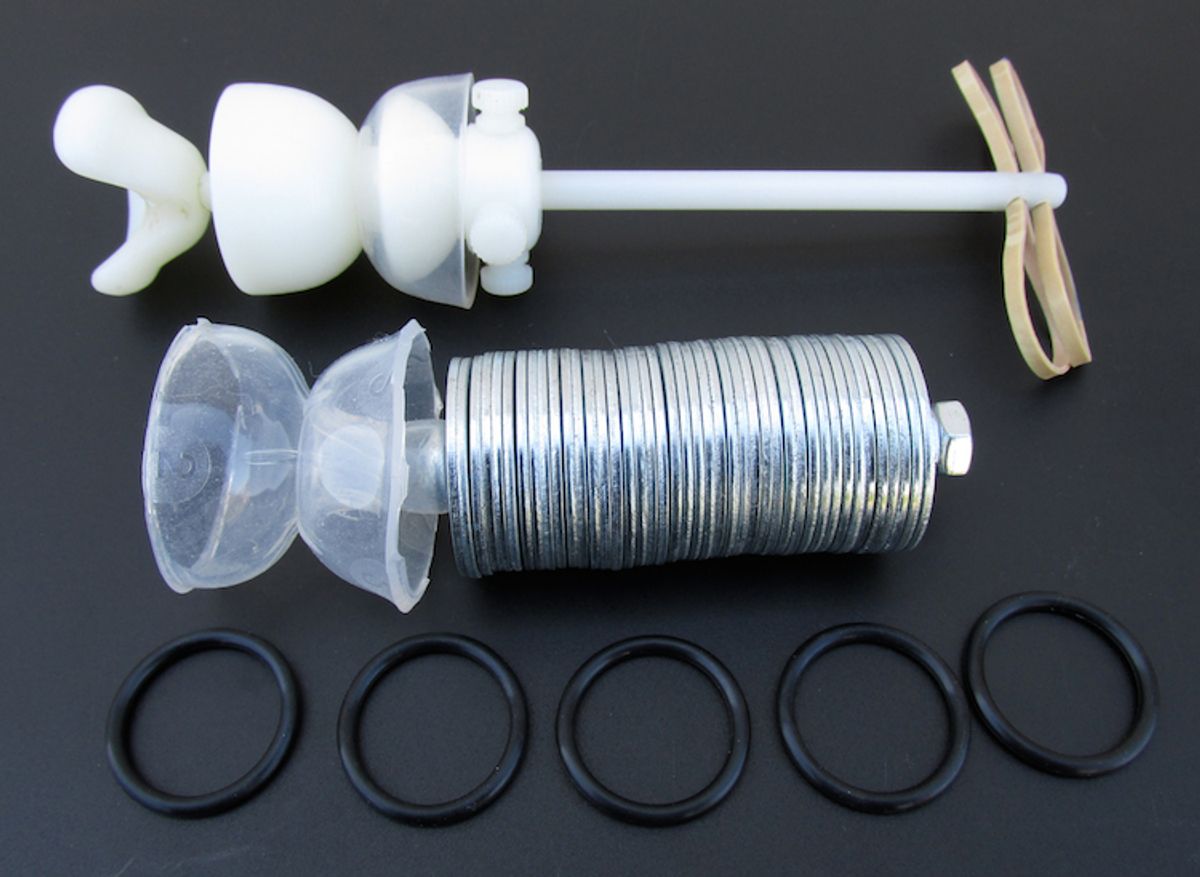 Last week, I posted an interview I did with Aaron Calloway, a young man who decided to get circumcised at age 21. Responses were mixed: Some readers told me they couldn't read enough about Calloway's experience, while others couldn't bring themselves to click the link. Two responses, in particular, stood out; they came from James Ketter and Juan Azalte, two anti-circumcision activists who hoped to tell me about their experiences with foreskin restoration.

Both men identify as "intactivists," members of a community that opposes genital cutting, specifically of boys. Ketter and Azalte have also both successfully achieved foreskin restoration, which is pretty much exactly what it sounds like: circumcised men can effectively "regrow" foreskins by placing tension on the remaining skin on the shaft of the penis, through a process known as "tugging." This specific method of growing new skin cells (to which Ketter even wrote a guide) lengthens shaft skin so that it eventually doubles over itself to extend over the glans; it's a process akin to opening gauges in one's earlobes, and can be achieved with a few hours of tugging each day. Some men, such as Azalte, wear devices that do the tugging for them. Others, such as Ketter, perform "manual tugging," which requires a bit more privacy.

Salon spoke with Ketter and Azalte by phone last week about their motivations to pursue foreskin restoration, the rub between bodily autonomy and sexual pleasure, and why both men actively oppose infant circumcision. They also described the radical difference in sensation they both experienced post-restoration. Our interview has been lightly edited and condensed for clarity.

First, I’m curious about how each of you got involved with foreskin restoration and any sort of anti-circumcision activism. What are each of your stories?

JK: My mother’s family, being very Catholic and French, did not partake of circumcision. My father’s family, of course, did. I was probably somewhere between 5 and 7 years old when I realized that I was the one that had something missing, and realizing that you’ve got something missing is a pretty key factor in this. When I was about 37 years old I finally realized how much anger I had over this and I said, “I have to do something.” Going online, searching that, led me to foreskin restoration.

Where do you think the anger came from? Was this more rooted in seeing that you were in some way different and knowing that you didn’t have to be, or was this related to issues of bodily autonomy, or even sexual pleasure?

So Juan, what about you? What guided you to restoration?

JA: My experience is a little bit different because I was born in Colombia and circumcision is not done there as a routine. But for whatever reason when I was 5 or 6 years old I was circumcised. The doctor said I had phimosis at the time. I know now that it’s really not that. The experience of the circumcision itself for me was traumatic because I wasn’t prepared for that, so I as a child the way I processed it was that they were going to cut off my penis. [Crying] I’m sorry. When I tell this, I’m sorry, I -- immediately, I think it’s post-traumatic stress.

James, you've mentioned that the No. 1 motivation for parents who decide to circumcise their children is the circumcision status of the father. So what do you think might be the best way to remove some of the social stigma that makes people believe that they need to match son with father?

JK: It’s education. You have to confront people's preconceived notions. What’s strange to me is if you go to a parent of a new child, and that new child has to go in for a surgery as they believe, you would think proving to them that that child doesn’t need the surgery would be a huge relief to the parent. But parents aren’t relieved. They’re very, very emotionally detached to the idea of genital cutting. I’ve said it many times, and I’ve yet to really be proven wrong, parents love the act of genital cutting more than they love their own children.

I have a question for you, Juan. You noted that you grew up in a culture that is essentially the reverse of the United States, where most men are not circumcised. Is there a similar sort of stigma where a child is just different?

JA: I think that up to 20 years ago, yes, that was probably the case. The men who were circumcised were stigmatized or a lot of times self-conscious, just because they didn’t fit properly, because they had the feeling that they were missing something. Sometimes they would find out in a locker room, if somebody else was taking a shower and they were not circumcised. And then they [the circumcised boys] find out that they were the ones subjected to a surgery. It usually was traumatic for them to realize what happened to them.

I wonder if you think that one path to change might be more open discussion about circumcision so it removes that situation where you have a young boy in a locker room learning, just by observing other people, that he’s different in some way. Do you think that if there were just discussion of it, if it were something that parents taught their children -- “Some boys are circumcised, some boys are not, this is what that means” -- that that would improve anything?

How do you think your path to restoration would have been different without the Internet? Because it sounds like both of you got most of your information from the Internet, so what would you have done without that access?

JK: It leads you to different books you can read, it leads you to different people you can meet, it brings you to forums. Foreskin-restoration.net [now foreskin-restoration.net/forums, a site run by another intactivist] has over 100,000 active members -- 100,000 that have come to it not through any form of advertising, not through any concentrated movement.

There’s clearly some tension between the issue of sexual pleasure and bodily autonomy here, because if one is to advocate for bodily autonomy, that means that maybe one day, if your son decided to get circumcised for his own reasons, that’s his prerogative. So how do you reconcile those things? What would you say if your son made a later in life decision to get circumcised?

James, you said your parents know about your decision to restore your foreskin. How do they feel about it? Did they change their minds about the decision to circumcise you?

JK: At first I started asking questions because knowing that my family, that my mother’s side of the family, does not partake of this ritual, I wanted some answers. And they became very, very defensive. It took them about a year to finally come around to the realization that, yeah, this was a mistake. My mother in passing one day asked me how it was going, and I replied, “It’s one of the best things I’ve ever done for myself.” She said, “I’m so glad,” and we ended the conversation at that. There was definitely a conflict period that I had to go through with my parents before we could really move forward with any kind of positive relationship.

Do you feel as if you’ve forgiven them or reached that point of acceptance?

What else do you think men should know about foreskin restoration?

JK: Well, there came a point, just like for Juan, where suddenly what remained of my inner foreskin was in contact with my glans and they were kind of rolling over each other. When they roll over each other, something happens exponentially. Your brain is designed from birth to feel that sensation, and when you feel that, “explosion” is an understatement. It suddenly opens up your entire body to a feeling that you’ve never felt before. A lot of people in foreskin restoration call it a full-body orgasm. Nothing a circumcised man can experience, no matter how good or how satisfied he is, can compare to that. It is a completely other dimension that we’re supposed to feel, it’s supposed to be there. But somebody, at birth, or at 5 years of age or whatever age, decided that I wasn’t worthy of ever experiencing that in my life. Feeling it for the first time changed me. You can’t remain silent anymore once you’re finally feeling how your body is supposed to function in a way that you’ve been denied all your life.