These days, molly on the small screen is as casual, upscale and ubiquitous as wine and cheese 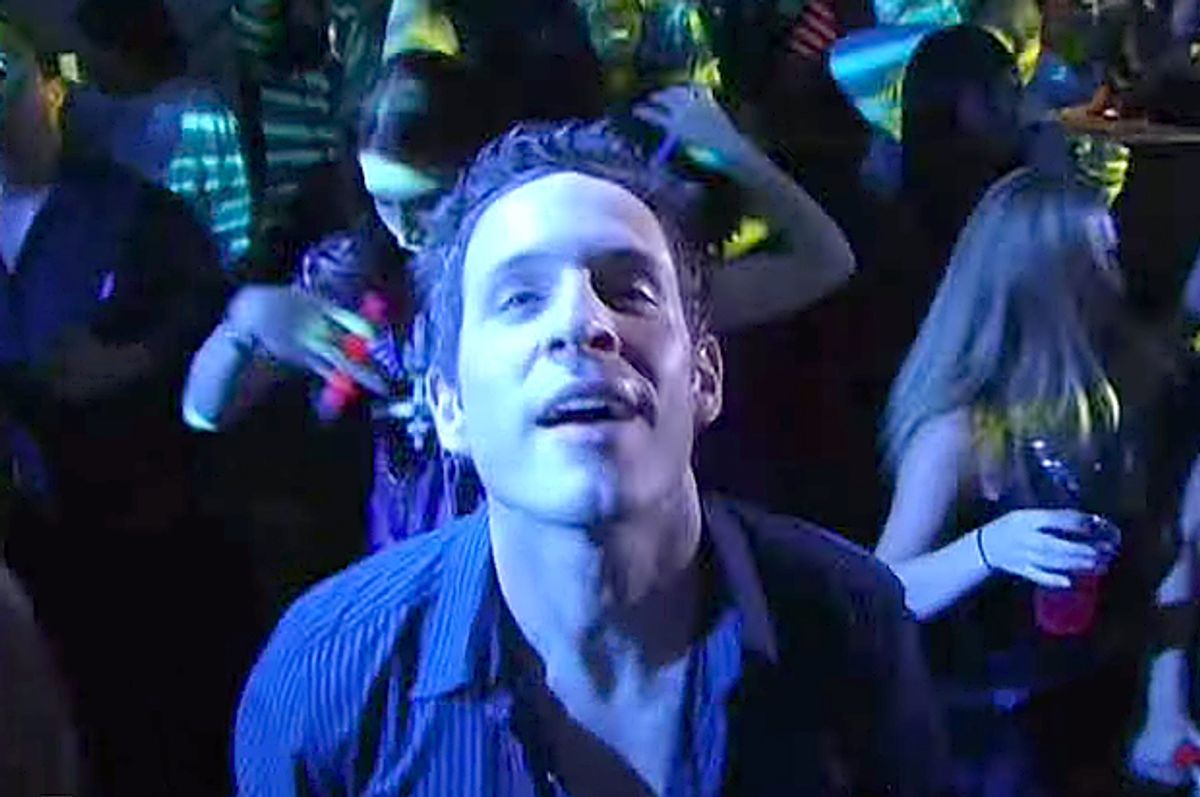 On the second season premiere of “Looking,” HBO's dramedy about three San Francisco-based gay men, the gang find themselves in the middle of the woods, heading to a rave suitably titled “The Promised Land.” Just before they get there, Agustín, the group’s resident wild child, whips out some pills for the group to pop. When asked what he's holding, Agustín responds with breezy nonchalance, as if he’s passing out a handful of Junior Mints: “It’s just molly.”

If you’ve read the recent clenched-knuckle youth trend pieces, you’ll know that molly (or MDMA, or ecstasy) is having its mainstream moment. As the Times put it in 2013, “thanks in part to that new friendly moniker, MDMA has found a new following in a generation of conscientious professionals who have never been to a rave and who are known for making careful choices in regard to their food, coffee and clothing.” Writers illustrate the drug’s ubiquity by pointing to the many mentions of the drug that have infused pop culture lyrics in recent years, from Jay Z’s "don't pop Molly, I rock Tom Ford” to Trinidad James’ "Popped a Molly, I'm sweatin” to Madonna’s “MDNA” album.

But pop music isn’t the only place where the drug has made its mark. Indeed, as molly has become more ubiquitous in everyday life, we have also seen the drug's impact trickle over onto the small screen. Crowd-sourcing suggestions from my friends, I received more than 20 examples of shows that had recently depicted recreational ecstasy use (including "Transparent," "The Carrie Diaries," "How to Make it in America," "Orphan Black," "Skins," "It's Always Sunny," "Peep Show," "Workaholics," "Californication" and "Party Down," to name just a few).

Certain drugs have been inextricably (and logically) associated with the criminal underworld on TV — crystal meth on “Breaking Bad” being the obvious example, or heroin on any cop show — while other drugs have been utilized for more wide-ranging narrative purposes. Marijuana, hallucinogens and even cocaine sometimes signify criminality or social dysfunction, but just as often they've been used to set up entertaining tangents and comic scenes (think the "Entourage" mushroom trip or Hannah and Elijah raving on coke on “Girls”).

Ecstasy, meanwhile, has traditionally been relegated to the narrative margins. Think of the most notable movies featuring ecstasy: “24 Hour Party People,” “Go,” "Human Traffic." Historically, the drug has been used as signifier of teenage rebellion gone wrong, or depicted as the exclusive property of niche subcultures known for heavy drug use, like rave culture. When ecstasy did show up on TV, it was generally to showcase the hazards of teen substance abuse, like on "Degrassi: The Next Generation" when Ashley takes a pill before a party and the evening ends in chaos (in the U.S., broadcaster The N held the episode back because of its controversial subject matter).

Remember when Andie took ecstasy on "Dawson’s Creek," and overdosed? As Dawson put it, “I remember when parties used to be bowling and birthday cakes, you know? Now they’re high-res adventures that could actually kill you. Another perk of growing up in the new millennium.” Well, yikes.

Frankly, it’s slightly bizarre encountering that finger-wagging "Dawson’s Creek" episode today -- sort of like watching "Reefer Madness" and episodes of "High Maintenance" back to back. Nowadays, everyone seems to be taking ecstasy all the time, and the consequences are far more likely to be a dance-off or a slightly awkward dinner party, not a near-death experience.

When the drug first started appearing on screen more frequently and in more innocuous forms, it was usually on British shows with a strong emphasis on nightlife, like "Skins" (an accurate representation, surely, of who was using the drug most). But in recent years, the drug has infiltrated North American television, and depictions of its use have grown increasingly cuddly and upscale-casual.

Back in the early 2000s, “Six Feet Under" was one of the first shows to depict a mainstream, middle-class family regularly using ecstasy (and pretty much every other drug too, to be fair). It began with David rolling with his boyfriend at a rave, but the show expanded the dramatic potential of the drug's effects by seeing how other characters reacted after ingesting it unintentionally — like his mother, Ruth, who accidentally mistakes it for aspirin before a camping trip and falls into a purple-tinged hallucination featuring a bear and her dead husband, or his brother Nate, who shows up to a family dinner party feeling extra affectionate, having made a similar mistake.

Last year on "Transparent," which has been hailed by many as the successor to “Six Feet Under” ("Transparent" creator Jill Soloway was a writer on “Six Feet Under”), we got another great scene of adult ecstasy use, where Ali, played by Gaby Hoffman, procures some MDMA and attempts to orchestrate a threesome. While it's something she plans excitedly in advance, it's hardly depicted as a bigger deal than inviting people over for wine and cheese. From Charlie and Marcy experimenting with E on "Californication" before a dinner party or Rachel and Darren taking it before a night out on "How to Make it in America," molly has been transformed into a lifestyle choice that mature, respectable  grownups -- okay, at least the semi-mature, quasi-respectable adults on our favorite TV shows -- can choose to do. Like smoking a joint or drinking a beer, it's seen as no big deal.

As the drug's taboo has diminished, we see it used more and more as a catalyst for comedic scenes. Because it lacks cocaine’s angry, jittery edge but offers more opportunities for heightened language and snuggle action than, say, weed, ecstasy can spark some pretty singular interactions. Add to that its association with parties and heedless debauchery, its comical physical symptoms (un-selfconscious dancing, making weird faces, stroking stuff) and its tendency to induce euphoria, diminish inhibition and encourage users to talk without filter, and you can see why pretty much every adult comedy has made use of it lately -- even animated ones.

For two recent iconic examples of the ecstasy-fueled dance scene, see "Eastbound and Down," where Kenny Powers busts out a mind-blowing routine after taking it before a middle school dance, and the "Workaholics" episode “Orgazmo Birth,” when Blake accidentally spikes the punch at a baby shower.

Indeed, the ecstasy-rave-dance scene might be one of the genre's greatest gifts -- Dennis busting a movie the Jersey Shore on "It's Always Sunny" is another highlight -- second perhaps only to the ecstasy montage (“The Interview" contains a prime example) in which a pill is popped and a rapid-fire barrage of absurd antics ensues.

Depictions range from highly stylized to realistic (Adam Scott and Lizzie Caplan sport perhaps the most spot-on high-faces ever on "Party Down"), but across the board, these laid-back or ridiculous scenes employ the drug as a vehicle for humor and whimsy, finding no need to teach a lesson at the end. And not to read too much into it, but the ubiquity of the drug on TV likely reflects an undercurrent of social acceptance and the softening of attitudes toward recreational drug use that's emerged over the last decade or so.

Take “Looking” -- as the gang's trip ends, the sun comes up over the lake. The guys reminisce about their night and regale one another with their conquests. Nobody has OD’d or tweaked out or ruined their lives. No great life lessons were learned. It’s a scenario that Dawson Leery would hardly recognize — and one that I suspect plenty of viewers may recognize all too well.