"We’ve seen the awful consequences": Why Greece refused to bow down to Western bankers 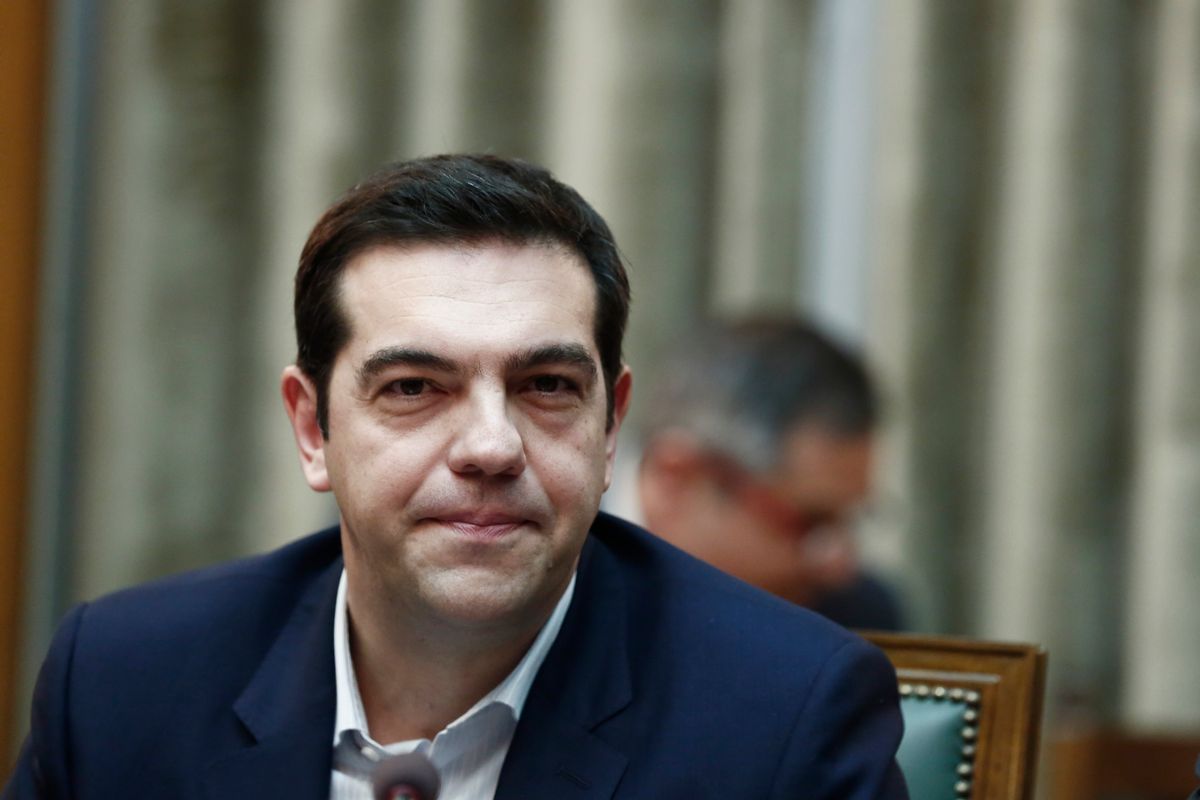 Mario Seccareccia, a professor of economics at the University of Ottawa, has been outspoken in his warnings that austerity policies have the potential to smash economies and spread human misery. In his work supported by the Institute for Economic Thinking and elsewhere, he has challenged deficit hawks and emphasized the need for strong government investment in things like jobs, education, healthcare, and infrastructure if economies are to prosper. In the following interview, he talks about why what happened to Greece was entirely predictable, why the Greeks were right to reject austerity in the recent election, and what challenges the country faces in forging a sustainable path forward with the left-wing Syriza party at the helm.

Lynn Parramore: You have long been warning of problems in the Eurozone.  What do the Greek elections mean to the debate about austerity and how it impacts economies?

Mario Seccareccia: I actually began warning about problems in the Eurozone even before they launched the Euro in 1999! A couple of years after the adoption, in 1992, of the Maastricht Treaty, which was the initial step in the creation the European Economic and Monetary Union or the Eurozone, I happened to be in Paris for the launch of a book that I had co-edited in French titled Les Pièges de l’Austérité (The Austerity Traps) that had been published in November 1993.

During the discussions, a number of us were already raising very serious questions about a treaty which prevented national governments from doing what they needed to do to stabilize their economies — namely engage in needed deficit spending, regardless of the magnitude, during times of recession for the purpose of stabilizing income and employment. Some of us at the book launch warned of problems that could arise from a European supranational currency and a central bank which was not accountable to any national authority and which would push countries merely to become hostages to the whims of the financial markets. Along with many others, I’ve also raised concerns over what economists call “deflationary bias” in the structure of the Eurozone — that is, the tendency for policies to focus on lower inflation instead of more jobs and growth and to prevent greater public spending as a means to achieve growth.

I could see that Greece would be the country that would be hit first by these problems because it is financially the weakest link in the euro chain, and because of the high public debt ratio when it joined the Eurozone in 2002.  What is surprising is that it took until 2010 to reach such a crisis even though the warnings had been there for a long time.  Even at the start of the global financial crisis in 2008-2009, most European governments started stimulating their economies or bailing out their banks as we saw in Ireland and Spain. But no major cracks appeared until the end of 2009 when the financial markets got spooked because the Greek authorities were found hiding Greek sovereign debt with the aid of advisors of financial institutions.

From 2010 onwards, Greece achieved notoriety because financial markets recognized that the country might decide not to comply with the terms of loan agreements with banks. Eventually in 2012, European leaders held a summit at the French resort of Deauville and agreed that if the private holders of sovereign debt wanted bailouts, they would be held responsible for the losses. Because of these developments since 2010, deficit hawks everywhere vilified Greece for all the supposed terrible consequences of government over-indebtedness, even though the structure of the Eurozone made it impossible for Greece to manage its economy effectively.

Deficit hawks started preaching long-term austerity, and we’ve seen the awful consequences ever since. People have suffered terrible hardship and dislocation, with countries such as Greece and Spain reaching rates of unemployment worse that what happened in the United States in depth of the Great Depression. You’d be hard-pressed to find examples of such a severe collapse historically, with the possible exception of certain Latin American countries, such as Argentina in 2001. Those who predicted that that this austerity policy would eventually lead to an economic turnaround because of the belief in private sector rebound obviously got it wrong. After five years of negative economic growth, the Greek electorate — with incredible courage — told the so-called Troika that they had had enough, especially with these deep cuts in wages, employment, and pension transfers.

LP: How have the news media and the pundits gotten the story of Greece’s economy wrong?

MS: Ever since the end of 2009 when the story of Greece’s sovereign debt crisis began to unfold, austerity-pushing political leaders around the world have been saying that their country must not become the “next Greece.” Together with much of the international media, they have been perpetuating the view that government deficits are bad and that governments must seek balanced budgets, even if it means some necessary “temporary” hardship. Yet, the experience of the 1930s, which is being repeated with such vengeance in the Eurozone since 2010, is that pursuing austerity policies alone without some other outside stimulus, say, from increased net exports, can’t lead to balanced budgets. Instead, it leads to disaster. These policies destabilize the private sector to such an extent that they actually jeopardize chances of any future recovery. Many Greek citizens felt that they had reached this threshold and wanted a reversal of policy.

LP: Tsipras has promised to reverse some tax hikes and cuts to social services, but Greece is still in the Eurozone. Because, as you mention, it doesn’t have control of its own currency, the Greeks will have to negotiate with the so-called Troika of the European Union, IMF and the European Central Bank. Do you think there is a possibility for meaningful changes given this challenge? And how might internal Greek political problems, especially with Tsipras' possible coalition partners, affect the situation?

MS: This is the “million euro” question: how can the Greek state invest in its economy while still remaining in the Eurozone? Syriza faces a huge challenge politically since the pro-austerity parties in Greece, i.e. New Democracy, LAOS, PASOK, Democratic Left, KIDISO, and POTAMI, still constitute a fairly large block of the vote and the majority of the electorate would seemingly still prefer to remain in the Eurozone. Since it doesn’t have a mandate to take Greece out of the Eurozone, what other options are available?

We have seen already how Germany has warned the new Greek government that it must live up to commitments to its creditors, and with Greece's current bailout program ending in February it will have little breathing room. There may well be a willingness to give the Greek government more time to make its debt payments, but the present Troika seems rather uninterested in outright debt cancellation, even if there may be some desire to negotiate some smaller changes, like the creation of a distinct Eurozone-wide public investment fund which might do things like build and repair roads or support clean energy projects and generate sufficient overall growth, especially in the rest of Eurozone, to perhaps spill over into Greece and turn around its current account balance and also raise government revenues.

All of this means negotiations with many partners that will take time for the present coalition government. On the other hand, the Greeks could get some short-term relief with the depreciating euro in terms of increased net exports for all countries of the Eurozone. Also in the short term, there is the European Central Bank’s commitment to do quantitative easing, or pumping new money into the economy. I have argued that quantitative easing doesn’t work to stimulate private sector spending, but it might help backstop what would have been an eventual financial collapse of a number of Eurozone countries. A lot depends on how big the European Central Bank is willing to go with its plans. If the action was bold enough, Greek banks could benefit indirectly and it could give the Greek government some breathing room and prevent a default, assuming its current creditors demand payment. In the medium term, Greece could create some form of parallel currency set at par with the euro, like Argentina did in the early 2000s. The government in Argentina used “patacones” to buy things and pay employees and they became quite acceptable because ultimately regular people could pay taxes with this currency. The Greeks could have a parallel national currency without altogether abandoning the euro.

So these various short-to-medium-term measures may well be available to prevent default, but, at the end, if the Greek government cannot renegotiate its crushing debt burden — without some form of debt forgiveness in however form it will be disguised — you could see a Greek default happen. If it reaches that point, I don’t think there’s anything in the Eurozone treaties that would prevent Greece from retaining the euro. In this case, it will have to learn from the experiences of dollarized countries such as Ecuador that have been surviving under very severe constraints on fiscal policy but without the oil revenues that until recent times have served well to replenish Ecuador’s coffers.

LP: Lots of countries, like Italy, Spain, Portugal, and maybe even France, are getting close to the distressed economic conditions of Greece. How will a Syriza government in Greece impact them? How do you think those governments will relate to Germany after the election?

MS: I believe that this will give a huge boost to those anti-austerity parties, especially in southern Europe, that are in a similar situation to Greece. That’s going to put further pressure on Germany to accommodate. But it will also boost the support of the nationalist right-wing anti-euro parties, as in France. If all these parties manage to achieve power, it may well be either that the Eurozone countries establish ways for countries to have more latitude in taking action to stabilize their economies.

If some of the right-wing parties come to power, such as the National Front in France, it will mean the end of the euro. The withdrawal of a core country such as France from the Eurozone could lead to currency realignments at the regional levels, without any chances for the survival of the entire Euro bloc.

LP: Do you think there are lessons in what has happened in the Eurozone for students of economics and the way the subject is taught?

MS: Yes, indeed. Ever since the establishment of the modern nation-state in the late eighteenth and nineteenth centuries, the creation of the euro was perhaps the first significant experiment in modern times in which there was an attempt to separate money from the state, that is, to denationalize currency, as some right-wing ideologues and founders of modern neoliberalism, such as Friedrich von Hayek, had defended. What the Eurozone crisis teaches is that this perception of how the monetary system works is quite wrong, because, in times of crisis, the democratic state must be able to spend money in order to meet its obligations to its citizens. The denationalization or “supra-nationalization” of money with the establishment that happened in the Eurozone took away from elected national governments the capacity to meaningfully manage their economies. Unless governments in the Eurozone are able to renegotiate a significant control and access money from their own central banks, the system will be continually plagued with crisis and will probably collapse.