My neighborhood revolution, one letter at a time

When a friend told me he was illiterate, I explained reading freed me. His response sparked a new sense of urgency 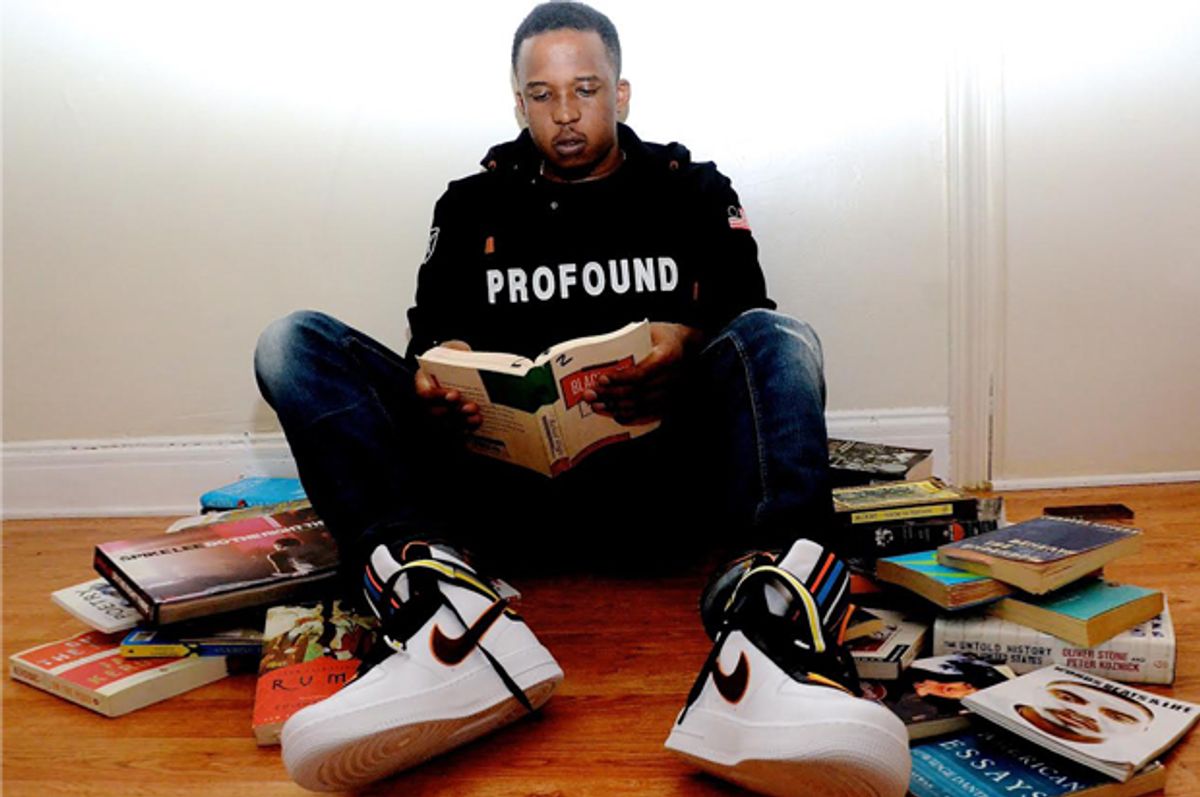 A photo of the author (David Manigault)
--

“Feed up time, homies! Line that ass up!” yelled Deion, sweating like Pat Ewing in the fourth quarter over that scraped charcoal grill by the gate.

He had packed it with little wings, salty turkey franks and saltier turkey burgers on a 90-plus degree day down in Bocek Park.

It’s Sunday so old heads like me throw on Under Armour mixed with Nike Dry Fit and try to blend in with the high schoolers on the blacktop ⎯ the up-and-coming stars. For hours we competitively throw crossovers, jump shots and slurs at each other in fun and peace. I lost my second game and two’s my max, so I hit the grill line.

“Yo are these chicken or pigeon wings?” I asked.

We all laughed and said definitely pigeon. I threw three on my plate, snatched a Deer Park from the cooler and found a spot in the shade. Dub rolled up on me looking all urgent and uneasy with smirked eyebrows like, “ Yo, yo, lemme rap to you right quick, D.”

My wings and I hopped up and followed him toward the street. He’s built like a six-burner Viking stove in work boots. I remember when he was ripped like a protein-powder model, but this food makes us all fat and sick.

He dug in his pocket and pulled out a folded letter.

“Yo if you tell somebody, Ima kill you, in real life,” he mumbled. Someone from the court asked if I had next, but I waved them off.

“Yo you sick or something? What’s going on?”

He told me that he had been talking on the phone with his daughter in North Carolina at least once a week. She had the bright idea of them exchanging letters and had even sent the first one.

“So what you want me to help you write a letter?” I asked. “Isn’t that personal?”

“Naw D. I want you to read it for me. I don’t know what she talking about. Don’t tell nobody man I swear!”

He looked down at his boots and kicked gravel. I wondered how could a 45-year-old man not know how to read?

I first thought of Dexter Manley, the former Washington Redskin who graduated high school, spent four years at Oklahoma State, and made it to the pros all while being illiterate. His talents allowed him to be robbed of his education.

In a way, Dub is like Manley. Before he landed his city job, way back before his prison bit ⎯ Dub was an enforcer, which is the guy who beat up the guys who owed the kingpins money. Some debtors got dangled out of windows; others he’d run down until they were breathless and then grind the heel of his boot into their gum line. Reading wasn’t a requirement for his job, and he made plenty of money, just like Manley.

We used to call his overhand right the sleeper because every dude that caught it went right to sleep and Dub didn’t believe in picks or choices. He knocked out young guys, teenagers, old heads, dope fiends, student athletes, street guys, rappers and church boys.

“Walk me to the store, man,” I said. He followed me up Madison and down Curley, “So do you want me to teach you how to read?”

He said no because he was too old, he’d gotten this far without reading and his brain doesn’t work that well anymore.

“I got love for you my brother, but your answer sounds like something that only a person who couldn’t read would say! I’m not reading your letter unless you let me or someone else teach you. It’ll be between us.”

“Naw, man, I work and I’m out the street yo. I just wanna know what her letta say and maybe get one back. I’ll pay you, but I ain’t learnin readin, shit borin anyway.”

“Reading is boring” is a phrase I’ve been hearing at the beginning of each semester from the freshmen at Coppin State University, where I teach English 101. I give them my soliloquy on why it was illegal for slaves to read and how easy it was for masters to control populations of people with limited thoughts ⎯ partially due to illiteracy. I usually say, “Being smart and developing complex thoughts without reading is like trying to get Schwarzenegger muscles without working out.”

Then I assign books like “Buck” by MK Asante, “Decoded” by Jay Z and “The Other Wes Moore” by Wes Moore. I also scour the Internet for articles that speak directly to them. I believe that everyone would enjoy reading if they had the right material. Obtaining that material would not only provide the foundation for the basic skills needed but also spark a greater interest in literature outside of the classroom.

As a kid I was only introduced to books like "Tom Sawyer" and "Huck Finn" ⎯ those books made me shun literature. Now I understand how great Mark Twain is, but as kid I came from a neighborhood with shootouts, dirt bikes, police raids, junkie fights, block parties and hoop tournaments. Adventures happened every day and Twain seemed corny to kids like us ⎯ fences weren’t being whitewashed with paint but sidewalks were being red-washed with blood and we were in the mix.

I wasn’t hooked on books until I read Sista Souljah’s “The Coldest Winter Ever,” “Clockers” by Richard Price and a few Sherman Alexie essays. Those books opened up my mind and led to me consuming more and more. My thoughts changed, I developed new ideas and I was forever transformed. Within months I went from a guy who solved problems by breaking a bottle over someone’s forehead to using solution-based thinking when resolving issues ⎯ reading instantly civilized me. And if it can work for me, I believe it can work for anybody.

Dub and I spit sunflower seed shells out on the way back to the court. I stopped and read the letter to him after he asked for the ten-thousandth time. She closed with “Thank you for the extra cash ☺ I can’t believe I’m finally off to college. I love you. You’ll always be a part of me and even though you weren’t there in the beginning, I’m blessed to have you here now.”

Dub paused and snatched the letter. He turned away and said, “Hol up D, I gotta go down here right quick yo. I’ll see on the court.”

“Yo are you crying?” I asked. “That’s enough of a reason to learn! Right?”

He continued down Curley Street without a response.

For weeks after, I thought about Dub and his daughter, wondering what I could do. To date I’ve written essays that have been read by thousands but most of my friends in Baltimore, where only 7 percent of African-American males in the eighth grade read on grade level ⎯ haven’t clicked on one. This disgusting reality has advanced my focus.

Initially I wanted to raise awareness on the ills affiliated with the modern black experience by telling stories straight from my neighborhood, and it’s working because outsiders are responding to me and sharing their changes and updated perspectives through tweets and email; however, waiting for that influence to trickle down into my neighborhoods isn’t enough.

I’m responsible for sharing the power of reading with as many low-income people as I can reach. Not being able to reach everyone does not exempt me from making a conscious effort to push literacy every day in the streets, online and in the schools.

I will do this by continuing to create material that is relatable to nontraditional readers and, more important, encouraging more people to write, so if my story doesn’t resonate with a segment of readers, someone else’s will.

I caught up with Dub at a '90s party a week ago. Most of the guys from the court in the summer were present in their old-school Cross Colour jeans and Kani sweats. Dub was fresh in Nautica, New Balance and square frames just like when I met him back in the day.

“Yooooo you look at fat ass Uncle Phil version of the Dub I knew in 96!” I yelled, giving him a pound and a hug. The same bullshit pigeon wings were being served with chips, a Subway platter and a bunch of alcohol. I pulled Dub to the side and said, “Yo I’m still down on that reading thing we rapped about if you want man. I’m in the City Paper on the positive tip and you can’t even check me out.”

He inhaled four or five wings at a time, and spit the bones out like shotgun shells.

“D congrats my homie, but I ain’t got the time. I’ma save your write-up tho. I gotta second job now so I’m sendin my baby girl more college money. She the smart one and that’s good for enough for me!”

That was good enough for him, but not for me. I know that literacy plays a key role in communication and our failure to communicate is evident in the crowded jails, the trash pigeon wings we eat, the multiple police shootings and the many racial divides in America in general. Dub’s OK being one of the 32 million people in America who can’t read and I can’t force him to because he’s way bigger than me ⎯ but I am going to do everything in my power to make reading cool and destroy that Dub mentality, which is so common in Baltimore and many other low-income areas across America.

The number of illiterate people in our country is criminal. The number of people who are aware of the literacy rate and choose to do nothing is even more criminal. Convincing people to read in a society where the primary use for books is decorations and drink coasters will be extremely difficult; however, I think we can do it if we work together collectively and just take it one word, one sentence, one paragraph and one book at a time.