The sharing economy is a lie: Uber, Ayn Rand and the truth about tech and libertarians 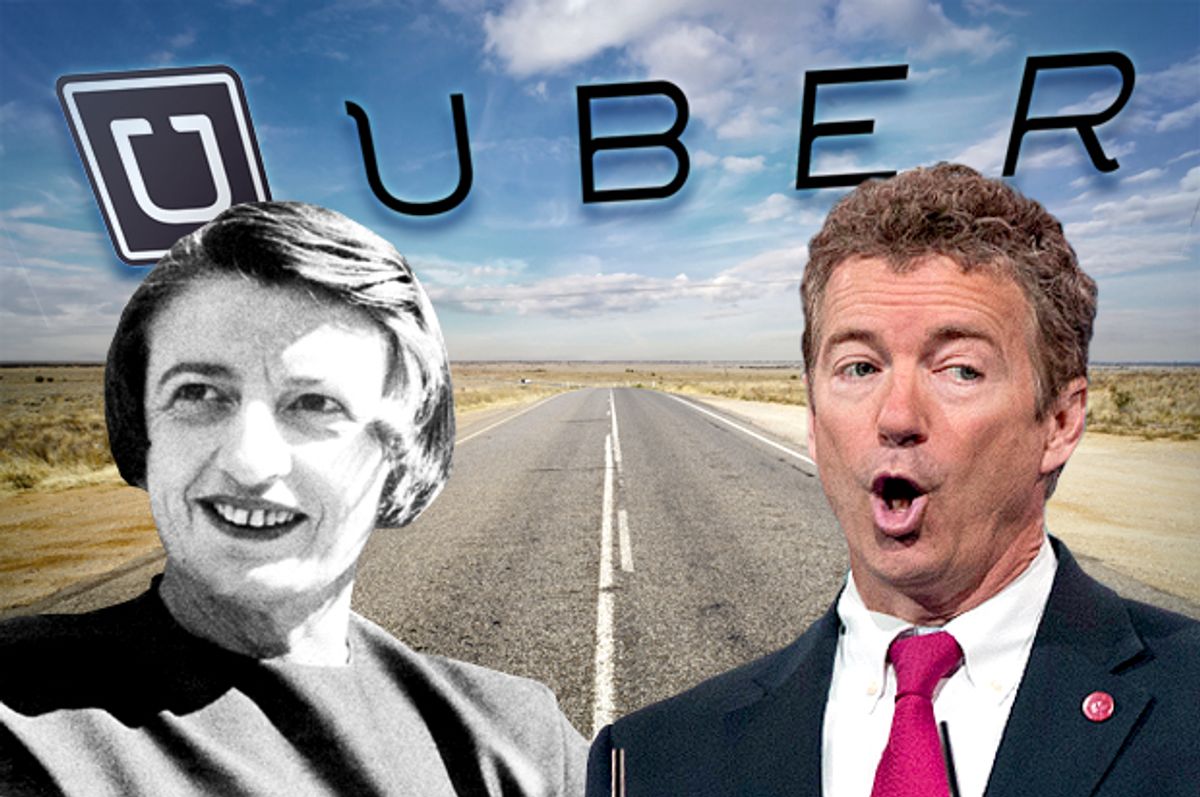 Horror stories about the increasingly unpopular taxi service Uber have been commonplace in recent months, but there is still much to be learned from its handling of the recent hostage drama in downtown Sydney, Australia. We're told that we reveal our true character in moments of crisis, and apparently that's as true for companies as it is for individuals.

A number of experts have challenged the idea that the horrific explosion of violence in a Sydney café was “terrorism,” since the attacker was mentally unbalanced and acted alone. But, terror or not, the ordeal was certainly terrifying. Amid the chaos and uncertainty, the city believed itself to be under a coordinated and deadly attack.

Uber had an interesting, if predictable, response to the panic and mayhem: It raised prices. A lot.

In case you missed the story, the facts are these: Someone named Man Haron Monis, who was considered mentally unstable and had been investigated for murdering his ex-wife, seized hostages in a café that was located in Sydney's Central Business District or “CBD.” In the process he put up an Islamic flag – “igniting,” as Reuters reported, “fears of a jihadist attack in the heart of the country's biggest city.”

In the midst of the fear, Uber stepped in and tweeted this announcement: “We are all concerned with events in CBD. Fares have increased to encourage more drivers to come online & pick up passengers in the area.”

As Mashable reports, the company announced that it would charge a minimum of $100 Australian to take passengers from the area immediately surrounding the ongoing crisis, and prices increased by as much as four times the standard amount. A firestorm of criticism quickly erupted – “@Uber_Sydney stop being assholes,” one Twitter response began – and Uber soon found itself offering free rides out of the troubled area instead.

What can we learn from this incident? Let's start by parsing that tweet:

“We are all concerned with events in CBD ...”

That opener suggests that Uber, as part of a community under siege, is preparing to respond in a civic manner.

“... Fares have increased to encourage more drivers to come online & pick up passengers in the area.”

But, despite the expression of shared concern, there is no sense of civitas to be found in the statement that follows. There is only a transaction, executed at what the corporation believes to be market value. Lesson #1 about Uber is, therefore, that in its view there is no heroism, only self-interest. This is Ayn Rand's brutal, irrational and primitive philosophy in its purest form: altruism is evil, and self-interest is the only true heroism.

There was once a time when we might have read of “hero cabdrivers” or “hero bus drivers” placing themselves in harm's way to rescue their fellow citizens. For its part, Uber might have suggested that it would use its network of drivers and its scheduling software to recruit volunteer drivers for a rescue mission.

Instead, we are told that Uber's pricing surge was its expression of concern. Uber's way to address a human crisis is apparently by letting the market govern human behavior, as if there were (in libertarian economist Tyler Cowen's phrase) “markets in everything” – including the lives of a city's beleaguered citizens (and its Uber drivers).

Where would this kind of market-driven practice leave poor or middle-income citizens in a time of crisis? If they can't afford the “surged” price, apparently it would leave them squarely in the line of fire. And come to think of it, why would Uber drivers value their lives so cheaply, unless they're underpaid?

One of the lessons of Sydney is this: Uber's philosophy, whether consciously expressed or not, is that life belongs to the highest bidder – and therefore, by implication, the highest bidder's life has the greatest value. Society, on the other hand, may choose to believe that every life has equal value – or that lifesaving services should be available at affordable prices.

If nothing else, the Sydney experience should prove once and for all that there is no such thing as “the sharing economy.” Uber is a taxi company, albeit an under-regulated one, and nothing more. It's certainly not a “ride sharing” service, where someone who happens to be going in the same direction is willing to take along an extra passenger and split gas costs. A ride-sharing service wouldn't find itself “increasing fares to encourage more drivers” to come into Sydney's terrorized Central Business District.

A “sharing economy,” by definition, is lateral in structure. It is a peer-to-peer economy. But Uber, as its name suggests, is hierarchical in structure. It monitors and controls its drivers, demanding that they purchase services from it while guiding their movements and determining their level of earnings. And its pricing mechanisms impose unpredictable costs on its customers, extracting greater amounts whenever the data suggests customers can be compelled to pay them.

This is a top-down economy, not a “shared” one.

A number of Uber's fans and supporters defended the company on the grounds that its “surge prices,” including those seen during the Sydney crisis, are determined by an algorithm. But an algorithm can be an ideological statement, and is always a cultural artifact. As human creations, algorithms reflect their creators.

Uber's tweet during the Sydney crisis made it sound as if human intervention, rather than algorithmic processes, caused prices to soar that day. But it doesn't really matter if that surge was manually or algorithmically driven. Either way the prices were Uber's doing – and its moral choice.

Uber has been strenuously defending its surge pricing in the wake of accusations (apparently justified) that the company enjoyed windfall profits during Hurricane Sandy. It has now promised the state of New York that it will cap its surge prices (at three times the highest rate on two non-emergency days). But if Uber has its way, it will soon enjoy a monopolistic stranglehold on car service rates in most major markets. And it has demonstrated its willingness to ignore rules and regulations. That means predictable and affordable taxi fares could become a thing of the past.

In practice, surge pricing could become a new, privatized form of taxation on middle-class taxi customers.

Even without surge pricing, Uber and its supporters are hiding its full costs. When middle-class workers are underpaid or deprived of benefits and full working rights, as Uber's reportedly are, the entire middle-class economy suffers. Overall wages and benefits are suppressed for the majority, while the wealthy few are made even richer. The invisible costs of ventures like Uber are extracted over time, far surpassing whatever short-term savings they may occasionally offer.

Like Walmart, Uber underpays its employees – many of its drivers are employees, in everything but name – and then drains the social safety net to make up the difference. While Uber preaches libertarianism, it practices a form of corporate welfare. It's reportedly celebrating Obamacare, for example, since the Affordable Care Act allows it to avoid providing health insurance to its workforce. But the ACA's subsidies, together with Uber's often woefully insufficient wages, mean that the rest of us are paying its tab instead. And the lack of income security among Uber's drivers creates another social cost for Americans – in lost tax revenue, and possibly in increased use of social services.

The company's war on regulation will also carry a social price. Uber and its supporters don't seem to understand that regulations exist for a reason. It's true that nobody likes excessive bureaucracy, but not all regulations are excessive or onerous. And when they are, it's a flaw in execution rather than principle.

Regulations were created because they serve a social purpose, ensuring the free and fair exchange of services and resources among all segments of society. Some services, such as transportation, are of such importance that the public has a vested interest in ensuring they will be readily available at reasonably affordable prices. That's not unreasonable for taxi services, especially given the fact that they profit from publicly maintained roads and bridges.

Uber has presented itself as a modernized, efficient alternative to government oversight. But it's an evasion of regulation, not its replacement. As Alexis Madrigal reports, Uber has deliberately ignored city regulators and used customer demand to force its model of inadequate self-governance (my conclusion, not his) onto one city after another.

Uber presented itself as a refreshing alternative to the over-bureaucratized world of urban transportation. But that's a false choice. We can streamline sclerotic city regulators, upgrade taxi fleets and even provide users with fancy apps that make it easier to call a cab. The company's binary presentation – us, or City Hall – frames the debate in artificial terms.

Uber claims that its driver rating system is a more efficient way to monitor drivers, but that's an entirely unproven assumption. While taxi drivers have been known to misbehave, the worldwide litany of complaints against Uber drivers – for everything from dirty cars and spider bites to assault with a hammer, fondling and rape – suggest that Uber's system may not work as well as old-fashioned regulation. It's certainly not noticeably superior.

In fact, prosecutors in San Francisco and Los Angeles say Uber has been lying to its customers about the level and quality of its background checks. The company now promises it will do a better job at screening drivers. But it won't tell us what measures its taking to improve its safety record, and it's fighting the kind of driver scrutiny that taxicab companies have been required to enforce for many decades.

Many reports suggest that beleaguered drivers don't feel much better about the company than victimized passengers do. They tell horror stories about the company's hiring and management practices. Uber unilaterally slashes drivers' rates, while claiming they don't need to unionize. (The Teamsters disagree.)

The company also pushes sketchy, substandard loans onto its drivers – but hey, what could go wrong?

Uber has many libertarian defenders. And yet, it deceives the press and threatens to spy on journalists, lies to its own employees, keeps its practices a secret and routinely invades the privacy of civilians – sometimes merely for entertainment. (It has a tool, with the Orwellian name the “God View,” that it can use for monitoring customers' personal movements.)

Aren't those the kinds of things libertarians say they hate about government?

This isn't a “gotcha” exercise. It matters. Uber is the poster child for the pro-privatization, anti-regulatory ideology that ascribes magical powers to technology and the private sector. It is deeply a political entity, from its Nietzschean name to its recent hiring of White House veteran David Plouffe. Uber is built around a relatively simple app (which relies on government-created technology), but it's not really a tech company. Above all else Uber is an ideological campaign, a neoliberal project whose real products are deregulation and the dismantling of the social contract.

Or maybe, as that tweeter in Sydney suggested, they're just assholes.

Either way, it's important that Uber's worldview and business practices not be allowed to “disrupt” our economy or our social fabric. People who work hard deserve to make a decent living. Society at large deserves access to safe and affordable transportation. And government, as the collective expression of a democratic society, has a role to play in protecting its citizens.

And then there's the matter of our collective psyche. In her book "A Paradise Built in Hell: The Extraordinary Communities that Arise in Disaster," Rebecca Solnit wrote of the purpose, meaning and deep satisfaction people find when they pull together to help one another in the face of adversity.  But in the world Uber seeks to create, those surges of the spirit would be replaced by surge pricing.

You don't need a “God view” to see what happens next. When heroism is reduced to a transaction, the soul of a society is sold cheap.