Sadly, no word from the infamous left shark 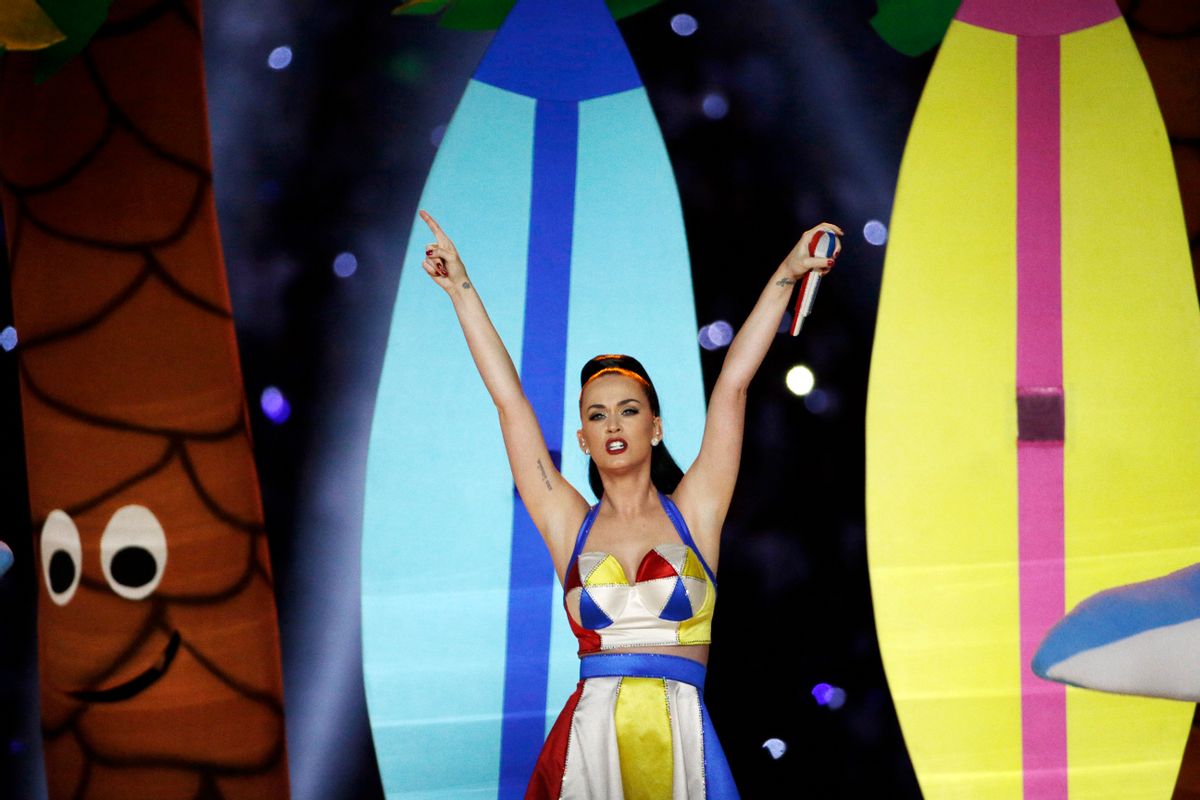 After their show-stopping Super Bowl halftime performance, two of Katy Perry's dancing palm trees took to Reddit to answer the world’s pressing questions about the show (they shared photographic proof of their involvement, and it looks legit). The answers included first-person takes on Katy Perry (she was okay) and a scandalous reveal about why the sharks didn’t appear to know their dance moves: because they were last-minute replacements for a local college dance troupe. Meanwhile, someone purporting to be the right shark has also made an appearance on Reddit, although sadly no word from the infamous left shark. Read on!

The trees got their gigs through the ASU marching band:
"It was actually through Arizona State marching band. They posted about needing 30+ people for what was known then as the Sunshine Cast (Inflatables in California Gurls), and then a second post was made looking for 6'0" or taller slim guys for prop crew. The marching band was already set to play at the Super Bowl since nearly a year ago, so I'm assuming they saw that as an easy way to get people that actually have a clue about timings and musical cues."

The sharks were replaced by Katy Perry's dancers at the last minute (no word on which, if any, of the dancers were stolen from Taylor Swift):
"The sharks were originally supposed to be dancers from Mesa Community College but 2-3 days before the performance Katy decided she wanted her own people in costume....The worst part is the MCC dancers had been practicing it for much longer and definitely knew it better at least in my opinion."

The trees were nearly naked underneath:
"We were in unitards with only boxer-briefs or compressions shorts on underneath, so pretty close."

Katy seemed nice enough:
"She showed up to our Props Cast rehearsal on Monday and said hi. That's the closest any of us got to meeting her. She seemed nice, bubbly personality. Also she has the cutest damn dog, it looks like a teddy bear."

But was a little nervous:
"I honestly can't say for sure. When she showed up to our rehearsal she seemed nice and said hi to all of us. During some of the full dress rehearsals she would get a little antsy. In my opinion I think that's because it was the biggest performance of her career and she wanted to do it right."

The trees'  mouths really did move:
"Our mouths definitely moved. We had to use our hands to flip the upper lip to simulate singing along to the chorus. For the sharks they would actually pull one hand out of the fin to operate the mouth."

There were some weight and balance issues with the costumes:
"The trees were really top heavy so all of us were hoping not to fall over in the middle of the performance. Me especially because my tree was the problem child of the group."

Katy’s quick changes were quite an operation:
"There was an entire wardrobe crew dressed in white haz-mat-like outfits devoted to sprinting on/off the stage and changing her clothes, which were, for the most part, snap-on."

The rehearsal process was pretty arduous:
"We started on January 22nd. We had two sectionals on the 22nd and 23rd. Then on Sunday we had a put together rehearsal with the orbs (both opening and closing orbs). That Monday and Tuesday were another sort of sectional put together rehearsal. Wednesday-Friday were the full dress rehearsals in the stadium. The sectionals were shorter but the put-together and dress rehearsals were usually 3-4 hours long."

And they didn't get paid:
"I volunteered and I'm not upset that I didn't get paid. It was a great experience and I got to work with some great people. Definitely worth it."

On the plus side, the tree that Katy was grinding up against could feel everything:
"The foam was actually slightly under an inch thick, so I could feel nearly every touch from her. Originally, Katy wasn't coreographed to walk over to me, but when she arrived at the rehearsal location, the staging was changed to better fit the lyrics of the song ("... underneath the palm trees.")"