The pop star owned her stage, even opposite the legendary Missy Elliott 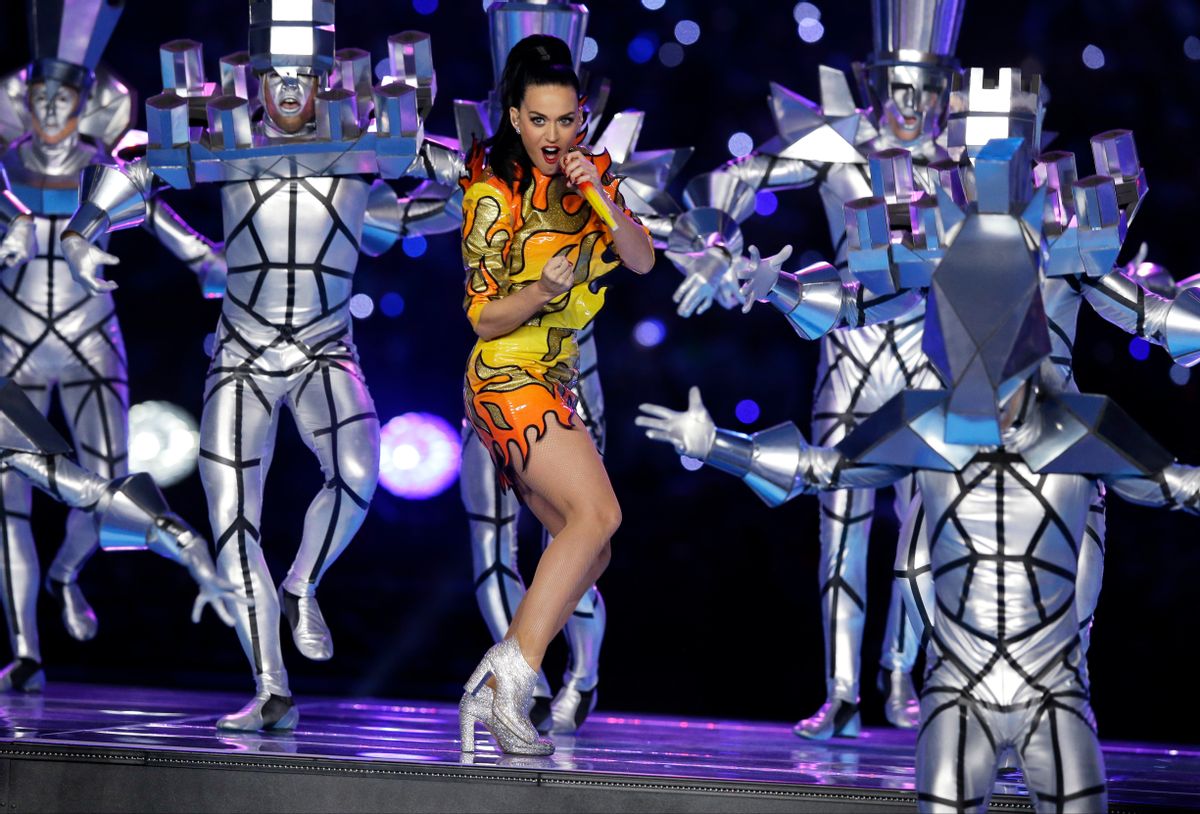 The football game—really the footnote to the proceedings—was tied, at the half. Fourteen points each and lackluster play. The commentators and fans talked the game, speculating on Tom Brady’s mindset and Richard Sherman’s injury, but the game was a contest between a despised team and the reigning champions. And despite its eventual nail-biting ending, as the game slowly got underway, it seemed like the real story of the night was the increasingly bizarre parade of commercials, trotting out #dadfeels, Lindsay Lohan, the confusing idea that Coca-Cola could quash cyberbullying, and a dead boy killed in a preventable accident. This year more than usual was about watching the advertisements trying to sell things to #real #Americans, counting off how many ads were going to touch our heartstrings with double amputees, puppies in the rain, or dads who worry about their children.

Then Katy Perry strapped herself to a rocket and flew across the sky.

It was a firework, technically, and she was airlifted with the help of wires and a small platform that allowed her to show some leg from the slit of her starry gown while providing accompanying vocals to a mostly pre-recorded track. You do not have to feel like a plastic bag, America. Instead you can feel like you are windsurfing in the wake of the “More You Know” shooting star, while the ground lights up in concentric circles of color, and a hundred dance extras hold colored balls over their heads. Did I imagine it, or did the ball-bearers dip their trophies to Perry, aloft on her chariot of fire, in near-genuflection? (No, I did not.)

Katy Perry is not a diva; she doesn’t have either the rich, belting vibrato or the wide range of the world’s best singers. If you’ve ever tried to sing one of her songs at karaoke, you may know this already—the vocals for her songs are mostly talk-sung, and where they get tough, they tend to skew either high-pitched and tinny (“Teenage Dream” and “California Gurls”) or overproduced (“Dark Horse,” “Roar”). But if she’s relatively short on talent., she makes up for it with spectacle. Katy Perry throws a show like no other, and tonight’s Pepsi halftime show proved it. Lenny Kravitz was an accessory; not-so-surprise guest Missy Elliott injected a note of prestige to the proceedings. But it was Perry’s fireworks show.

That’s the thing about pop music—it’s theatre, in a world with many stages. Perry is less a singer and more an amalgamation of makeup, costuming, elaborate set pieces, and an upbeat narrative. The songs, with their canned beats and simplistic lyrics, are just vehicles for the message. And the message itself is something like “everything is awesome,” which is, if simplistic, sometimes in fact true. Perry’s set lacked the scandal and sexuality of Janet Jackson and Justin Timberlake, the raw talent and charisma of Beyonce’s, the edge, such as it is, of the Red Hot Chili Peppers (even if they were joined by Bruno Mars). What Perry’s set did have, though, was whimsy—flights of fancy that were sexy and funny enough that they didn’t become twee. She turned the stage into her own little wonderland.

I mean: Perry started out the set dressed in a dress approximating flames, riding a parade-float sized mirrored lion that looked animatronic, though it was actually controlled by some very skilled puppeteers guiding its legs. Resplendent at the top, she was the image of a conquering hero being welcomed at the city gates; she took the opportunity to launch into “Roar” (because lions!) and then “Dark Horse” (both off the album “PRISM,” which might explain the smoke and mirrors).

Then the whole set changed—to palm trees with faces and sharks with legs, as Katy executed her first of three costume changes. A host of mod bikini-clad women in high-top sneakers joined her for “California Gurls”; Kravitz, in his seconds-long appearance, accompanied Perry on “I Kissed A Girl” (his version of the song is a lot less transgressive than hers).

Then the mood shifted again, to make way for Missy Elliott; the rapper was joined by backup dancers mimicking Elliott’s flat-billed cap and dark clothes. Perry followed suit, throwing a huge jersey over her dress and dancing along to “Work It” and “Lose Control” in her sparkly booties. The rapper—who has been out of the public eye for years—was easily the best artist on stage, a talented lyricist and musician. But her light paled next to Perry’s, who was a ball of energy onstage. Elliott was the special guest star, but the show was Perry’s.

As indicated by the finale. As Elliott wrapped up, Perry found another dress out of seemingly nowhere (seriously, does she have body doubles?)—a silver, spangled sheath with a slit up the side. And as she launched into “Firework,” not only did she herself become a firework—as she challenges the listener to do, in the song—but the entire stadium lit up with fireworks, too. Predictable? Perhaps. But jaw-dropping, too, even through a television screen.

The Super Bowl is the championship game for a sport played entirely by men, and this year, it’s the capper to a season ridden with crime and scandal, as Aaron Hernandez stands trial for three murders and a 30-second spot on domestic violence is the NFL’s response to the Ray Rice domestic violence tape. Perry is not without her own problems, mostly in the realm of clueless cultural appropriation and having no idea what “feminism” means or indicates. But tonight, her performance was her fantasy—at times bubbly and bright, and at other times, rich and dark. It was a streak of color and light in between maudlin commercials and men forcing each other to the ground.

Undoubtedly it’s all a part of her own marketing, and the spectacle is intended to dazzle more than express anything in particular. But it felt like a much-needed break from the grinding proceedings of both disingenuous corporatism in advertisements and disingenuous corporatism on the field. It was open, it was splashy, it was feminine, it was fun. Pop music isn’t always a form of corporatism that’s any better than sports or ads. But at least every now and again, we get to hear its stars roar.