There used to be conservative economists in America. How libertarian donors and Southern voters changed everything 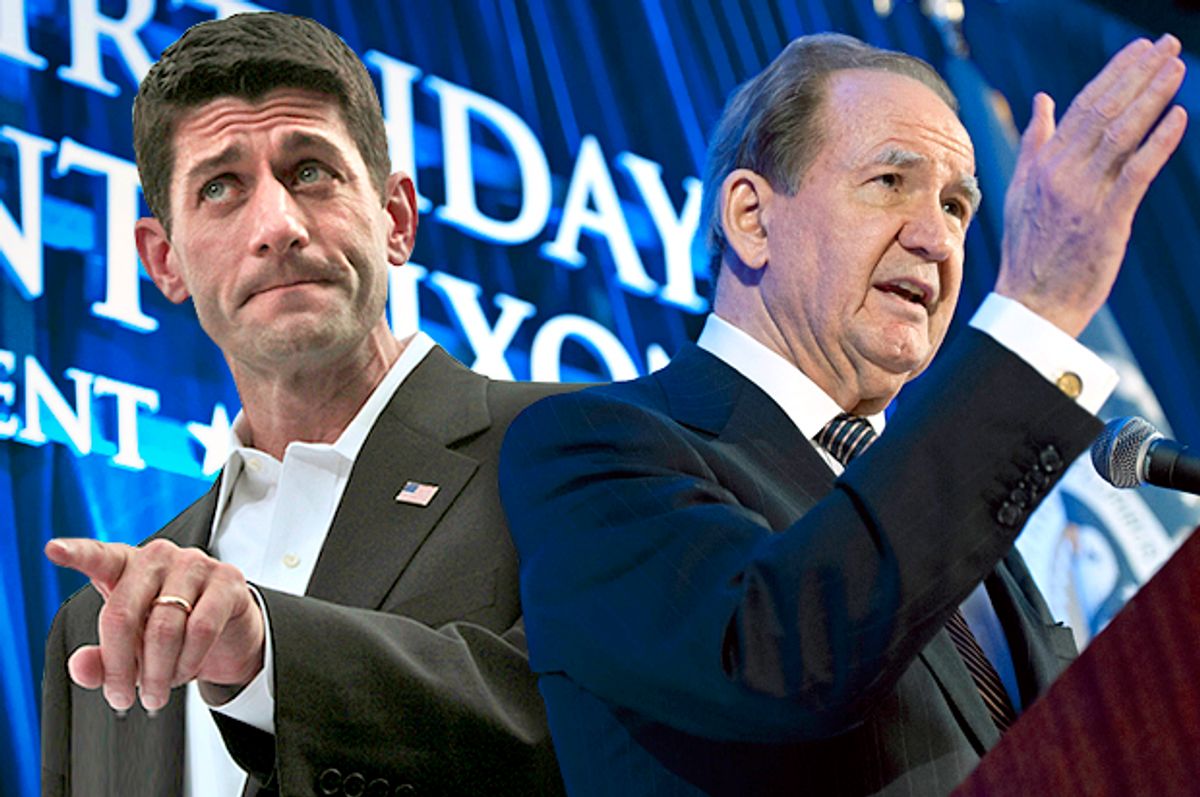 In today’s debate about the economy, populist liberals, centrist neoliberals and libertarians are represented.  One group is missing from the American economic debate:  economic conservatives.

The economists and economic pundits who are usually described as “conservatives” in the U.S. are really libertarians, or, if they are more moderate, right-neoliberals.  While genuine conservatives are anti-utopian in temperament, most right-wing economists in the U.S. share the utopian belief that many if not most public services and publicly regulated utilities can be replaced with competitive private markets.  Libertarian policy thinkers sometimes favor a minor degree of income redistribution, but only if it takes the form of means-tested vouchers for those otherwise unable to pay for goods and services in the yet-to-be-created markets, which, they believe, can replace much of the public sector.

The intellectual heroes of economic libertarianism—Milton Friedman, Ludwig von Mises, Friedrich von Hayek and, for some, Ayn Rand—did not consider themselves conservatives.  On the contrary, they all rejected conservatism and tended to describe themselves as nineteenth-century classical liberals.  In the 19th century, by the way, classical liberals like the young J.S. Mill tended to be known as “Radicals,” and called their movement “philosophical radicalism,” which underlines how un-conservative the libertarian right really is.  To compound the irony, the American Social Security system that these 19th-century radicals abominate is modeled on the public pension policy of Wilhelmine Germany’s conservative chancellor Otto von Bismarck.

How did libertarians come to dominate economic thinking on the right side of the political spectrum in America?  In other English-speaking nations and Western Europe, non-libertarian traditions contest or dominate the center-right to this day.  Britain’s Conservative Party has its “Tory wet” wing, hostile to radical free-marketeers.  French Gaullists are not libertarians.  Neither are Christian Democrats in Germany, where libertarians tend to cluster in the relatively unsuccessful Free Democrat party.  Japan?  Forget it.

Elsewhere in the world, conservatives are perfectly willing to regulate or sometimes socialize industries or rig markets in the pursuit of social objectives.  Conservative social objectives, however, are different from those of the center-left.  What distinguishes most conservative parties and movements in the advanced capitalist world is their greater degree of nationalism and familism, compared to center-left supra-nationalism and individualism.  Nationalism has often led conservatives in Britain, France and Germany to support protectionism or the nationalization of strategic industries.  And conservative familism leads, in countries like Germany, to a preference for stay-at-home mothers, as opposed to the working mothers in Sweden and France whose careers are enabled by state-provided day-care.

Thus the puzzle: Why is there no conservative economics tradition in America today?

The mystery deepens, when it is recalled that few of the post-1945 thinkers who influenced William F. Buckley’s National Review, the flagship magazine of the Goldwater-Reagan movement, thought much of the free market as an end in itself.  The once-influential conservative historian Russell Kirk dismissed libertarians as “chirping sectaries” and declared that any genuine conservative would sooner be a socialist than a libertarian.  From Kirk’s Burkean conservative perspective, libertarians or classical liberals were crazed, hyper-rationalist, utopian radicals, like Marxists.

Coming from a quite different perspective, the ex-Trotskyist and theorist of Realpolitik James Burnam thought that free-marketeers were nostalgic for a kind of bourgeois capitalism that was anachronistic in the era of managerial capitalism.  The postwar conservative thinkers Robert Nisbet and Peter Viereck shared this contempt for gung-ho advocates of the market against the state.  Buckley himself read Ayn Rand and her followers out of the conservative movement, along with the conspiracy theorists of the John Birch Society.

As recently as the 1980s and 1990s, free-market libertarians had to share the intellectual space to the right of center with neoconservatives and so-called paleoconservatives. The neoconservatives (I was one at the time) were mostly “paleoliberals” -- New Deal Democrats or sometimes democratic socialists who endorsed the New Deal, the Great Society and desegregation but objected to New Left radicalism and supported a hard line against the Soviet Union.  I can attest that most of the first generation of neocons considered the libertarian projects of privatizing Social Security and abolishing Medicare to be not only kooky but also politically counterproductive, given the popularity of these programs.

It is only in the last decade and a half that the libertarians have prevailed, completely erasing the divide between the conservative and libertarian movements in economic policy (if not foreign policy and social policy).  The “reformicons” around Yuval Levin’s National Affairs, entranced by the panaceas of privatization and vouchers, have more in common with the libertarians of the 1970s Cato Institute than with the older generation of neocons grouped around the defunct quarterly the Public Interest.

What happened in the last generation to kill off all versions of right-of-center economics in the U.S. other than libertarian free-market utopianism?  I think there were two big factors: libertarian donors and Southern voters.

The fact that the Koch brothers have funded both the libertarian think tank the Cato Institute and the conservative think tank the Heritage Foundation may go a long way toward explaining why mainstream conservative economic thinking has become indistinguishable from libertarian voucher-worship, privatization and deregulation.  According to news reports, the Koch brothers are libertarians, not social conservatives, when it comes to social issues.  In this respect, they are probably typical of most rich Republicans (and many rich Democrats), who think their own taxes are too high and believe that entitlements are too generous to the middle class but also support birth control, gay rights and higher immigration.  Libertarians have won the economic debate on the right, not because their arguments are more convincing, but because what they have to say reinforces the prejudices of rich donors.  There just isn’t much if any rich-donor or big foundation money for, say, a paleocon think tank pushing homemaker economics and a breadwinner wage, as popular as those policies might be among a large portion of the American electorate.

The other factor in the triumph on the right of libertarian economics, I think, is the transformation of the South from a Democratic bastion into the new base of the Republican Party between the civil rights revolution and today.  Southern neo-Confederates have, to put it mildly, a much greater degree of hostility to the federal government than did the Midwestern conservatives who backed Robert A. Taft or Bob Dole.

The Southern right is anything but libertarian on matters of race, gender and media censorship.  Southern conservatives support coercive government as long as it supports local domination by the Southern white Protestant tribe.  But the Southern model of economic development, based on low wages, low taxes and low public service spending, as well as the traditional support for free trade by this commodity-exporting region, creates sufficient overlap for a common alliance with the socially-tolerant libertarians of the Cato Institute and the Club for Growth and their plutocratic funders.

The monopolization of economic thought on the right by libertarians benefits the American center-left.  Of all potential opponents to the right of center that progressives might face, libertarians are the feeblest in terms of public appeal.

In other industrial democracies, the right can play the cards of economic patriotism and economic family values.  But not in America.  Today’s American right can’t combine its fervent national-security militarism with economic nationalism as a corollary, as long as “conservative” economists and pundits take the libertarian line that the offshoring of U.S. industry to foreign countries, including mercantilist nations like China that cheat, is good for everybody.

At the same time, the marginalization of the family-values paleoconservative school means that progressive proposals for family leave and day-care will not be answered by intelligent conservative proposals that emphasize homemakers and home-schoolers rather than working parents.  Instead, the American right will simply echo the claims of callous employers that universal paid family leave or public subsidies for childcare of any kind will cripple the American economy, even though similar programs have been compatible with economic success elsewhere.  Reactionaries in the business community made similar cold, utilitarian, Scrooge-like arguments against child labor bans, the minimum wage and maximum hours legislation—and eventually lost, in each case.

Instead of denouncing the Koch brothers, the Club for Growth, Paul Ryan and other free-market zealots on the right, American progressives should thank them for hijacking American conservatism and compelling it to push a libertarian agenda of privatizing Social Security, voucherizing Medicare and abolishing the minimum wage that has zero political appeal.