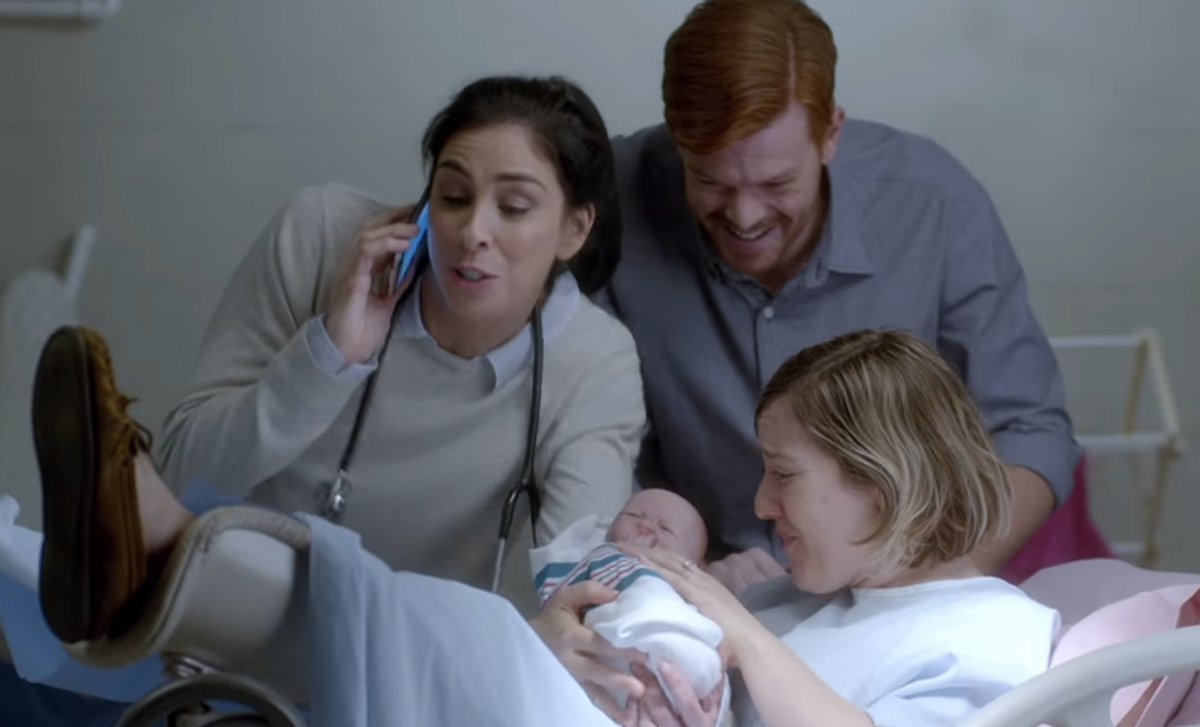 On Sunday, T-Mobile aired a Super Bowl ad starring comedians Sarah Silverman and Chelsea Handler, in which the two stars compete over who has better cell reception in increasingly ludicrous, lavish home environments -- Silverman calls from a hydroponic kale garden, Handler responds from a subterranean petting zoo, et cetera, et cetera. At one point, while Silverman holds the phone to her ear in her "underground delivery room," she hands a newborn to a woman next to her and says, in a not-quite-throwaway deadpan, "Sorry, it's a boy." And, pretty much immediately, the outraged dudebros of Twitter responded with cries of misandry and sexism.

"Sorry it's a boy" this is why men punch you in the face in movies, @SarahKSilverman #SuperBowI

@TheHollywoodHog @Weiss_Tea Sorry its a boy has no facts behind it. It's just blatant misandry. — olympic wrestling (@blastdoubleleg) February 2, 2015

With their comment "Sorry, its a boy" (when handing over a newborn) @TMobile loses #AdBowl with the most shameful, misandric comment.

And so on and so forth. While interpretations of the ad as misandrist and unfunny have neither been the only nor most dominant responses, they highlight a pretty common misconception of how sexism tends to work -- one common enough that we've talked about it in its different and very grave iterations before on this website.

It's a poor justification to say that Silverman's joke is acceptable because it's "just a joke"; that's the line all too commonly invoked when it comes to actual #EverydaySexism. But the difference is in the actual reality of everyday sexism: from treating threats to release women's private information as a "hoax" to actually releasing women's private photos, to telling women to smile on the street but never calling it harassment, to banning women's bodies on social media all the way to paying them less for the same work.

It can be a joke to react directly against institutionalized oppression and misogyny, the reality of which is ever harder to ignore, but it's not a joke to reinforce that system with harmful messages about the inferiority of women and girls -- messages such as "you throw like a girl," which was debunked in the Super Bowl ad for Always, or any of the tropes illustrated in the "Inspire Her Mind" commercial from one of T-Mobile's competitors, Verizon.

There is, as my colleague Mary Elizabeth Williams pointed out this morning, a point to be made for not "putting down either gender for the sake of a punchline" -- but "in a world in which a woman can be called, on international television, 'brilliant' for birthing a boy child, let’s just say maybe we can understand where the joke was coming from." And in a world where a tangential joke at the expense of men yields online outrage that overlooks the realities of systemic sexism, it's pretty easy to see why Silverman would have seen a need to tell it.