Citing the falling price of oil, the agency challenged the State Department's assessment of the pipeline's impact 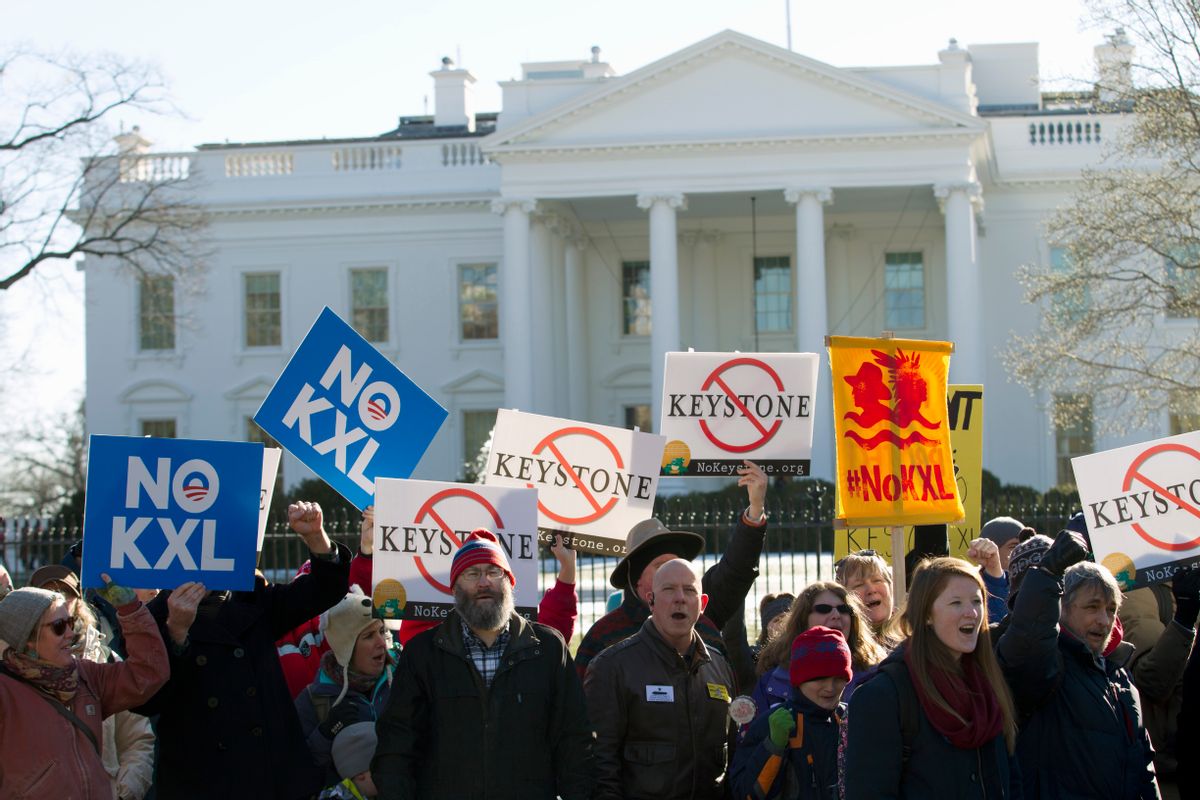 FILE - In this Jan. 10, 2015 file photo, demonstrators stand in front of the White House in Washington, during a rally in support of President Barack Obama's pledge to veto any legislation approving the Keystone XL pipeline. Supporters of the Keystone XL pipeline say the privately-funded, $8 billion project is a critically needed piece of infrastructure that will create thousands of jobs and make the U.S. dependent on oil from friends, rather than foes. Critics claim it will be disastrous for the pollution blamed for global warming and put communities along its 1,179-mile route at risk for an environmentally-damaging spill, all for oil and products that will be exported anyway. (AP Photo/Jose Luis Magana, File) (AP)
--

The Keystone XL pipeline would lead to a "significant increase in greenhouse gas emissions,” the EPA said in comments released Tuesday. The comments challenge the State Department's finding that the project would have "little impact on climate change," and they just might be what President Obama needs to finally reject the pipeline.

In a letter to the State Department, the EPA challenged the assertion, made in the State's environmental impact assessment, that Alberta's tar sands oil will be developed with or without the Keystone pipeline. Companies, it maintained, would simply transport the oil by rail instead -- a more expensive, but still cost-effective option.

But the falling price of oil, the EPA said, is reason to revisit those conclusions: last week, it notes, oil was trading at under $50 per barrel, and the State Department's analysis found that if prices were sustained between $65 and $75 per barrel, construction of the pipeline would be the only way to make tar sands development profitable. "In other words," the agency wrote, "the Final SEIS [Supplemental Environmental Impact Statement] found that at sustained oil prices within this range, construction of the pipeline is projected to change the economics of oil sands development and result in increased oil sands production, and the accompanying greenhouse gas emissions, over what would otherwise occur."

Pipeline opponents are jumping on the EPA's words and comparing them to those of Obama, who has repeatedly said that he will approve the pipeline only if it's found to be in the national interest -- meaning, in his interpretation, that it "does not significantly exacerbate the problem of carbon pollution."

"The Environmental Protection Agency has just affirmed what has been clear all along: the Keystone XL tar sands pipeline fails the president’s climate test," said Sierra Club director Michael Brune in a statement. "These comments re-confirm that this dirty and dangerous project would significantly increase carbon pollution. That's the standard the president has set for rejecting Keystone XL, so we fully expect him to do just that."

The State Department also asked the Pentagon and the Departments of Energy, Justice, Interior, Commerce, Transportation and Homeland Security to weigh in on its national interest determination before Secretary of State John Kerry makes his final recommendation to the President; their comments were due on February 2.