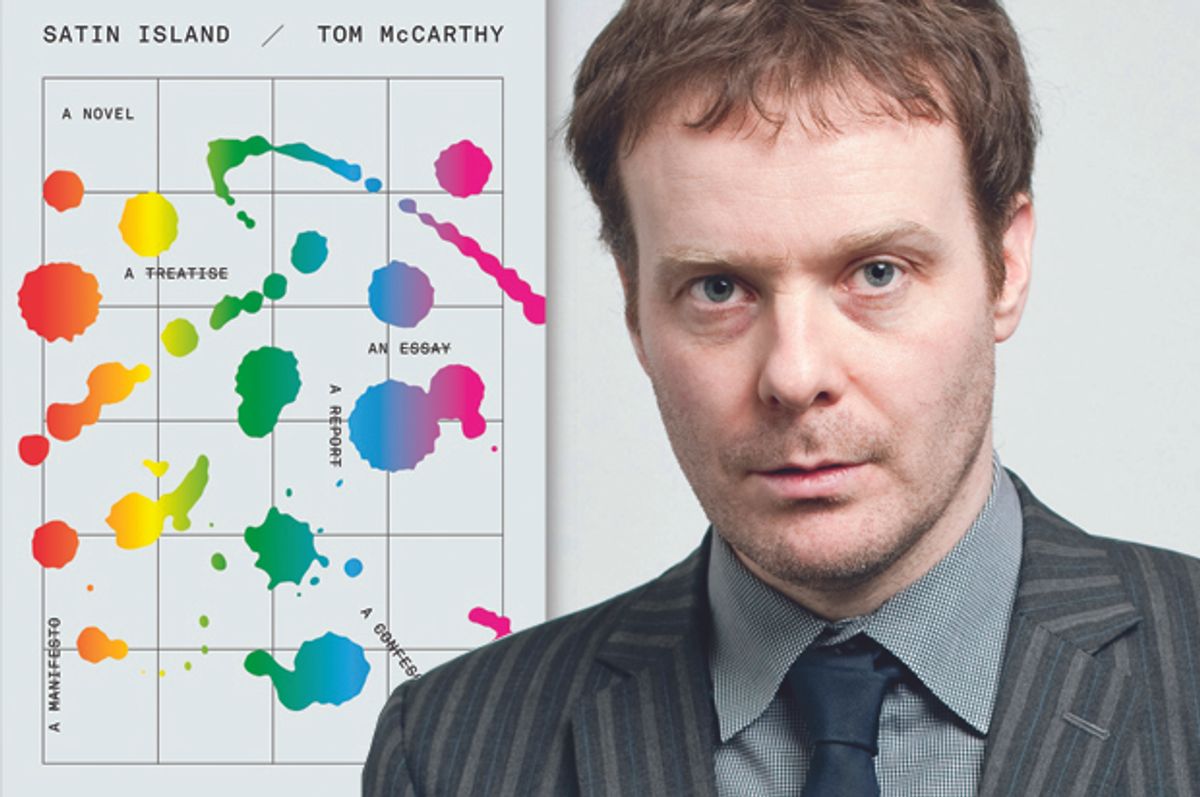 Tom McCarthy’s new novel, “Satin Island,” follows a “corporate anthropologist” who, while compiling a sprawling ethnographic document known as the Great Report, becomes enamored with the story of a fatal parachuting accident. And as we might expect from the general secretary of the "semi-fictitious" International Necronautical Society, McCarthy's book release isn't heralded by a standard book trailer. McCarthy collaborated with Belgian filmmaker and multimedia artist Johan Grimonprez on a haunting moving collage of disaster and beauty, set to a shimmering, down-tempo instrumental track by the post-rock group Lights Out Asia.

McCarthy is the acclaimed author of the novels “Remainder,” “C,” which was short-listed for the Man Booker Prize, and “Men in Space,” as well as the book-length essay “Tintin and the Secret of Literature.” Early reviews suggest his latest will continue to push the boundaries of narrative and reader expectations—Publishers Weekly calls “Satin Island” as “delightfully unclassifiable as his last” and Kirkus hails it as a “dizzying take on possible conspiracies, corporate philosophies and one man’s idle thoughts.”

Here's your first look at the new short film:

McCarthy describes to Salon the process behind his collaboration with Grimonprez and how the film echoes some of the themes in his new novel:

McCarthy: I didn’t want to make a “trailer” for my novel. Instead, I invited Johan Grimonprez, an artist whose groundbreaking work in the collage/found-footage field I’ve admired for over a decade and with whom I once had the pleasure of working (on “Double Take”), to set a short passage of it to film. So we sat for two days in his studio in Brussels, scrolling through his image archive on two screens while, on a third, the Charlie Hebdo hostage situation in Paris played itself out live.

"Satin Island’s" narrator, a “corporate anthropologist” who tries to decode our culture, squinting at the world through an ever-more-pixelated veil, becomes fascinated with a news-item about a parachutist who died when his equipment malfunctioned. Fascinated as he is by networks — of kinship, myth, language and technology — the narrator sees in the parachutist’s situation a sudden and catastrophic voiding of any and all the webs that hold and cradle us the whole time.

This mirrors his obsession with buffering — when everything freezes and that little circle spins on your screen. I make a play in the book between the parachutist’s buffeting by wind and digital buffering. The narrative with the latter is: Don’t worry, there are hordes of bits and bytes and megabytes all beavering away to get the requisite data to you so that it can then be rendered, like so many angels dancing on the pin-head of your connection. But (the narrator starts to wonder) what if it were just a circle, spinning on your screen, and nothing else? What if there were no connection?

It’s ultimately a theological situation — in the same way that Nietzsche’s madman’s provocation in the marketplace (in “The Gay Science”) is a theological cry. The madman’s not an atheist — the market traders are; but he confronts them with the horror and the vertigo of universal emptiness: “Are we not hurtling further away from the sun, from all suns? Can’t you feel the cold?” and so forth.

The parachutist — and narrator, and perhaps all of us — are in a similar situation. If there’s a contemporary “condition,” this is perfectly captured by the phenomenon of buffering. Or buffeting. The end-limit, the event-horizon, of both situations is a crash.

"Satin Island" will be available Feb. 17.