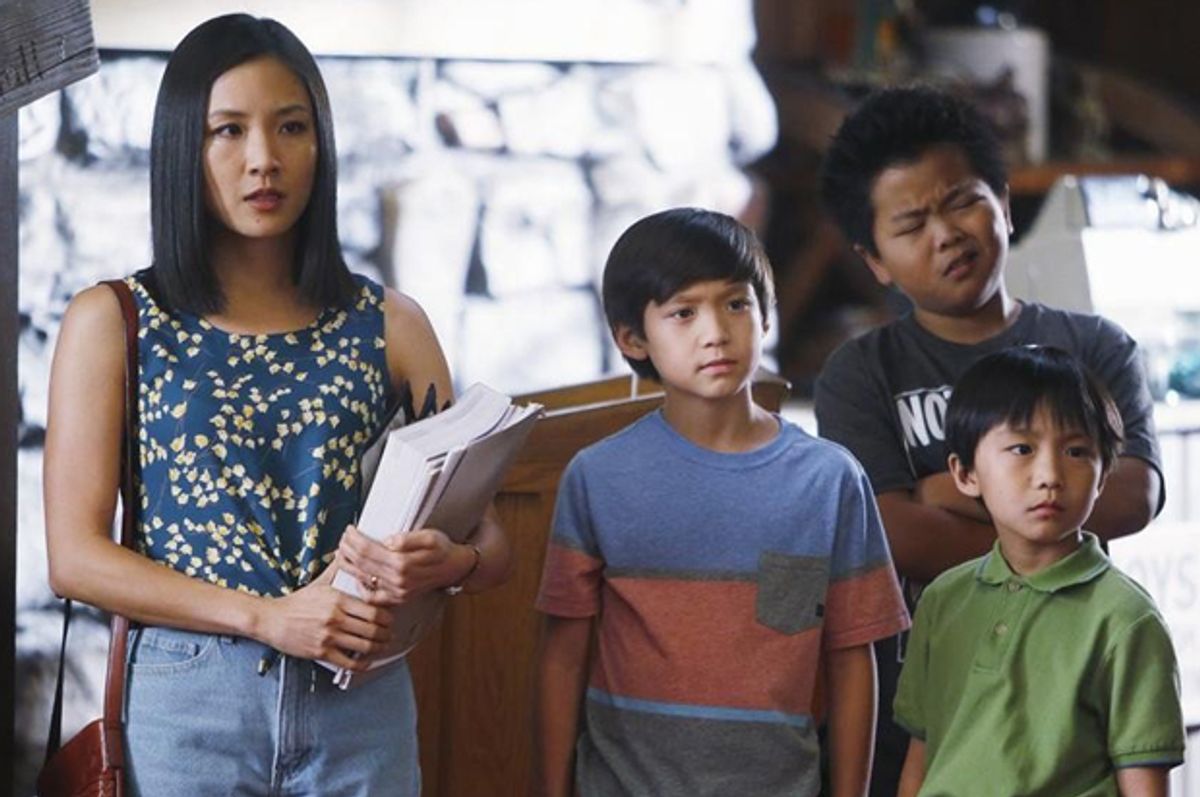 “Fresh off the Boat” is going to be more polarizing than beloved. It’s a debuting sitcom with sharp edges—hardened more than heartfelt—based on the memoirs of celebrity chef Eddie Huang, an outsize personality who named all of the menu items in his now-closed New York City restaurant Xiao Ye after vicious Asian stereotypes (“Everything but the Dog Meat Plate,” for example). It’s not just a narrative of the immigrant experience, it’s a confrontation with it—it sometimes feels like the show is smushing your face into the immigrant experience instead of merely telling a story about it. The stories of “Fresh off the Boat” could not happen to ­any family, regardless of race; they have to have happened to this particular family, in this particular time, in this particular place. The Taiwanese Huang family, in the pilot episode, moves to Orlando, Florida, from Washington, D.C.—from a well-established cultural community and close family ties to humid, muggy, white-bread suburbia, so that patriarch Louis can run a western-themed restaurant named Cattleman’s Ranch. Eddie Huang, future chef, is just 11 years old; the year is 1995.

I happened to grow up an Asian immigrant in a white exurb in Florida, about an hour’s drive from Orlando; my upbringing is eerily similar to the one depicted in “Fresh off the Boat.” Meaning I dropped right into the family’s storytelling, led by adolescent Eddie (Hudson Yang), a kid who prefers the company of rappers Notorious B.I.G. and Old Dirty Bastard to that of his family, and his mother, Jessica (Constance Wu), a Stephen King fan, who never backed down from asserting herself and is not about to start now. Yang’s Eddie is the technical protagonist of the show, and much of the show’s sensibility fits into his fantasies (in the second episode, he has a vision of starring in his own rap video). But Constance Wu’s Jessica, intentionally or otherwise, steals the show right out from under him. The American-born, American-raised, classically trained Wu delivers a Chinese accent, hatchet-faced scoldings and even stiff-backed, uptight posture—while embodying a character that is much more textured than a mere stereotype. (Wu told the New York Times Magazine that in her performance she actually “underplays” the real-life Jessica Huang—who, like her son, is apparently another outsize personality).

And if it seems like I’m unfairly focusing on Eddie and Jessica, who are just two of the family’s six members (there’s dad, grandma and Emery and Evan, the two younger brothers; Emery is a budding ladies' man, and Evan is a gossip who likes to play by the rules), it’s because at least in the first few episodes, it’s the stories of this particular mother and this particular son that deliver much of the tragicomedy of “Fresh off the Boat.” The show—especially by the third episode, “The Shunning”—manages to take a single story and turn it into something uniquely transformative for numerous characters; this is especially true for Eddie and Jessica, who as stay-at-home mom and eldest-immigrant son are, despite their fighting, very close to each other. It’s Jessica who takes Eddie to the white-people grocery store when he wants Lunchables to take to school instead of her “weird” food; it’s Eddie who acts out most when Jessica insists the boys do after-school tutelage, under her supervision.

Because the subject material feels close to home, I’m both predisposed to identify with it and to not quite see it as a comedy: The Huang family’s rocky transition is painfully familiar. The story lurking underneath Eddie’s adolescent anxieties about fitting in, making friends and finding a way to belong is the precarious struggle his parents are attempting, trying to find a foothold in the United States. In a way, they are struggling to find the same things Eddie is in school—but where middle school is down the block, they traveled half a world.

Not that “Fresh off the Boat” is satisfied with being maudlin. The Huangs don’t want anyone’s pity, least of all, their own—one of the truly brilliant subplots of “The Shunning” is that Jessica is forced to realize that her manic self-sufficiency has made her blind to gestures of real kindness from those around her. The humor comes both at the Huangs’ expense and at the expense of the hypocrisies of the world around them—carrying with it the sharpness and snark that characterizes Huang’s writing. “Who knew Asians were into karaoke?” asks a neighbor who doesn’t get a chance to get to the mic, because Jessica is hogging it. “This isn’t a duet,” Jessica huffily says to a friend who tries to join her.

“Fresh off the Boat” is at the tail end of ABC’s huge push for diverse stories in the 2014-2015 television season—a push that has included “Black-ish,” “How to Get Away With Murder” and “Cristela,” all of which debuted in the fall. With “Fresh off the Boat,” ABC becomes a network to have three separate sitcoms about three different minority families run by showrunners of color—no small feat, considering that NBC, Fox and CBS cannot even muster up one. (The only network that comes close is Fox, where “Family Guy” and “American Dad” creator Seth MacFarlane is bringing another animated comedy named “Bordertown” for later this year. “Bordertown” will follow the stories of both a white family and a Latino family. MacFarlane is not Latino, and based on his track record with offensive humor, it’s unlikely “Bordertown” will be any different.)

But where Latinos and African-Americans have had successful television shows before this year, there’s no such precedent for Asian-Americans. Margaret Cho’s “All-American Girl” is the closest “Fresh off the Boat” has to a legacy, and that show was repudiated by the Korean-American community it sought to portray and was then canceled after just one season. As Wesley Yang writes in that same Times Magazine article, making a show about a niche population is not an easy task. “Comedies about nonwhite people generally must navigate a trap-laden path between offending the group represented and neutering the comedy to avoid doing so.”

“Fresh off the Boat” manages to address this by being as specific as possible—it does, as Yang observes, have the “real” backing of Huang’s memoirs to justify the characters’ idiosyncrasies. And it does the hard work of fleshing out each individual character—even Emery and Evan, who are in single digits; even Mitch (Paul Scheer) and Nancy (Jillian Aremnante), the hapless employees at Cattleman’s Ranch. As a result, so far, the humor doesn’t feel like it’s taking unfair potshots at anyone. It’s sharp, yes—but not nearly as sharp as Huang himself, who called the show’s producer Melvin Mar, of Asian descent himself, a “house Chinaman,” implying (I think) that Mar was the type of immigrant that would suck up to the white executives in charge. Mar and showrunner Nahnatchka Khan were the creative that molded Huang’s tone into the show debuting on ABC tomorrow.

Even that muted irreverence has ruffled some feathers. In the New York Post’s review, for example, Robert Rorke concludes, “The show’s view of Caucasians is certainly not going to entice anyone to stick around for Episode 2.” I don’t agree, at all—“Fresh off the Boat” shows a facility for mingling tragedy and comedy that is plenty enticing—but it’s worth pointing out that Rorke’s notion of “anyone” is almost definitely those selfsame “Caucasians,” which is to say, white people. The idea that most or all people are white people is the exact idea that “Fresh off the Boat” is pushing against.