A plurality of likely Iowa GOP caucus-goers agree: Beyonce's music is "mental poison." It's gonna be a long year... 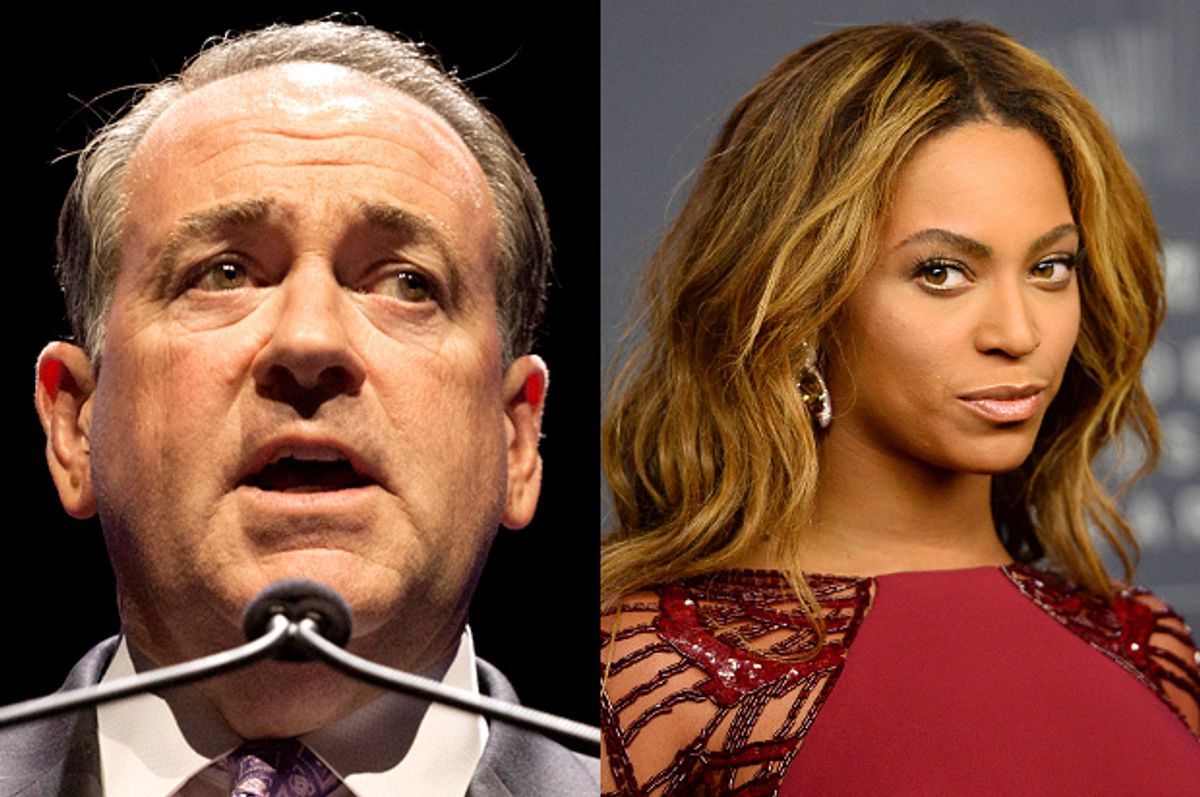 At long last, a news organization with money to throw around has gone ahead and polled Mike Huckabee's crusade against Beyonce among likely Iowa caucus-goers. The results are mixed. And "mixed" is a problem.

Beyonce is a cultural icon who sings hit songs and dances and a lot of people love her. But not all people love her, and those are the people to whom Mike Huckabee, in a seemingly bizarre move, is targeting his nascent pre-presidential campaign. He goes on about Beyonce in his new book, [Vomit Noises]. While he allegedly respects her talent, he describes her song lyrics as "obnoxious and toxic mental poison." He criticizes Jay-Z as a "pimp" by allowing her to dance all sexy-like at the Grammys. And he doesn't understand why the Obamas would let their daughters listen to such evil music.

Bloomberg Politics and the Des Moines Register asked likely Iowa Republican and Democratic caucus-goers what they thought of two of Huckabee's comments: that the Obamas were bad parents for letting their daughters listen to Beyonce, and that Beyonce's music is "mental poison."

Iowa Democrats, by extraordinary majorities, thought Huckabee "went too far" in each case.

Iowa Republicans, meanwhile, reflected a more interesting range of views -- the inverse of how we would've predicted it, really. A 62% majority said that Huckabee "went too far" in his criticism of the Obamas' parenting. Not bad, considering Republicans tend to go out of their way to criticize the Obamas over any and everything.

As for Beyonce's music being "mental poison," though? A slight plurality of likely Iowa Republican caucus-goers, 40%, suggested that Huckabee was "mostly right," compared to 38% percent who thought he "went too far." Huh.

We had wondered, and there it is: Laying the groundwork for a presidential campaign by going out of your way to trash the pretty non-controversial Beyonce is far from a deal-killer in the Iowa Republican caucuses. In fact, it might even be fruitful. This is the state where televangelist Pat Robertson finished ahead of eventual victor George H. W. Bush in the 1988 Republican nominating cycle, railing against big-city culture. A lot of the Iowans who caucused for Robertson back then are still around today, and they're older, and they might just cotton to a candidate who goes around complaining about the smutty devil-women who keep showing up on their television boxes. On Sunday evening, of all times. Good Heavens.

So. What should the people who do have a shot at winning the Republican presidential nomination take from this? Does this suggest that getting sucked into the Iowa sinkhole is a wise strategic investment of resources? Here's your big competition, Chris Christie, Jeb Bush, Scott Walker, maybe someone else: The recently departed Fox News host who goes around trashing Beyonce's music as "mental poison." Here's your pool of likely caucus-goers, fellas: people who are more likely than not to agree with Mike Huckabee about that. Is this a state to which you want to devote million of dollars to organizing and media buys, not to mention dozens of in-person visits?

Iowa is a wonderful place but Iowa conservative politics are weird and don't really matter in terms of selecting the eventual nominee. But we have no doubt that everyone will try to go for the mythical "early Iowa knockout" anyway, because it's The Way It's Always Been Done and because political consultants enjoy visiting certain bars and restaurants every few years.