Rand Paul needs to be shushed: Why the confrontational brat is not ready for prime time

Rambling about the dangers of vaccines, erupting at a female CNBC anchor: the 2016 hopeful needs some help 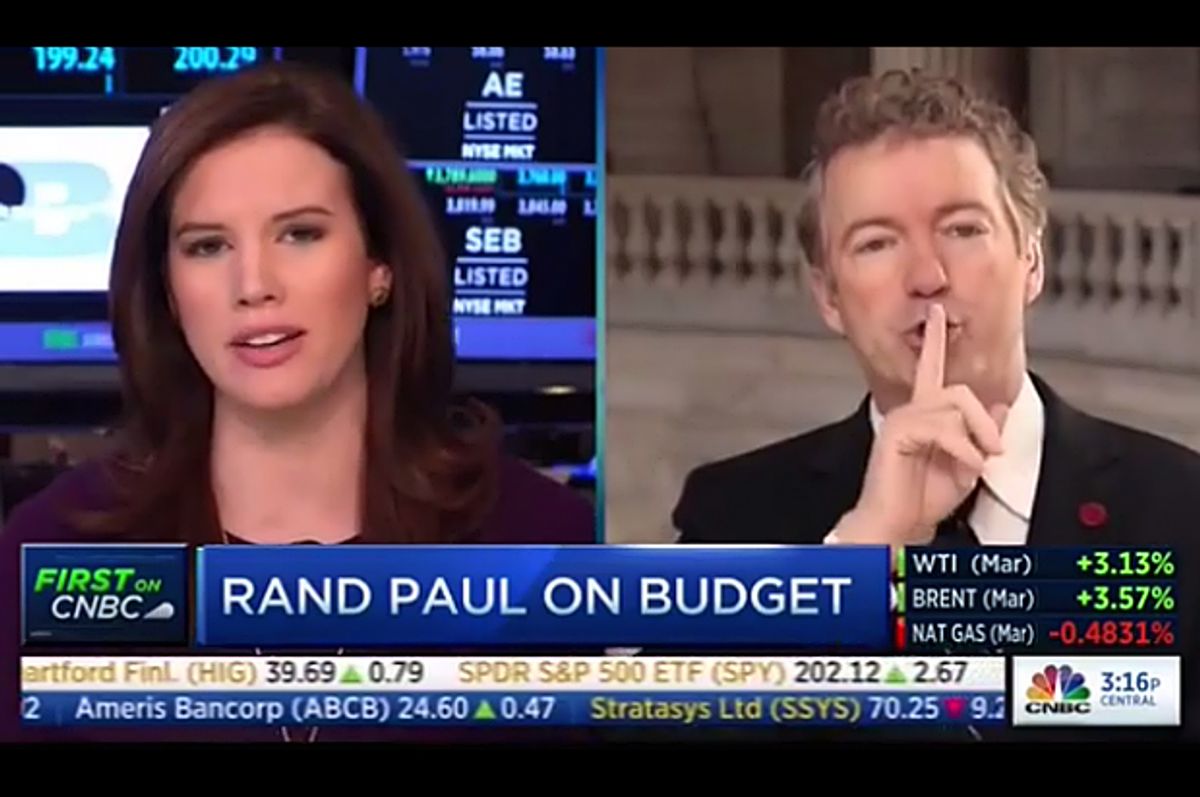 I’ve written before about the downside, for Sen. Rand Paul, of growing up Randy Paul, the pampered scion of the Ron Paul family, whose every thought was apparently entertained and encouraged. Paul wanders the world confident that he’s having original, important ideas, whether he’s whitesplaining the founding of the NAACP to Howard University students or, on Monday, sharing his half-baked theories about the side effects of childhood vaccination while shushing CNBC anchor Kelly Evans.

I’m not quite sure which is worse: that Paul, a doctor, spouted evidence-free paranoia about vaccines, or that a leading candidate for the 2016 GOP nomination is so unused to a political challenge that he snapped at a cable television host in a particularly sexist way.

Let’s take the first issue. It’s true that Kelly Evans challenged Paul for telling Laura Ingraham earlier in the day that “most vaccines should be voluntary.” He shot back:

I don't think there is anything extraordinary about resorting to freedom….I have heard of many tragic cases of walking, talking normal children who wound up with profound mental disorders after vaccines. I'm not arguing vaccines are a bad idea. I think they are a good thing, but I think the parent should have some input. The state doesn't own your children. Parents own the children. And it is an issue of freedom and public health.

“Parents own the children” is kind of creepy and paternalistic, a staple of right-wing thinking, but the claim that “walking, talking normal children” can wind up “with profound mental disorders after vaccines” is eccentric and dangerous – especially coming from a doctor.

Paul contended that the problem is giving newborns “five and six vaccines all at one time.” Turns out he was channeling his father there. Rep. Ron Paul apparently spouted similar nonsense science about vaccines. "I think the doctors have gotten to the point where they give too many, too often," Paul Sr. said in 2007. "They bunch 'em together—four, five of these vaccines together—and they overwhelm the immune system."

There is absolutely no evidence for such a claim, but the Doctors Paul think they know best. With his vaccine comments Rand Paul secured himself a place on the fringe, even of the GOP, though he obviously has company there.

Then there’s the way he tried to shut down Evans. The host of “Closing Bell” was direct, even confrontational at times – but that’s her job. She was asking him not only about his vaccine views, but about a fascinating Washington Post report on the opthalmology "board" he established to end-run the official board certification process, which he contended favored older doctors. Paul wrote and gave the exam (and took it himself), put only his wife and father-in-law on the board, listed his address in the wrong state, and in the end, saw some doctors who earned his certificate lose their hospital practice rights and ultimately have to seek the established board's certification.

Paul not only bristled unprofessionally at Evans's questioning, he also ventured into the caveman realm, literally shushing the news anchor, with a finger to his lips. "Let me finish. Hey, Kelly, shhh. Calm down a bit here, Kelly. Let me answer the question."

Evans appeared perfectly calm. It reminded me of the time I was debating then-future Ohio Gov. John Kasich on “Hardball,” and when I unsettled him, he told me I should learn to control myself. To some men, apparently, an assertive woman is out of control and needs to calm down --  especially if she’s succeeded in upsetting his calm.

At another point he chided Evans: “Once again, you are mischaracterizing and confusing the whole situation," adding, "You have taken an interview and you've made an interview into something where we got no useful information because you were argumentative and you started out with so many presuppositions that were incorrect." Paul closed by advising the female host that “frankly, I think if we do this again, you need to start out with a little more objectivity going into the interview." I’m sure Evans is grateful for the career advice.

Maybe Paul’s advisors think disrespecting a female journalist wins him points in a GOP primary, but it’s the sort of thing that will hurt him in the general election, especially if he’s facing Hillary Clinton. Paul has demonstrated a tin ear on gender before, suggesting that the infidelity of Clinton’s husband was fair game politically if she ran for president and insisting that “if there was a war on women, I think they won” – both in the same “Meet the Press” interview last year.

But it’s not just Paul’s potential gender issues that make the encounter with Evans troublesome politically. It’s that he came off as pampered and thin-skinned and unready for the rough and tumble of a presidential campaign.