She's got that red lip classic thing that you like, but "Agent Carter" needs more substance with her style 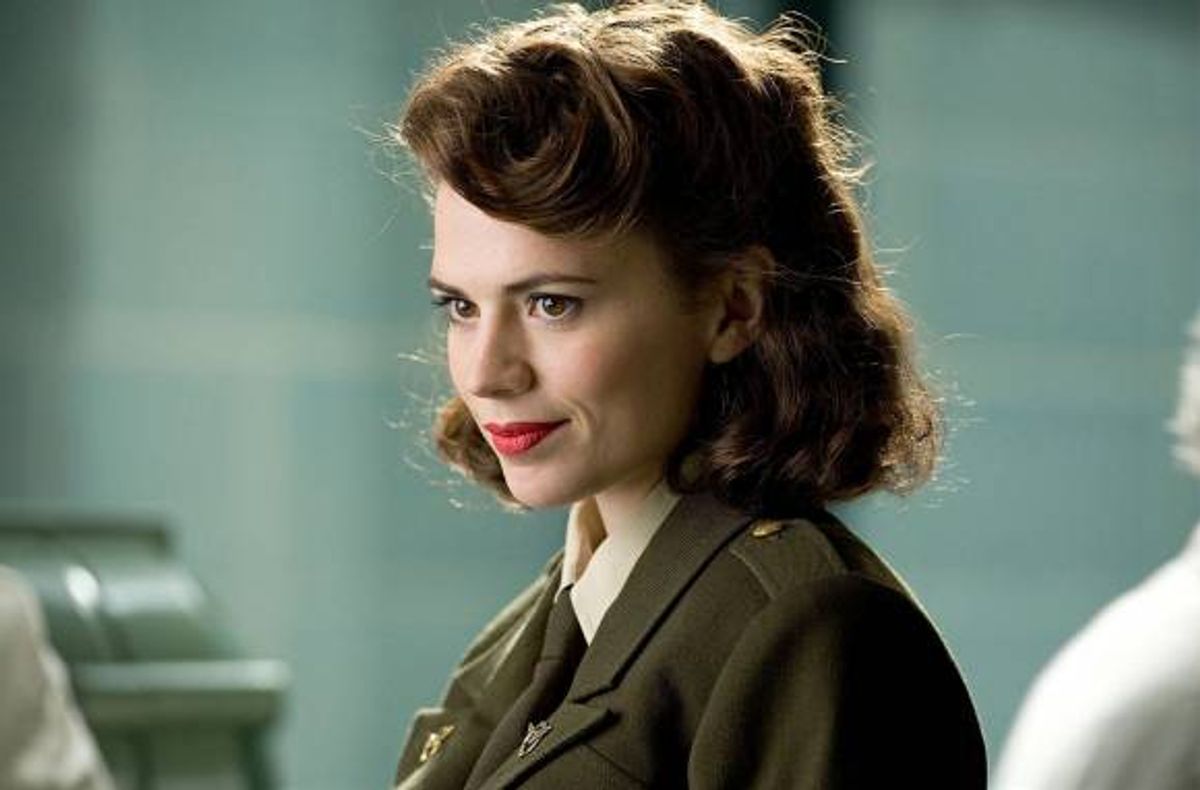 The first thing I learned about “Marvel’s Agent Carter,” next to the news of its existence, was the shade of lipstick worn by Hayley Atwell on the show. Atwell herself tweeted it in December, a month before the show premiered. It’s a shade of red called “Red Velvet,” made by Bésame Cosmetics, which specializes in creating makeup with a sense of history—modern reproductions of makeup from the ‘20s to the ‘50s. It fits a business niche in Hollywood, and it satisfies the desires of individuals looking to re-create classic glamour.

There is also just something about red lipstick—its blood-red vitality and its eye-catching pop. It’s the lip color, the perennial shade that has graced the lips of Cleopatra, Elizabeth I, Marilyn Monroe and Madonna. In New York magazine, Glynnis MacNicol wrote about how growing up, for her, meant learning how to wear red lipstick: “They don’t call it fire-engine red for nothing. It was impossible to miss. All I had to learn now was how to be someone who didn’t want to be missed,” she writes. “That nonnegotiable mark of color has become a small daily reward to myself, a final perfect piece in the daily puzzle of putting myself together to meet the faces that we meet, an armor against the world. Here I am, I say to myself, red X marks the spot. But also: Stand back. Make way.”

“Marvel’s Agent Carter” is not a good show, yet. Mostly because it is, as my colleague Laura Miller put it, a “mood piece” more than a story-driven drama. As a longtime fan of ABC’s “Alias,” it’s amusing to me how much this new ABC show borrows from its older sister. The female agent with a dead love interest and nothing to lose. A double-agent lifestyle that, she fears, puts her loved ones in harm’s way. Voice-over narration in lieu of opening credits, complete with an elevator scene and a vaguely titled secret agency, beginning with the letter “S.” And spy missions that leverage women’s perceived weaknesses to be women’s inherent strengths.

One of those? Lipstick. A tool for enhancing sex appeal, but a tool of power, too. In the pilot of “Agent Carter,” Peggy not only sports fantastic red lipstick, she also uses it to drug a guy—a trick pulled by “Firefly” and a later season of “Alias,” as well. In the pilot of “Alias,” Sydney uses lipstick to distract the woman checking her (borrowed, fake) passport. “I love that color on you. It really pops. What do you think about this one? I think it’s too light for me.” The lipstick is a ubiquitous distraction, easily explained, easily wiped off. Sydney’s “too light” lipstick is a pretty nude in that scene, not red. But lest we forget about the color red, her hair, in that scene, is a Ronald McDonald orangey-red—2001’s answer to the lady spy’s red pout, perhaps. And this is your friendly reminder that (presumably female) KGB agents carried pistols disguised as tubes of red lipstick—rolling sex appeal and death together in the neatest possible package.

According to “Girl Culture: An Encyclopedia,” lipstick is supposed to mimic what the state of sexual arousal does to lips, as well as draw attention to their eroticism. There are a few possibly apocryphal theories as to why red lipstick, specifically, is the most intriguing, both in terms of sex appeal and symbolism. Red is the color of blood, after all, and a scarlet lip brings to mind women biting their lips to make them pinker before entering a ballroom or receiving a suitor. It’s a color with a simultaneously violent and sexual connotation—possibly because women’s sexuality is so often mingled with violence, whether that’s through the persistence of rape culture or the often bloody, painful rite of passage to womanhood, through menstruation, childbirth, or just having intercourse for the first time. A bright red was the first color available for a long time; not until the early ‘60s did pinks, nudes and even whites become available and fashionable.

There’s a lot here, in terms of complexity and significance. So, naturally, this is a great moment to introduce Taylor Swift, who is one of the most skilled manufacturers of pop-culture image in the business. Of every red-lipstick-wearing starlet out there, Swift is one of the most vocal about it—she’s not just wearing red lipstick, she’s branding it. In at least three songs on her latest album, “1989,” Swift sings specifically about her signature lip color. In “Style,” it’s: “I’ve got that red lip / classic / thing that you like.” In “Blank Space,” it’s: “Cherry lips / crystal skies / I can show you incredible things.” In “Wildest Dreams,” it’s “Red lips and rosy cheeks / say you’ll see me again / even if it’s just in your wildest dreams.” The cover for “1989” is a Polaroid that cuts off most of Swift’s face, but reveals to us her red lips; she’s wearing red lipstick in every video from the album so far. And this is all just a sequel to Taylor Swift’s fourth studio album, “Red,” where she sings, “Loving you was red… we’re burning red.”

Up until just a few years ago, Taylor Swift was a country-pop singer; the red lipstick is part of her becoming an adult (she’s spent nearly a decade as a famous musician, despite being only 25). She projected wholesomeness and wore cowboy hats as her hair flew around her in ringlets. As she’s aged, she’s grown more polished—and the red lip has come out. “Fearless,” in 2008, is all golden-girl nude lips. In 2010, Swift’s wearing a red lip on the cover of “Speak Now,” but it’s drowned out, almost, by the fuchsia gown that is swirling around her. By 2012, with “Red,” the only color on the album cover, against her straw-colored hair and pale face, is her careful red pout. In the “Shake It Off” video—the first single off of “1989,” released last year—Taylor Swift is not just wearing red lipstick, she’s wearing red lipstick and all black. Her curly long hair is straightened and cut short; the only color is on her lips.

As she sings in “Style”—she’s going for something “classic.” But what does that really mean? Stripped-down? Simple? Elegant? Perhaps. Or maybe, as Alessandra Stanley meant when she said Viola Davis was “less classically beautiful” than the lighter-skinned Kerry Washington, it means white. The thing about red lips is that they add a pop of color on an otherwise colorless face. And all the women I’ve mentioned above who made history with their red lips—whether they’re spies or rulers or pop stars—are white women (with the possible exception of Cleopatra, who was descended from Greeks, and is depicted in a variety of skin tones).

It’s hard to think of too many women of color who have made a red lip iconic, and even if they have, it connotes something different. It’s not Snow White—who famously had skin as white as snow, hair as black as night, and lips as red as a rose. Instead it’s Cookie in “Empire,” or Diana Ross. Lucy Liu. Josephine Baker. Gloria Estefan. Aishwarya Rai. And even Davis herself. It’s not a piece of history; it’s not classic. It’s still a debated question if darker-skinned women look good (“classically beautiful,” perhaps) in a red lip.

Which brings me back to “Agent Carter.” The show isn’t great yet, though it has potential. And it’s because it hasn’t quite followed through on what that red lipstick Hayley Atwell wears so well really means. New York City in 1946 was a postwar city in turmoil—returning GIs taking jobs from the women who became independent during the war; communism, a red specter on the horizon; and festering race relations. (The show has drawn some criticism for barely featuring any actors of color; it’s hard to tell if the decision is deliberate, so “Agent Carter” can tell a story about race, or if it was merely overlooked.) That lipstick is a piece of history, but it’s hard to tell if this show is going to really tell the story of that history—it’s wonderfully female-centric without knowing where to go with it.

So much of the show’s appeal and aesthetic is wrapped up in the red lip—which is both a glamorous, fun option for Peggy Carter, and also part of her uniform as a woman. The show is a meditation on being a single and capable woman in a world that offers only limited paths for women. Peggy eats her meals in an automat, lives in a near-dormitory for single women with a curfew and a no-men policy, and is treated like a secretary at work. She’s not just wearing lipstick because she wants to, as lovely as it is—and no matter what Taylor Swift might argue. She’s a woman in 1946. She has to.