The "perfect victim" myth: How attempts to discredit rape survivors stand in the way of real change 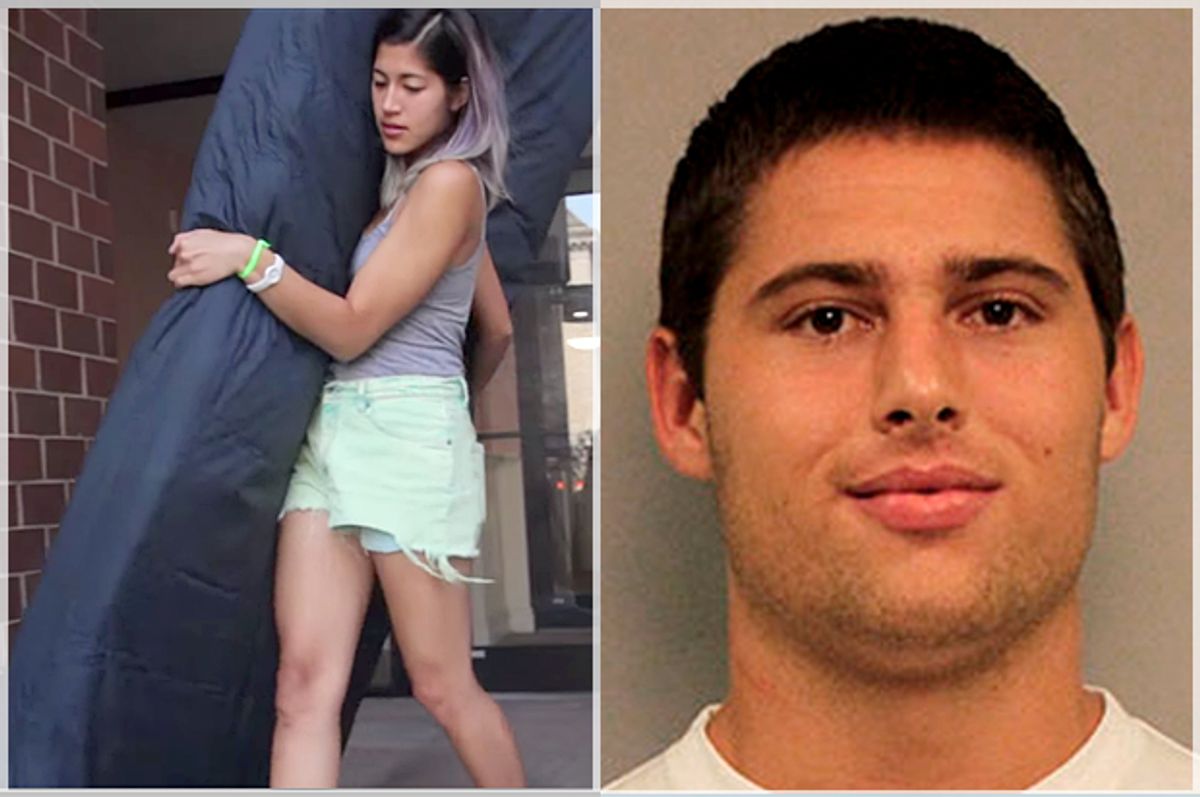 Following the lead of a December piece in the New York Times, the Daily Beast and writer Cathy Young on Tuesday profiled Paul Nungesser, the man Emma Sulkowicz says raped her and is the reason she's carrying her dorm mattress in a performance art and protest piece called "Carry That Weight." There is nothing in Young’s story that the Times didn’t already cover, and both make essentially the same case: Nungesser believes he is a nice guy who was wrongly accused of rape and is now being bullied off campus by an avenging woman and her network of powerful supporters, including New York Sen. Kirsten Gillibrand.

In the more than 5,000 word piece, Young provides transcripts of friendly Facebook exchanges Nungesser had with Sulkowicz after the alleged rape, his mother talks about raising her son in a feminist household and Young points out that Columbia University declined to discipline Nungesser after citing a lack of evidence in the case. In the end, Young concludes that Nungesser could very well be “a man who has been treated as guilty even after he has proved his innocence.”

Now if you believe that the battle to remake the institutions and cultural norms that foster rape and protect rapists will be lost or won on the unimpeachability of rape victims (for more on the limits of personal narratives in justice movements, this piece from Elizabeth Stoker Bruenig raises some interesting points), then Young's history of writing to discredit victims can feel like a major thorn in the side of the anti-rape movement. And it's important to respond to Young's piece by pointing out why victims of abuse sometimes remain with their rapists or may try to protect their abusers (and themselves) by refusing to cooperate with investigations that can be hostile and re-victimizing. How trauma and memory can make victims' stories seem unreliable. And how none of that changes the prevalence and realities of rape on campus and off.

After I read Young's piece, I thought of the recent conviction of two former Vanderbilt University football players who gang raped an unconscious woman in a school dorm. The rape was recorded on multiple cellphones, and the brutal details of the assault were reported in full by the Tennessean. But the morning after the rape occurred, having no memory of the assault, the victim had consensual sex with one of the men involved, Brandon Vandenburg. She also initially refused to cooperate with the officials investigating the case. “[Vandenburg] told me that I had gotten sick in his room and he had to clean it up and that it was horrible and that he had to spend the whole night taking care of me and it was horrible,” the woman said in court. “I apologized. I was embarrassed.”

After both men were found guilty on all counts, reporters asked a lawyer for Vandenburg how his client had reacted to the conviction. "It's very difficult for a person who is young to understand what happened, because he asked me what happened," he replied. Cory Batey, the other man convicted of rape in the case, maintained throughout the trial that what happened that night was not sexual assault but some sad consequence of binge drinking.

Both of those men have maintained their innocence despite graphic footage of the rape. And the victim had consensual sex with Vandenburg after the assault, and initially refused to cooperate with the police. But those details do not change what happened that night or the crime that was committed. Just as the complex trauma responses and personal histories that victims experience (and the rare incidence of false reports) do not change the realities of what we know about rape in this country. (It is widespread. It is underreported. We have a hard time identifying it as such.)

Looking for the "perfect victim" is an exhausting cycle, and it doesn’t get us much of anywhere. And it demands far too much of the victims who have risked so much to speak publicly about a crime that we ignore and excuse over and over again.

Because Sulkowicz is a powerful advocate, but she is one woman in a movement to remake a system that routinely fails to keep people safe or offer any measure of accountability. No matter how nice or good or whatever moving target of characteristics we demand victims inhabit to be believable, personal narratives will always have limits when so many of our reflexive assumptions about rape are punishing of victims and protecting of rapists.

We scrutinize victims in an endless quest for “proof” of the ways that sexual violence takes your body from you. And yet we are never sufficiently horrified. We protest that we are being led down a slippery slope when words like "affirmative consent" are brought into the conversation. Scoff at "rape culture" as some progressive delusion traded among feminists. We question data, ask for better numbers. We are caught in a holding pattern in which we force victims to carry weight for the rest of us until we're ready to do better, and we are never ready to do better.

But one thing that is clear from Young’s piece, and from other writing on Sulkowicz and the long list of victims whose assaults have been swept under the rug, is that the current system isn’t working for anyone. And as Alexandra Brodsky wrote last month at the Prospect, schools can work to balance the interests of victims and alleged abusers and create a transparent process that addresses years of institutional neglect and misconduct that has produced a system that no one trusts.

But in order to do that, we have to be clear that the problem of rape, on campuses and elsewhere, is real. That our culture normalizes sexual violence and there are currently very few institutional structures in place to change that. That we routinely tear apart individual rape victims' stories as a justification for our inertia on changing a failed system. Writing that serves only to cast doubt on claims that rape is a crime that is prevalent and woefully underreported doesn’t bring us anywhere closer to correcting a system that has failed so many so terribly and so predictably.