On the way to its finale, the show wrapped up a long-standing joke -- Donna's hated brother Levondrius 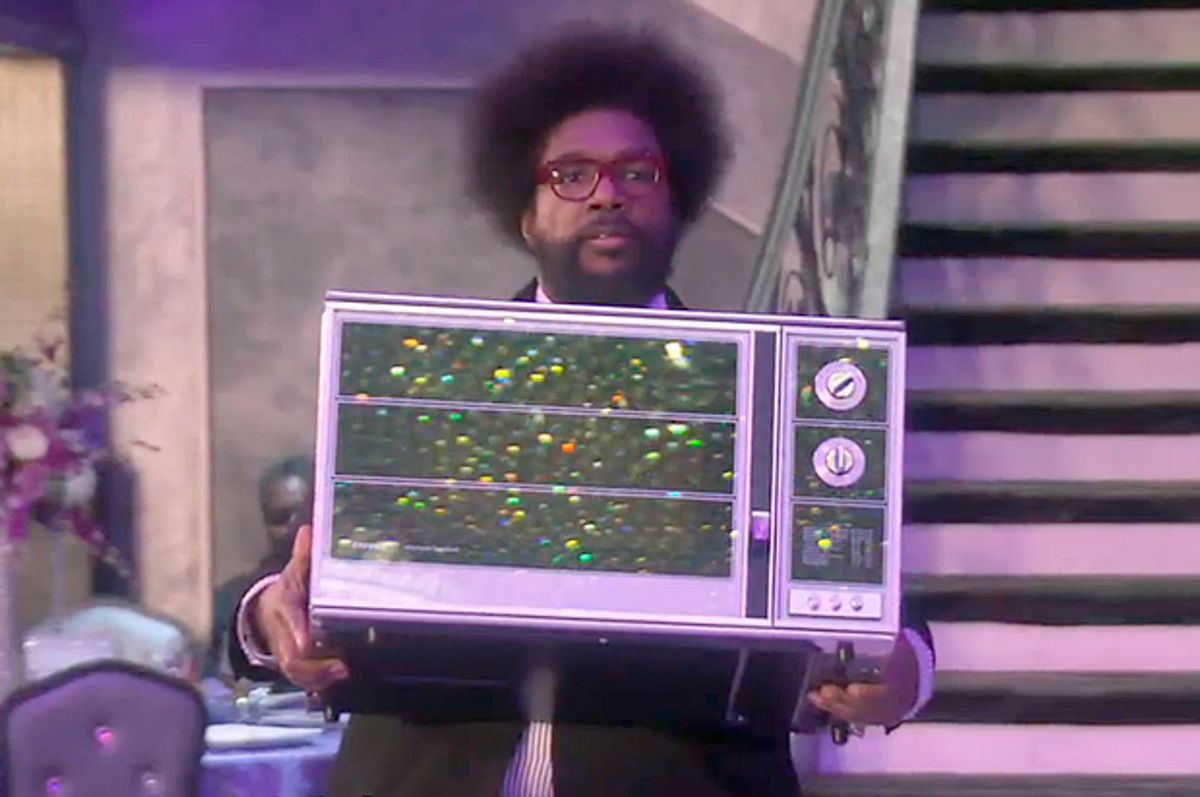 Questlove in "Parks and Recreation" (NBC)
--

As the end nears, "Parks & Recreation" has stayed true to the show’s reputation for flawless cameos: From Werner Herzog as Andy and April's creepy landlord to Leslie's hallway run-in with Michelle Obama. And last night brought with it yet another spot-on guest spot, with Questlove as Donna's estranged brother Levondrius. Yet another strong final-season episode, it also featured the quintessential "Parks & Rec" cameo: Short and sweet — more a subtle sprig of garnish than the episode's meat and potatoes — self-referential and charmingly meta all at once.

"Parks & Rec's" final season has been a lot about giving audience closure, complete with returning favorites (Jon Hamm's Ed, Megan Mullally's Tammy), easter eggs and inside jokes coming full circle. Seeing the return of Donna’s estranged brother Levondrius is "Parks" doing what it does best — turning what may have seemed like a long-ago throwaway line into a full-fledged bit, a gag made flesh. “I love you like a brother,” Donna told Ron back in “Ron and Tammy: Part 2." “But right now, I hate you like my actual brother, Levondrius. Who I hate.” For a purely joke-based show, that would have been that.

But like other comedies of its caliber (like "30 Rock" and "Arrested Development"), "Parks" is a fully developed world, where longtime viewing pays off, and where bits build on each other and call back in intricate ways. It speaks both to the textual richness and genius subtlety of "Parks & Rec" that jokes with years of lead-up -- namely, Donna's cousin Ginuwine and estranged brother Levondrius -- need only a few seconds of payoff to hit home, as they did last night. These sorts of finely honed character details also illustrate why fans feel so connected to the "Parks" gang. Even with a peripheral character like Donna, we're made to feel like we truly know her, as all the little details amassed over the years are folded believably into the character's outsized mythology.

Questlove’s cameo was also great because it doubles as a shout-out from "Parks" to its fans. First off, it goes without saying that Questlove, like Warner Herzog, is somewhat of a legend in his own right, with such a distinctive presence of his own — I don’t think Questo even so much as went to wardrobe here — that merely seeing him show up in a scene is utter fan fodder (for similar work, see his cameo as a corpse on "Law and Order SVU").

Yet Questlove himself is also a long-documented "Parks" devotee. Back in 2010, he even made a “Funny or Die” video proving his long-held theory that “Parks and Recreation is the Wu-Tang of comedy.” "Parks & Rec" is a show that exists because of its fan following, one that never found a wide audience but instead was kept afloat by a small and deeply devoted base of core fans. As I mentioned, this final season has been a lot about giving the viewers what they want; by letting Questlove, a diehard fan like us, finally get a chance to be part of the gang, it's as if "Parks" is simultaneously turning to its audience and giving us a wink, thanking us for supporting them for all these years. We’ll miss them so when they go.