"The truth is unspeakable": A real American sniper unloads on "American Sniper"

"The truth is unspeakable," says real-life American sniper who wants nothing to do with a dangerous propaganda film 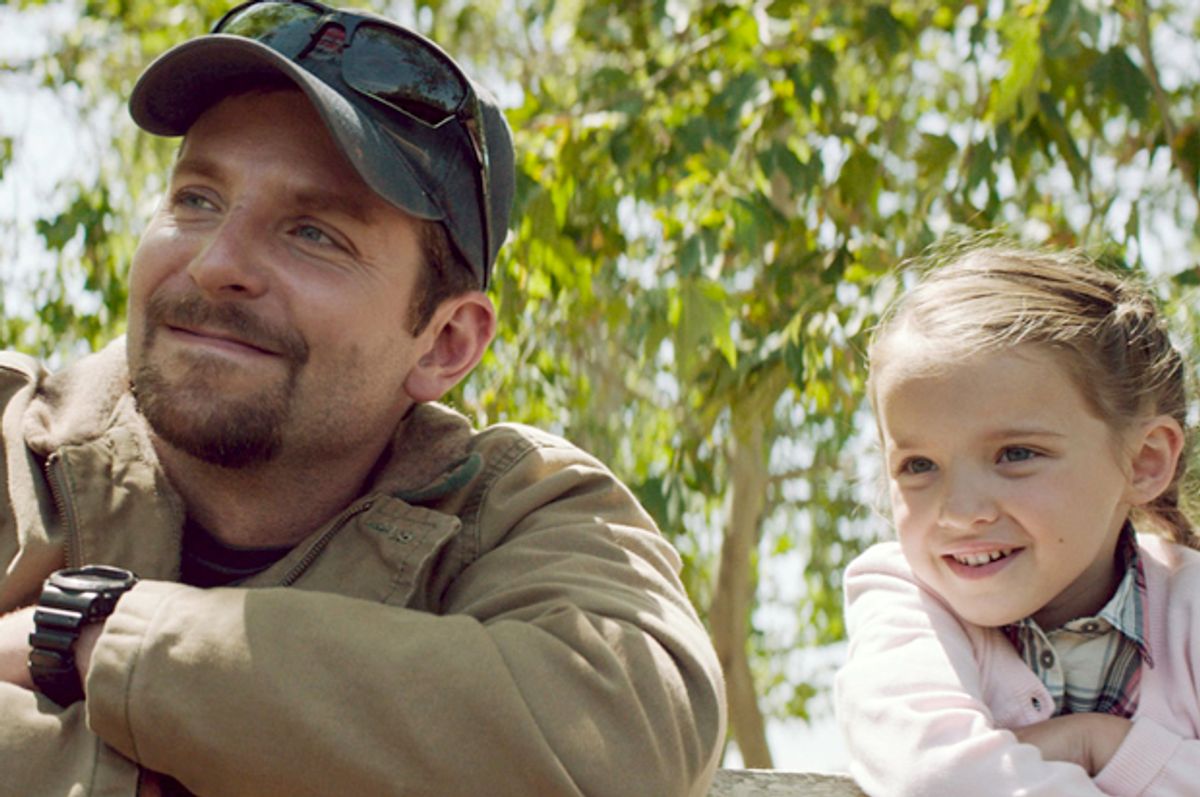 Hearing Garett Reppenhagen describe how he felt the first time he shot someone is like listening to an addict talk about his first time injecting heroin. “I leveled my M-4, put him in my iron sights, and took three shots. One of them hit him center mass and he went down in the middle of the road. I had this instant sense of satisfaction, overwhelming excitement and pride. It was really kind of an ecstatic feeling that I had.”

Garett has a lot in common with Chris Kyle. Both entered the military at an older age; both spent endless hours on rooftops, in windows or in trash piles in Iraq, “doing their job”; both were in Iraq in 2004 hunting al-Qaida leader Abu Musab al-Zarqawi; and both spent time after active duty trying to help veterans.

The similarities end there.

I’ll admit, listening to Garett talk about his first kill, taking place when he was ambushed and life presented him a clear choice -- kill or be killed -- I’m a touch envious. Life rarely offers us such moments of clarity. As haunted as Garett and others who struggle with post-traumatic stress disorder are because of events like this one, he was describing a moment so simple and so heightened because of that simplicity.

“I was training for three years to be in the moment to do that, and I did it,” Garett tells me. “It was really an ecstatic feeling that I had. I remember looking at the other guys, seeing if they saw it, because I wanted somebody else to witness it.”

In 2004, while Garett was in that life-or-death firefight, the mundane questions life presented me with could easily paralyze me. What should we do for dinner? Where to go on summer vacation? Boxers or briefs? This paralysis is a common side effect of privilege: We get to sweat the small stuff when the big stuff is never in doubt. When faced with a kill or be killed moment, one answers the former, or one is dead. It does not get any clearer than that. I fear that if I found myself in Garett’s 2004 shoes, I would have soiled my boxers and my briefs.

The only time Chris Kyle says he soiled himself was on purpose. He would not leave his position to answer nature's call so he just kept his rifle trained and went to the bathroom in his pants. Such was his commitment to God and country. In a micro sense, it served him well. In a macro sense, however, our invasion and occupation of Iraq was not a “kill them or they will kill us” scenario. History has borne that fact out, and that lack of context makes "American Sniper" a dangerous film.

Dangerous because kids will sign up for the military because of this movie. Dangerous because our leaders have plans for those kids. Some will kill. Some will be killed. Or worse. There is no narrative existing outside the strict confines of "American Sniper's" iron sights that allows for the war on terror to be over. It’s like a broken record looping over and over: attack, blowback and attack. Repeat.

Imagine the cultural shift that needs to take place for screenwriters to write, studios to greenlight, and A-list Hollywood actors to portray an American hero who says something like this in a blockbuster movie:

“You feel like there is this debt that you build for every life that you take,” Garett tells me. “You feel like you owe the world something because you left it without this other person that could have done something amazing. I think about all of these soldiers coming out of the U.S. military and helping them get jobs and education and hearing about what they aspire to do and be in the world. And I wonder about all of the Iraqis, Syrians and others that we killed in that country and what they aspired to be.”

Garett wonders about the mothers of those we killed in Iraq. What aspirations were dashed when an occupying force killed their children, for whom they invested so much of their lives?

He did not keep track of his kills and he hates that I ask him for a number.

“I wasn't keeping track and oftentimes there was no confirmation. I feel it didn't make me a better soldier and certainly doesn't make me more of a man. If Chris Kyle got 160 confirmed kills, I joke and say that I missed 160 times. I wish that was true. We are talking about human beings and I hate quantifying that. Each life is so precious. We destroy that every time. One was too many, the truth is unspeakable.”

Garett came home and began speaking out. He still does, in fact.

“I do antiwar talks in high schools and colleges. I stopped telling war stories at these events because no matter how bad and awful it sounds, you can still see the look in kids' eyes that say, ‘That is the rite of passage, that is how I become a man. I have to go there and live through that horrible shit to know that I am an adult.’”

Reppenhagen is certain there will be young kids who join the military because of the movie "American Sniper." Life, however, is never as neat as Hollywood.

Take Garett’s first hit, the one he described as giving him a feeling of ecstasy. The feeling did not last long. His target was not dead.

“I remember looking back and he was down in the middle of the road arching his body, spinning on his back and screaming and pulling on his stomach as if I shot him with an arrow and he was trying to pull it out. All the sense of satisfaction just washed away and this horror filled it -- this sadness, anger and frustration. I was mad at him that he just didn’t die. I ended up putting another three rounds down and he finally stopped moving. That was the first time I took another life.”

There is a long pause on the other end of my phone.

“He looked like he could have been my father. Who knows why he was out there fighting. A lot of people were fighting us because they did not want to be occupied or because they had family members who were hurt or killed and they wanted to get some sort of vengeance. By the end of my tour, it was really hard to justify killing them. We should not have been there in the first place.”

While in Iraq, Garett was told by an army chaplain that a stronger belief in God would alleviate the guilt he was feeling. God was on America’s side, and Garett was fighting for God and country. Get over it, soldier.

Once home, he sought treatment for his PTSD from a Veterans Administration hospital and heard the same message delivered in a different way.

“I was taken aside more than once at the VA [during group therapy] and told that the VA is not a platform to express my political views. My recovery hinged on the fact that I felt guilt and shame over committing atrocities against an occupied country. We went over there and brutalized and oppressed, and that is part of my psychological and moral injuries. If I can’t talk about it at the VA, then the VA can’t help me.”

Garett’s views are "political," but the worldview of Chris Kyle as brought to life in "American Sniper" is not. It may be true that it is good for box office for the creators of "American Sniper" to pretend that their movie is not a political one, but if Cooper and Eastwood actually believe that, any narrative not draped in yellow ribbons and billowing red, white and blue flags cannot penetrate the cloak of white imperial privilege they have pulled over their heads.

Which is unfortunate, and not just for those of us who are insulted by a movie that so ignores important historical context as to cross the line from art to propaganda. It robs movie lovers of a better movie. Allowing such complexities into the narrative, or even framing the context of Kyle’s time in Iraq truthfully, would have made it a stronger story.

We are living through a moment in time where a perverse experiment has gone wrong and led to the creation of an out-of-control monster. In this case, the monster itself is the blowback-inducing, homicidal bull in cultural, religious and geopolitical china shops that has been U.S. foreign policy for at least the past 75 years. That concept, personified, is the myth of Chris Kyle that is breaking box office records and marching toward the Oscars with all of the pomp, precision and sense of a rightful place at the head of the line displayed by the Marine Corps Marching Band at the Rose Bowl Parade.

In addition to the outright lies (weapons of mass destruction, a connection between Iraq and 9/11, etc.), the main ingredient of this nightmare is the belief in American exceptionalism: the wind beneath the wings of the 19th century concept of Manifest Destiny. The offspring of that concept, we can call it Manifest Destiny’s child, is a privileged, spoiled, brutal bully on the world stage.

That Chris Kyle, nurtured as he was by the insidious worldview of Manifest Destiny’s child, turned out the way he did makes him common.

That someone like Garett Reppenhagen emerged from this experiment honestly facing down his own demons and the demons of his country makes him a hero, worthy of a major motion picture in his own right.