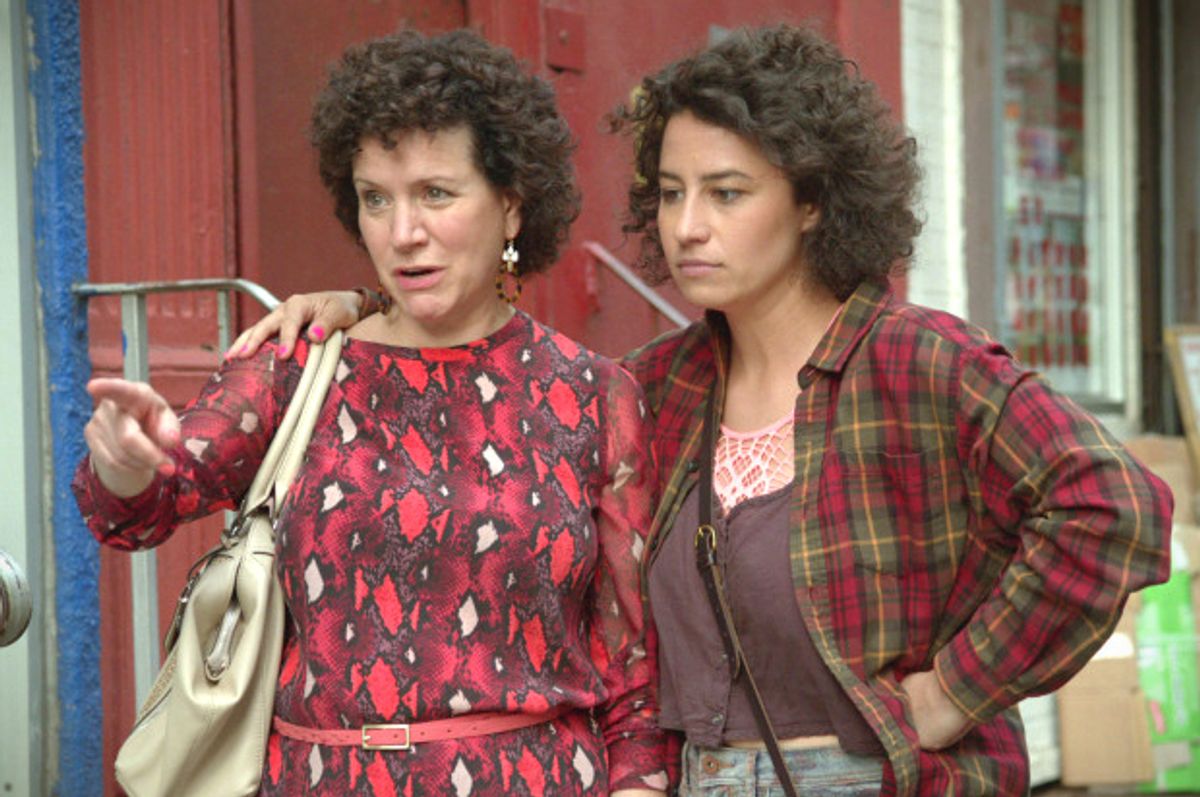 Last night was one of the best all-around "Broad City" episodes to date, yet not only for Abbi's surprising sex scene. Rather, it was Ilana's storyline that reminded me why I love this show and that curly-haired, twerking, high-waisted-short-rocking spitfire so damn much. Ilana’s mom Bobbi (Susie Essman of "Curb Your Enthusiasm," perfectly cast) comes into the city to sit Shiva for her own mother — but not before hitting Canal Street to buy some counterfeit leather bags as a way of coping with her grief. These Canal Street scenes are brilliant — the pair are thrown blindfolded in a van and climb down a manhole, and Bobbi even yells in excellent Chinese about the difference between a stitch and a sailmakers stitch, all in pursuit of quality fake purses.

Last week I wrote about how well the show makes use of New York City; more than any other show, it inhabits the version of the city that I live in, perfectly depicting its idiosyncratic landmarks and commonplace eccentricities. Perhaps that’s why this scene resonated with me so much: As a young teenager, visiting the city to shop for fake bags on Canal Street with my mom was an annual ritual. Our mental map of NYC included not Times Square and the Empire State building, but the trap-door behind the dumpling place that yielded really good Coach clutches (forgive me, it was the ‘90s). Perhaps this story will only resonate with a specific subset of people, but for me it got everything right — the excitement of turning low-grade criminality into a mother-daughter bonding ritual, the inane conversations about Jay Z and Beyonce. Much of the show’s humor lies in its specificity, both geographically and in terms of its characters and relationships, and they totally nailed it here. Rarely have I seen an interaction that so hilariously reflects memories and interactions that I thought were specific to my life alone.

And meeting the rest of Ilana's family offered more moments of self-recognition. The Shiva, with the casual inappropriateness from her no-filter, charmingly sex-positive family, speaks to the breed of reform Judaism I grew up in and its unmistakeable characters. (Amazon's “Transparent” is another show that hits the nail on the head in this department.) The relationships feel believable and genuine: The lovable softie of a father (Bob Balaban, in another perfect bit of casting), the deceased grandma ("that badass bitch did everything she wanted to do"), and of course, Ilana's mirror-image of a mother, the fearless Long Islander who brings her own nail polish to the salon and learned passable Chinese in the name of cheap leather goods.

While I love the insular Abbi-and-Ilana-vs-The-World thing the show has created, meeting Ilana’s family made me appreciate her even more, if that's possible. Of the two, Ilana is much harder to relate with -- as our own Laura Miller recently put it in her recent defense of Abbi, Ilana is the "Marxian spirit of anarchy" to Abbi's every(wo)man. Etching Ilana into this very precisely-drawn social milieu helps us to better understand her as a concrete human being born out of specific circumstances, not just another manic pixie dream-friend, without undermining any of the absurd, whimsical energy that makes her such a dynamic comedic character.

But of course, while the pair’s plot-lines diverged for much of the episode, some of the best moments featured the two of them together: Ilana encouraging Abbi's sexual exploits via phone from her counterfeit-purse-dungeon ("You wanna go to the grave dreaming of Jeremy's hairy adorable little butthole?"), Abbi getting interrogated about pegging by the Glazers, and the final scene, when Jeremy is out of the picture and the episode ends on the two girls -- the show's true OTP -- snuggling in bed. You may pick a favorite from week to week, but it's the relationship between Abbi and Ilana that keeps us coming back.