"It's Always Sunny" pulls a "True Detective": How this weird little comedy became king of the pop culture homage 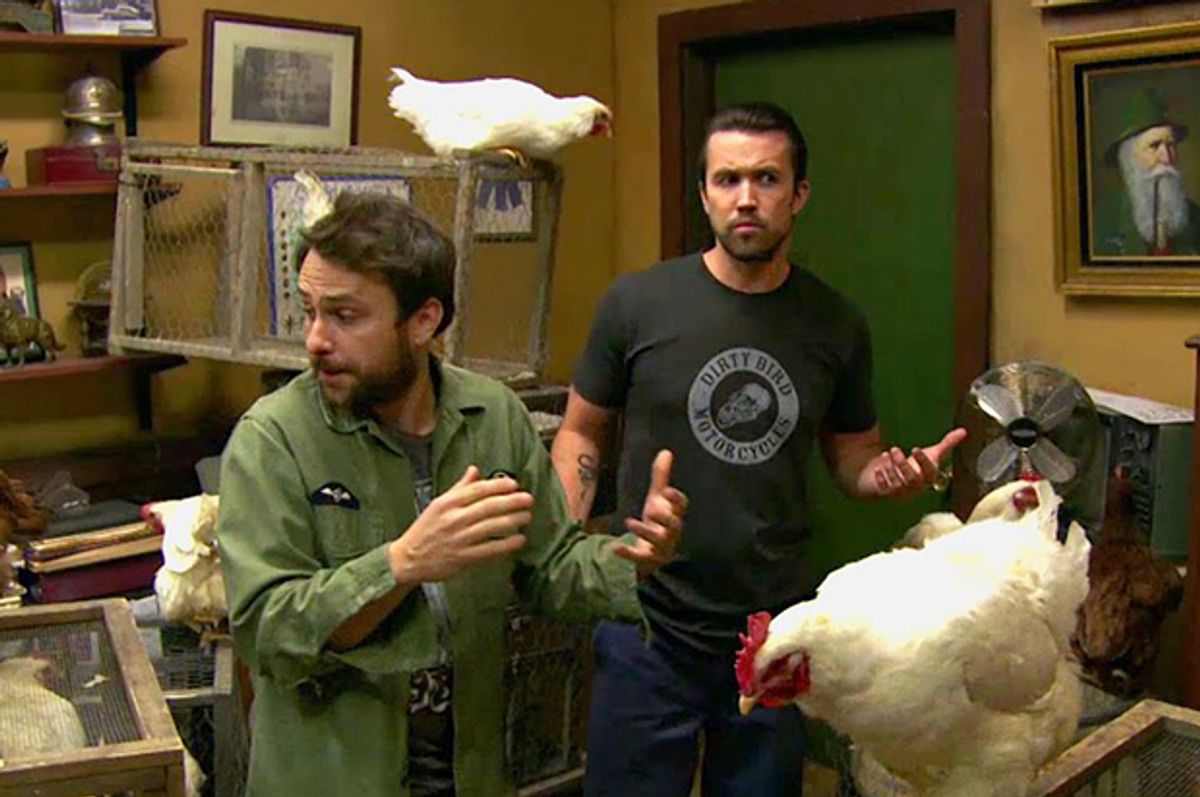 This week's episode of “It's Always Sunny in Philadelphia" featured a seven-minute tracking shot chronicling the gang's attempts to save the bar from failing its health inspection (pretty impressive considering the interior and exterior of the bar are in different locations). While it may have seemed like a very timely “Birdman” parody, EP Glenn Howerton (aka Dennis) confirmed that it was actually an homage to "True Detective"'s famed six-minute tracking shot from last year. Either way, it's the sort of high-concept experimental filmmaking that "It’s Always Sunny" has consistently been doing, too-often unrecognized, week after week for the past ten seasons.

Suffice to say, this isn’t the first time that “It’s Always Sunny” has given a thematic or stylistic homage to some recognizable film or TV artifact. In fact, much like getting addicted to drugs or making Dee dry-heave, it’s one of the things the show does best, and the show ranks up there with "The Simpsons" and "Community" in its level of keen-eyed pop-cultural awareness. Here’s a look back at five highlights:

“One Flew Over the Cuckoo's Nest” (episode: "Sweet Dee has a Heart Attack")
With the level of commitment Danny DeVito has given to his brilliantly bizarre turn as Frank Reynolds in recent years, it can be hard to remember that he came up as a serious dramatic actor. After Dee is hospitalized in season four’s “Sweet Dee has a heart attack” episode, Frank is sent to a mental hospital after taking too many anxiety pills, and  we get a neat little reminder -- in the form of an epic, meta-callback to DeVito's star-making role in "One Flew over the Cuckoo’s Nest." The episode draws heavily from "Cuckoo's Nest," including a character called Martini ("hit me, Mac!"), a Big Chief-esque character (played by the son of the original Big Chief), medication time, and even ending with the movie's closing theme music. This episode is also a standout example of mixing pop-culture homage with the sort of self-knowing meta commentary that the show also excels at, like "The Gang Tries Desperately to Win an Award" episode, which references the show's conspicuous lack of Emmys. (Give the gang an Emmy, damnit!)

“Million Dollar Baby” (episode: "Hundred Dollar Baby”)
One of the earliest fully-realized parody episodes, in season two, wherein Frank trains Dee to compete in a boxing match against the daughter of his old rival. (Meanwhile in the B-plot, Dennis and Mac enter Charlie in a fight club). Anything that allows the gang to run rampant with physical violence is pretty good, as is any excuse for trash-talking, aggressive drug use and fist-fights, which this episode has in spades. If only the Clint Eastwood movie was this entertaining.

“Pretty Woman” (episode: "Frank's Pretty Woman”)
In the "It's Always Sunny" version of the Julia Roberts movie, Frank wants to marry a prostitute named Roxy, and Dee decides to "Pretty Woman" her up. Naturally, things turn Always-Sunny-levels of dark very quickly, with Roxy, high on crack rocks that were stored in her anus, falling on the floor and dying while Frank proposes to her. Like we said, dark. This episode also yields one of the best -- and most surprisingly moving -- Frank Reynolds speeches ever: “I love eggs, Charlie. And I love crabs. And I love boiling denim and banging whores. And I don’t care if anyone doesn’t like that about me, they don’t have to stick around."

"Flowers for Algernon" ("Flowers for Charlie")
A spot-on parody of “Flowers for Algernon” (with a little helping of “Limitless”), written by "Game of Thrones" showrunners David Benioff and D. B. Weiss, this super-high concept episode mirrors the famous Daniel Keyes short story in which a man named Charlie is given a pill to make him smarter. Aside from the obvious similarities — y'know, a man named Charlie being given a pill to make him smarter -- the episode works so well because it’s a brilliant showcase for the incomparable Charlie Day, who plays smart just as well as he plays dumb. Pompous Charlie highlight: "Stephen Hawking is much more of a Lady Gaga than a Johann Sebastian Bach. He’s a pop culture figure, like the Kardashians."

"Lethal Weapon 5" ("Dee Reynolds: Shaping America's Youth")
The gang's 6-and-a-half minute "Lethal Weapon" sequel really needs no introduction (well, except for a warning to steel yourself for the amount of blackface. We never said these homages were appropriate).