On Sunday night, watch many talented people lose spectacularly in NBC's "USA vs. the World" 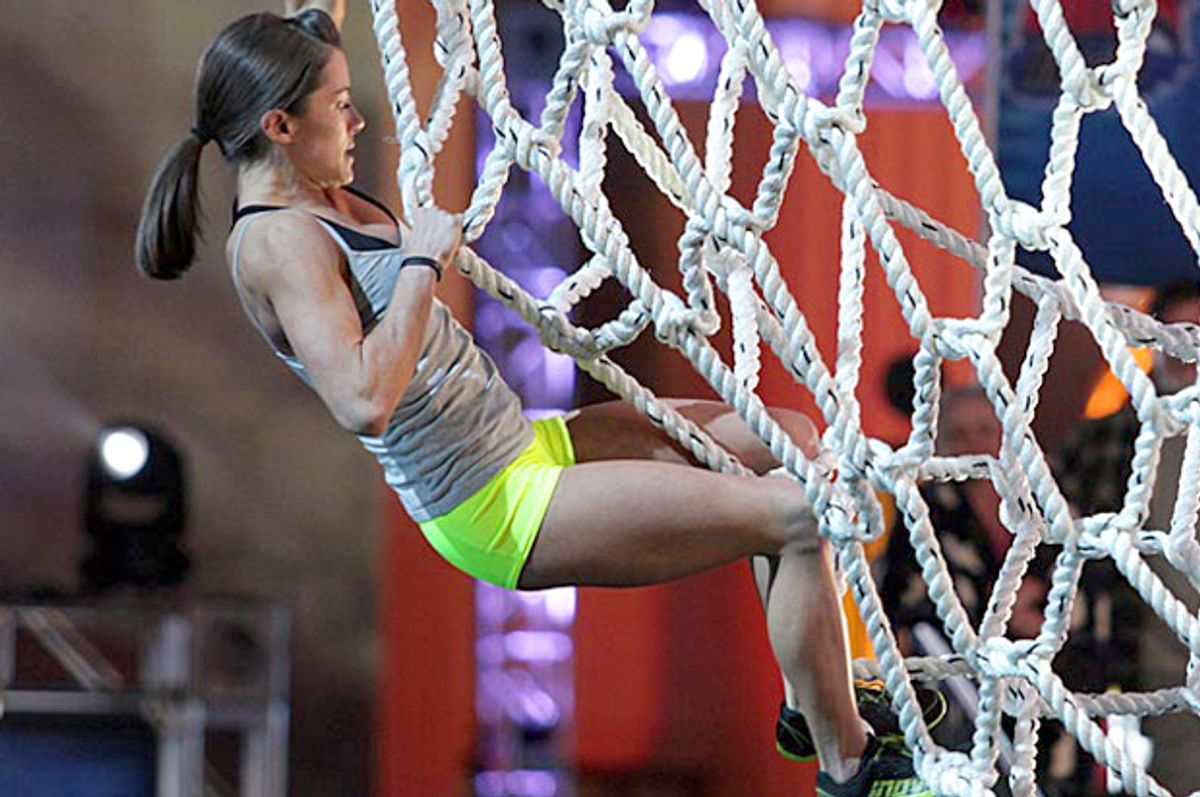 Here is the most important thing you need to know about “American Ninja Warrior”: In the six seasons the obstacle-course game show has been on the air, no one has ever won it. Winning—or, as the show calls it, “total victory”—is achieved when a contestant can make it through four different stages of a huge obstacle course within a certain amount of time without failing or falling or giving up. It is an elaborate, fantastical playground of an obstacle course, all tailor-made for the show. The stages are made up of specific, apparatus-based challenges, and each one has a poetic, sometimes even whimsical name: “Jumping Spider,” “Monkey Peg,” “Bridge of Blades,” “Floating Stairs,” even “Rolling Escargot.”

The challenge names’ childish appeal belies their incredible difficulty: Olympians, professional athletes, Navy SEALs and gymnasts have all failed to make it through all four stages. Jumping Spider requires the athlete to leverage off of a mini-trampoline into a man-made gap about 5 feet wide; using just their arms and legs, the athlete must shimmy through the gap, star-shaped, without falling. Just in case that didn’t sound hard enough, the gap widens as you advance, meaning the contestant has to stretch farther and farther to not fall.

This summer, when Kacy Catanzaro became the first woman to advance to the fourth and final stage of “American Ninja Warrior,” she got to Jumping Spider after advancing through Piston Road, named after stepping blocks shaped like huge pistons placed at precarious angles over a pool of water; Giant Cycle, where she used a mini-trampoline, again, to grab one edge of a huge wheel, and then used that momentum to make the wheel rotate so she could hop off on the other side; and Silk Slider, where she wrapped her arms around two lengths of red silk, suspended from the ceiling, and swung from one side of the course to the other. Jumping Spider was the fourth challenge of the eight needed to complete the final.

Catanzaro, 25, is a 4-foot-11 gymnast. Her qualifying round in Dallas is the most-viewed “American Ninja Warrior” video on YouTube—she makes the challenges look effortless, moving from the gravity-defying Log Grip to the Warped Wall with unmatched facility. (If you watch the video, you can hear both the crowd and the professional commentators, Matt Iseman and Akbar Gbaja-Biamila, losing their minds. At some point, Gbaja-Biamila says, “She’s not human! She’s not human!”) But she is an inch shorter than the 5-foot-wide opening of the Jumping Spider gap. Stretched out as she was, straddling and reaching out with her full wingspan, she was not able to keep her grip on the wall. She slipped and fell into the water, having gone farther than any woman in the competition.

It must have been disappointing—you don’t get to that level of physical training without wanting it. But in the debrief, immediately afterward, Catanzaro looked almost as happy as if she’d won it. “I took a little tumble, but it’s OK,” she said. “All of this has been a dream…. I couldn’t have asked for anything more this season.”

This past summer—in part due to Catanzaro’s successes and likability—“American Ninja Warrior’s" cult appeal went mainstream. The Boston Globe reported that more and more gyms were offering training obstacle courses that tried to imitate the scope and challenge of the “American Ninja Warrior” arena, Mount Midoriyama. The fantasy-like obstacle course appeals to kids and teenagers, which make up a big portion of the audience; the bodybuilding appeals to 20-something men, which make up another core section of the audience.

What’s fascinating is that there’s an audience for this show at all. The Super Bowl ends with confetti and a few trophies; the Olympic games reliably hand out a bunch of medals, winter or summer. “American Ninja Warrior” has a grand prize of $500,000 that has never been won. But fans still want to compete. Dave Cavanaugh and Jenny Lawler of Hull, Massachusetts, waited five days in line to compete in the qualifying rounds’ obstacle course. They did not qualify. They did, however, return home and started constructing their own equipment to train. The line between fans and on-show competitors is purposefully narrow.

“American Ninja Warrior” is the American version of the incredibly popular Japanese original, “Sasuke,” which has been on the air for 30 seasons. In that time, three men have made it to total victory. One of those men, a shoe salesman named Yuuji Urushihara, has won twice. As might be expected from a Japanese game show—which have a level of surrealism to them that Americans can’t match—the competition is designed to be even more fruitless. In the American version, the top 30 contestants from a stage will get the chance to advance to the next stage. In the Japanese version, only competitors who complete the stage will advance. Which means it could be all 100 contestants from the season … or all zero, depending on how that year’s competition goes.

Sunday night, NBC will air a three-hour “American Ninja Warrior” special, titled “USA vs. the World,” in which the top five contestants from the history of “American Ninja Warrior,” “Sasuke” and “Ninja Warrior Europe” will go head-to-head to win points for their respective teams. Because no one can really be counted on to finish the stages, there’s a tiered system of points. It is complex, and it doesn’t matter, because winning is not the point. The “Ninja Warrior” franchise is singular for subverting what we see as the point of games—deemphasizing winning so as to focus on the particular textures of losing, whether that is badly, triumphantly or spectacularly. Even those contestants who finally win, in “Sasuke”—every time, they’ve lost at least once before they’ve succeeded, and even after they’ve won, they come back to try their hand at the playground again. Rather than focus on winning—or statistics, as so much modern sportsmanship does, or on war training, which is where Olympic events like the pentathlon come from—“American Ninja Warrior” is about people of varying skill throwing themselves at beautiful, impossible constructions that they can only vaguely predict and only sometimes train on beforehand. And they are all failures, but still really happy to be there. “American Ninja Warrior,” I would surmise, has so many fans because it feels so much like life itself, which asks us all to hurtle, not-knowing, into a world that is impossibly complex. It’s a meditation on failure—the not always graceful process of falling down, and then getting up, and trying again.