Susan Collins' phony immigration "compromise": Give us exactly what we wanted in the first place! 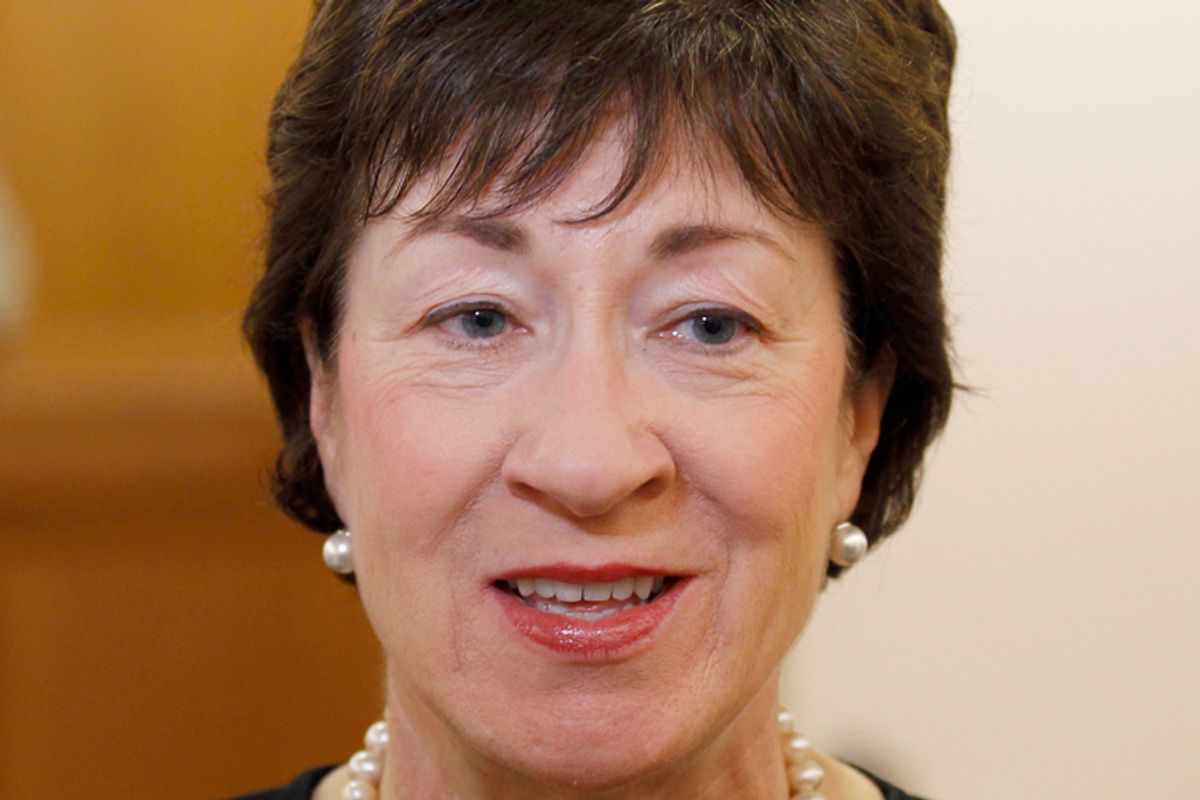 It's hard to call any thought the GOP has for breaking through the DHS-funding impasse of its own making a "strategy," but a certain senator does, at least, have an idea. And it's an idea that the GOP congressional leadership has probably had in mind for some time and has just been waiting to roll out. It's a relatively obvious means of attaining its goal, completely, through a framework that can be called a "compromise." But it is very much not that.

"Centrist" Sen. Susan Collins of Maine, The Hill reports, is floating a "compromise" that purports to meet Republican and Democratic demands for a DHS appropriations bill exactly halfway. Conservatives want a bill that undoes both the 2012 executive action deferring deportations for childhood arrivals (DACA) and the late 2014 program offering relief for up to 5 million undocumented immigrants. That bill passed the House and has since been twice filibustered in the Senate. Even if Senate Democrats were to relent, the White House would veto it. They want a "clean" bill, i.e. a House appropriations bill that doesn't undo President Obama's signature immigration actions. And so Susan Collins is proposing that Congress let DACA stand and nix the 2014 program.

Give the GOP some credit. It's a savvy move to trot Susan Collins out there as the face of this proposal. Serious Beltway pundits love Susan Collins, a senator with an extraordinarily conservative voting record who votes against her party occasionally and isn't an obnoxious blowhard. They love the idea of a "moderate Republican who enjoys working across the aisle," and Susan Collins is the closest ancestor there is to that extinct species.

It's also clever to trot Ted Cruz out there with her. That's right, Susan Collins and Ted Cruz working together to bridge the gap! We're not saying that this precludes the possibility of a House conservative rebellion against this more moderate immigrant-punching iteration, but it would certainly help mitigate that risk.

So what's the problem with this Grand Compromise, brought forth by generals from the very conservative and still-more conservative wings of the Senate GOP? Probably that it's not so much a compromise as giving Republicans the exact thing they've wanted all along.

The idea of funding DHS on a short-term basis was to buy the party a few more months to figure out how it would respond to President Obama's 2014 executive actions on immigration. Conservatives wanted to undo the 2014 executive actions through the appropriations process; moderates and the leadership didn't think that was feasible. So leadership threw conservatives a bone in the form of a protest vote and punted DHS into the new Congress.

When the House Republicans in the new Congress drew up their DHS appropriations plan at the beginning of the year, they threw in a DACA repeal on top of the one repealing the 2014 actions. This came as a surprise, because it was the addition of one aggressive demand on top of another. I had wondered when they did that if the addition of DACA was just a negotiating ploy that they'd then claw back later and frame their initial proposal as a "compromise." That's the option Cruz and Collins are pointing to now.

It doesn't strike me as much of a compromise to give the GOP the precise thing it wanted before it started throwing in additional demands. It wouldn't make much sense, say, to want a bill repealing Obamacare, then throw in an amendment calling for the internment and torture of all registered Democrats, later remove that amendment, and call the bill repealing Obamacare a piece of compromise legislation worked out among honorable dealmakers. In other words, the GOP is trying to move the goalposts.

The centrist/conservative Democrats senators who aren't exactly happy with President Obama's 2014 executive actions have nevertheless been clear that they won't support undoing them through the DHS appropriations process. If Republicans go with the Collins/Cruz pretend-compromise plan, and those Democrats keep to their word -- never a sure thing -- then the pretend-compromise would also be filibustered. Republicans may feel that this gives them enough ammunition to win over public opinion in the event of a partial shutdown. That's probably not true, but hey, go for it.