Twitter's NFL moment: Admitting you "suck" at dealing with abuse is easy. Not sucking takes work

The NFL has made cosmetic changes to avoid bad press on domestic abuse. Will Twitter do any better? 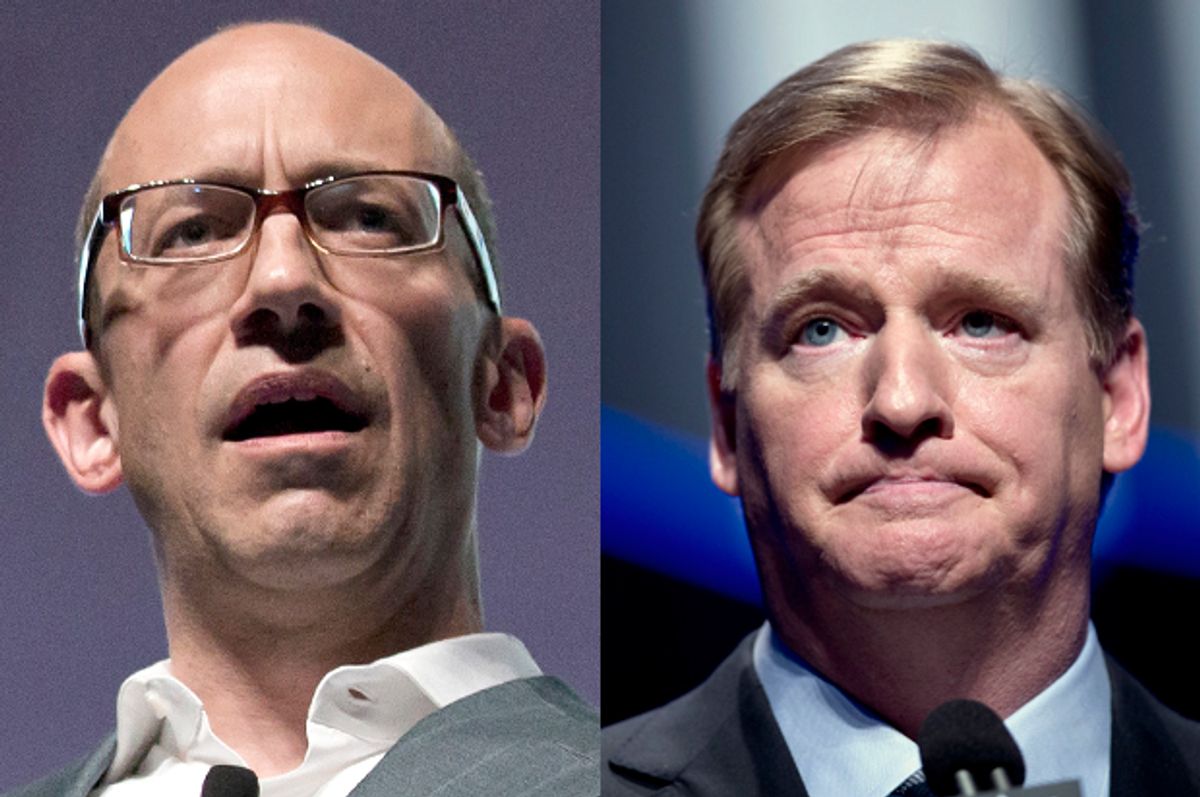 Twitter CEO Dick Costolo this week said that he takes “personal responsibility” for the abuse, harassment and stalking that has gone unchecked on his platform, like the rape and death threats that last year drove Anita Sarkeesian from her home. (And still continue to flood her mentions.) "We suck at dealing with abuse and trolls on the platform and we've sucked at it for years," Costolo wrote in an internal memo obtained by the Verge. "It's no secret and the rest of the world talks about it every day. We lose core user after core user by not addressing simple trolling issues that they face every day."

Publicly acknowledging when you mess up can be an important part of fixing a problem, and Costolo’s willingness to say in plain terms that he got it wrong is significant. But I can’t help but think of NFL commissioner Roger Goodell's “I got it wrong” press conference and wonder if, like the NFL, Twitter will make cosmetic rather than structural changes to address the bad press but leave its abuse problem festering.

It's too early to tell, but part of what feels lacking in Costolo’s apology is any explanation of why Twitter ignored its abuse problem so consistently and for so long. Why did Twitter allow itself to suck so badly? Was it because the company was concerned that cracking down on the harassment of women, particularly women of color and trans women, would alienate a certain kind of white cis guy on Twitter whom it considered part of a more valuable consumer demographic? Was it because it understaffed and under-resourced the people responsible for fielding harassment reports and blocking serial offenders? Is it because it didn’t know how to recognize violent harassment even after it was reported? These aren’t insignificant questions, and will determine what will need to be changed in order to address the real problem.

The NFL was compelled to act and acknowledge its problem with violence against women, even if only superficially, because the bad press became intolerable by some gross corporate metric. The video of former Ravens running back Ray Rice dragging Janay Rice’s limp body out of an elevator wasn’t even sufficient to move Goodell to call for more sweeping reforms or clean the NFL’s institutional house, as evidenced by the two-game suspension Rice received and the generic defenses from the league about Rice being a good player who made a terrible mistake.

It was only after the video from inside the elevator was leaked by TMZ, video that showed Rice cold-cocking Janay, that Goodell changed his tune and suspended Rice indefinitely. And that was because sponsors like Budweiser started getting jumpy about being associated with an organization that coddled, protected and welcomed back men who violently abuse women.

The NFL's "solution" to its problem was mostly to consolidate Goodell’s power and flex its punitive muscle with new fines and suspensions. In reality, the NFL has done little beyond making a few one-off donations to domestic violence hotlines and allocating some of its Super Bowl airtime to an anti-domestic violence PSA.

Diana Moskovitz had this to say about the underwhelming effort in a piece over at Deadspin:

Critiquing any action taken to prevent domestic violence is tricky. It's a national crisis, the effects of which can be seen daily in courtrooms, shelters, schools, and jails everywhere in the country, and any help to stop it is welcome. That doesn't mean, though, that we have to hold the NFL to a standard that says that because any help is good, it's therefore good enough. The NFL is attempting to buy its way out of an immense public relations disaster here. There's no reason it should be allowed to do so on the cheap.

Domestic violence and violent misogyny that threatens and censors women online are enormous and entrenched problems. Beginning to fix them will require more than a few brand consultants and staff trainings. I agree with Moskovitz that the NFL doesn't deserve cookies for doing what amounts to very little, even if it's more than it's ever done before. I have the same feeling about Twitter. Like the NFL, it has the resources to engage in a sweeping, thoughtful process to end the abuse that plagues its platform. It should use them.

The move from Costolo has been well received, if with a bit of skepticism. Lindy West, whose radio piece on the harassment she's received on Twitter put the issue front and center last week, told the Washington Post that she's optimistic that change may come. “This memo is an encouraging step, and hopefully the beginning of a sea change in the industry,” she said.

So the question here is whether Twitter, and Dick Costolo, is ready to do the work that’s required. Its partnerships with organizations like Women, Action, and the Media and activists like Soraya Chemaly could go a long way if Twitter really listens and dedicates time, staff and resources to living up to the guidelines it already has in place. These are groups and individuals that are aware of the layered and complicated ways that abuse manifests, how it is context specific. They are also acutely aware of how even well-intentioned measures can still leave marginalized voices vulnerable.

Which is all to say that Twitter currently has its hands full, if it’s serious about making the platform safe for women. Because admitting you suck is the easy part. Figuring out how to stop sucking will take time.