Eddie Huang is our Richard Pryor: "Fresh off the Boat" and TV history in the making

Asian-Americans have been TVs invisible minority forever, but that's not the reason to love "Fresh off the Boat" 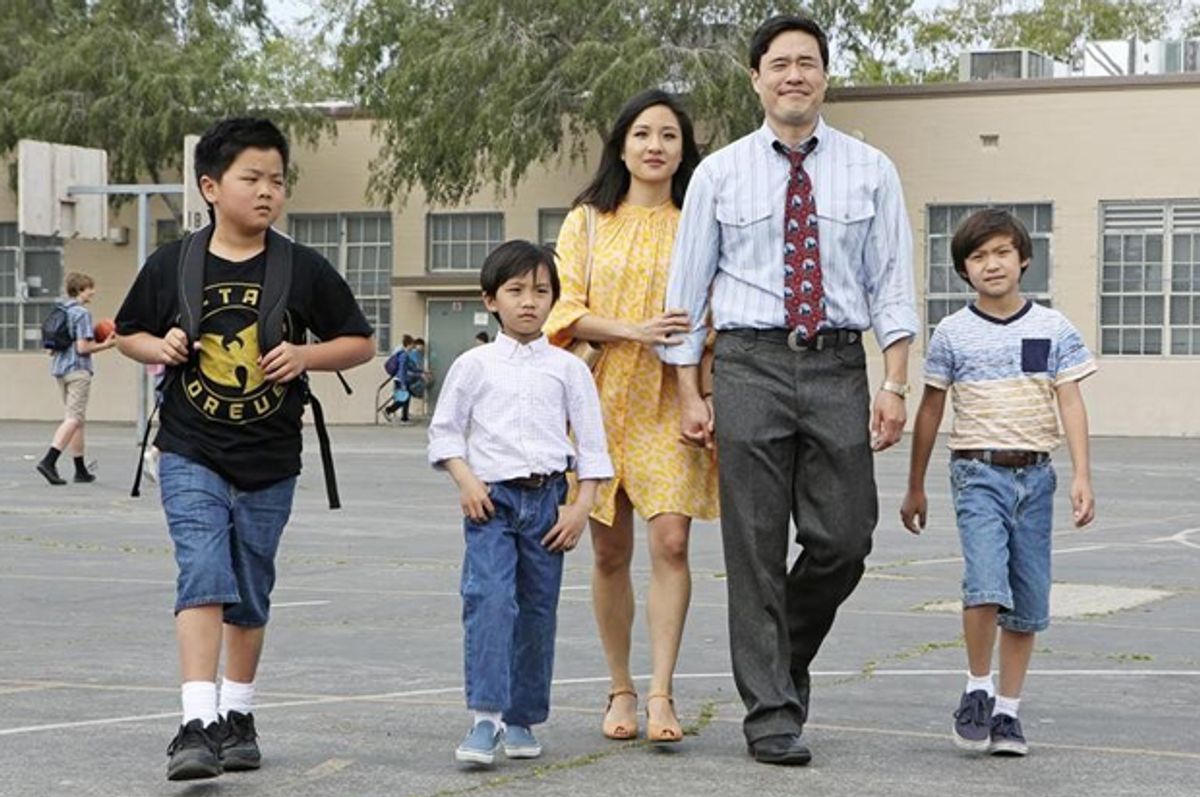 OK, I’m an Asian who writes about pop culture on the Internet, and that means you’re going to hear from me about "Fresh off the Boat" this week. It’s inevitable. If you don’t want to hear about this show I suggest unfollowing all Asians less important than Ban Ki-Moon for at least the next few months.

First off: Watch it. It’s a good show. I mean, don’t take my word for it, the positive reviews are rolling in and we’re already hearing superlatives like “best new sitcom of 2015.”

All I can say is that, as someone who’s seen screeners of the first three episodes, the show only improves after the pilot. I’m willing to put this one on my DVR schedule for the rest of the year.

But I don’t really want to talk, here, about why "Fresh off the Boat" is a good show. I want to talk about why it’s an important show. And why it deserves to be remembered by cultural studies professors and think-piece writers and TV enthusiasts even if, God forbid, it gets canceled after one season.

The most obvious reason is the one that gets mentioned in the lede of every single article about "Fresh off the Boat," so much so that I’ve joked it should be displayed as a subtitle in the main credits. Say it with me, now: “The First Asian-American Family Sitcom in 20 Years (Since Margaret Cho’s 'All-American Girl').”

We all sigh heavily at how incredibly common it is for Asian protagonists to be casually transformed into white protagonists for big-budget adaptations, whether it be of an original American property or a beloved Asian property or, hell, an actual true story about Asian people.

Asian TV addicts all know the story about how supposedly Sun was supposed to fall for Michael and leave Jin in Season 1 of "Lost" only for the network to reverse course once it was clear the viewers--and the actors--wanted an actual loving, functional Asian couple on TV. We all remember freaking out at actual meaty-if-secondary roles for Grace Park on "Battlestar Galactica," Masi Oka on "Heroes," Steve Yeun on "The Walking Dead," Lucy Liu on "Elementary."

I joined the chorus of Asian viewers amped up to see "Selfie" for the sole reason that John Cho was an Asian guy who starred as the primary love interest, something we arguably hadn’t seen since the 1960s, and sighing in despair at its abrupt--if predictable and probably deserved--midseason cancellation. (It helped that John Cho’s love interest was a white chick named Eliza, which has personal resonance for me.)

Seeing "Fresh off the Boat" being written off as “the Asian show” among ABC’s current “diversity slate” pains me.

Not to take anything away from shows like "Black-ish," "How to Get Away With Murder" or "Cristela," which are great shows. But "Fresh off the Boat" stands apart from that pack for many more reasons than the race of its protagonist. It’s as atypical a sitcom development story as you could imagine--it’s not based on an established stand-up comedian’s material, as "Cristela" is and "All-American Girl" was. It wasn’t pitched and developed by a veteran showrunner like Shonda Rimes.

Eddie Huang has very rapidly become one of my idols as I’ve followed his pop culture ascendancy--when Jeff Yang (who happens to be the dad of Hudson Yang, who plays a young Eddie Huang on the TV show) interviewed me last year he told me he saw my public image as very similar to Huang’s, which in hindsight was more of a compliment than I realized at the time.

What is there to say about Huang that hasn’t been said? For Asian-American guys like me he’s the hero we don’t deserve but the one we’ve always needed, the guy who took a sharp left turn off the straight and narrow, smashed right through the guardrail and has been only picking up speed since.

He’s the Asian guy who got laid off from his Big Law associate position and rebounded by selling drugs, doing stand-up and eventually opening a restaurant. He’s the guy who, even after achieving “respectability” with Baohaus being featured in the New York Times, got back in the news with his second venture, Xiao Ye, shutting down after being busted by the cops for selling Four Loko.

He’s the guy who wrote a memoir that drops F-bombs left and right, describes the emotional shock of hooking up with a white girl and seeing “pink nipples” for the first time, quotes hip-hop lyrics at length, frankly reveals his parents as a woman who “got knocked up at a house party” by a man who came to America for “sports fucking,” and boldly grabs onto the third rail of racial politics with both hands. (Asians, the model minority, are “the dude who can cross the union line”; the book is about Huang’s refusal to do so.)

It’s everything that Asians--especially in my experience as a nerdy Asian guy--are told we can’t be: Brutally honest, unapologetically angry, openly selfish, wounded, ugly and profane. Authentically inauthentic--defiantly a product of a Taiwanese kid who grew up in an American suburb, as alienated from his “home” culture as from the one around him. All the things I raged against "The Joy Luck Club," as a child, for lacking. ("The Joy Luck Club" is a great book and Amy Tan is a great author; both of them have suffered the burden of being expected to speak for the whole Asian-American community when they couldn’t possibly do so.)

I’m not Eddie Huang, by a long shot. I was the “banana” (yellow on the outside, white on the inside; a slur for the overly assimilated) to Eddie’s “FoB” (“fresh off the boat”; a slur for the insufficiently assimilated) growing up, the guy listening to Oasis and Third Eye Blind while he was listening to Tupac and Biggie, the guy doing after-school debate team practices while he was out behind the school getting wasted.

I haven’t lived Huang’s life and I haven’t written anything like Huang’s memoir--I think I lack the courage for both. But Huang set an example Asian guys like me needed; he blazed a trail that Asian guys like me are hesitantly following. (If you can’t become a celebrity chef, and then write a blistering tell-all memoir, the next best thing is to become a game show champion and write mildly controversial Internet Op-Eds.)

Eddie Huang is our Richard Pryor, coming along a good 40 years after Pryor exploded onto the scene of African-American entertainers and shattered the expectations of black respectability politics. And Pryor, with his uncompromisingly subversive ethos, was famously unable to keep a TV show on the air for more than four episodes.

Huang has done the next best thing to refusing to compromise and thus getting his show pulled: compromising, but then using the medium of the Internet to loudly announce the fact that he has compromised and call attention to where specifically in the show those compromises are.

Where else--on ABC, on HBO, or anywhere on TV--do you have the originator of a property openly talking shit about the TV adaptation of that property while still performing voice-over and doing press for the show? Even Alan Moore doesn’t have the balls to attack the film adaptation of one of his comic books while simultaneously being paid to act in it. (And Huang doesn’t just attack his own show in that article but attacks TED, ABC and the United States of America along the way.)

And really, by emphasizing how much had to be diluted and whittled down to pass network muster, Huang ends up highlighting just how subversive "Fresh off the Boat" manages to be for a prime-time ABC show. For God’s sake, the title of the show is a reclaimed racial slur, the equivalent of a show about African-Americans titled "Ghetto."

When Margaret Cho’s ill-fated "All-American Girl" came and went with a whimper in 1994, it was two years after the end of "The Cosby Show" in 1992 and right on the heels of "In Living Color’s" 1994 cancellation. With the smash success of "Seinfeld" and "Friends," network TV was about to embark on an era of deciding race didn’t matter and focusing exclusively on the lives of white 20-somethings living in an all-white version of Manhattan.

Now, the pendulum is swinging back, and “diversity TV” is all the rage--and of the “diverse” shows we’re seeing this season, the network TV show that’s most boldly and unapologetically about racism and racial conflict is the one with an Asian cast.

Even just five years ago I would’ve told you that for any “Asian” TV show to get made, no matter how watered down and “safe,” would be groundbreaking. But for this show based on this memoir by this man to get a Tuesday-night time slot on ABC?

That’s fucking miraculous, and that alone makes this show worth DVRing. Even if I didn’t know people involved in the show, even if I weren’t an Asian who wants to see other Asians succeed, even if I didn’t think the show was pretty damn good.

How could I miss it? It’s TV history in the making.