Most media didn't share ISIS's latest atrocity, but Rupert Murdoch's plaything used it for its own purposes instead 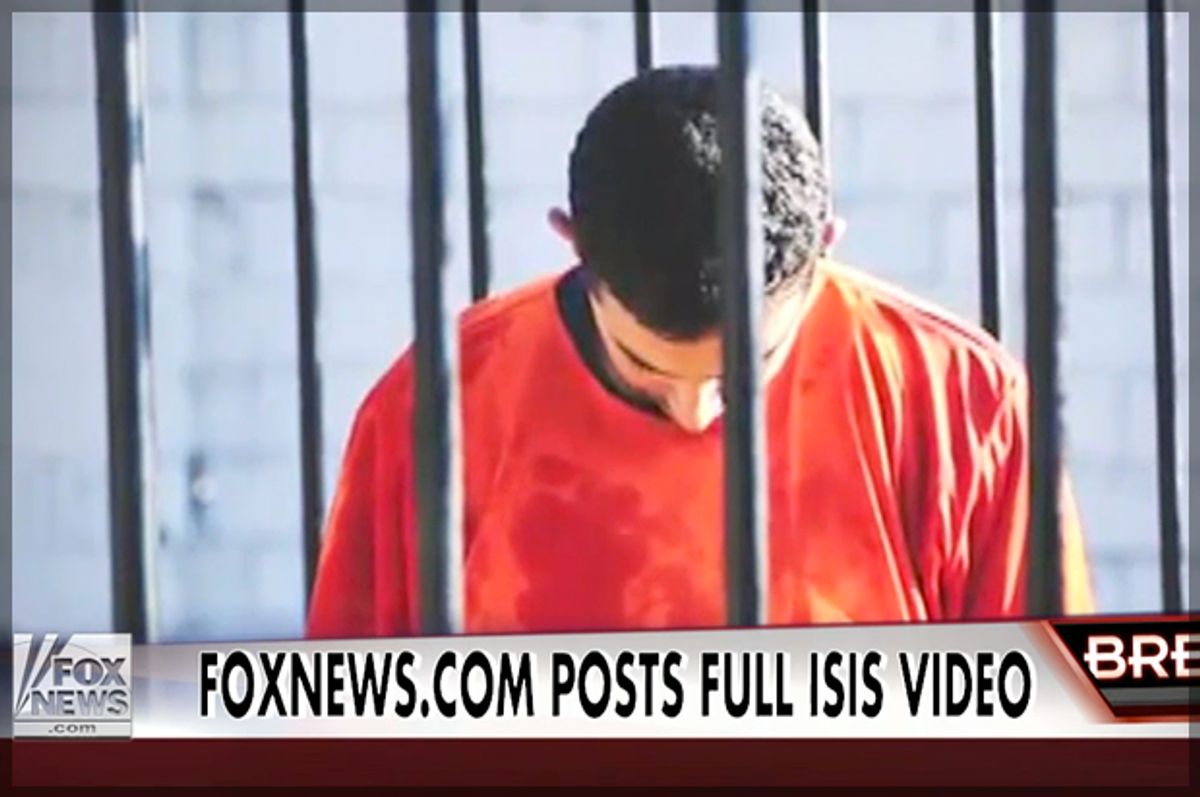 During the past nine months or so, a hideous new ritual has become an increasingly normal part of the U.S. media landscape. At least every month, and sometimes every other week, the violent extremist group most commonly known in the West as ISIS — which is right now in control of a significant chunk of eastern Syria and northern Iraq and is the target of ongoing attacks from the United States, among others — releases a new snuff film. And whenever they do, the American media disseminates the video far and wide, inadvertently helping ISIS depict itself as a fearsome and fearless global power. Whether the video is of a shooting, a decapitation or an immolation doesn’t really matter; the same process unfolds, time and time again.

The disturbing ways that such lurid, sadistic material can interact with the media’s profit motive and readers’ morbid curiosity are self-evident, and should inspire more introspection among U.S. journalists than we’ve seen so far. Less noticed but more insidious, though, is the way the process nurtures and evokes in Americans the very same reflexive, fearful, tribalist and impulsive behavior that, over the decade-plus since 9/11, has proved so hard to shake. To some degree, the undeniable nihilism and cruelty that animates ISIS would make that happen no matter what. But the media plays a crucial role here, and whenever ISIS unveils a new atrocity, the media must decide whether to make things better or worse.

On Tuesday, in response to a video released by ISIS showing the murder of a Jordanian man who was set on fire, Fox News made the conscious decision to do what the other major networks did not, and provide the full video to its audience. It was a lead that conservative blogs, which are using stories of ISIS brutality to grab cheap clicks already, soon followed. With an after-the-fact defense that highlighted so well the madness that has long felt just one terrorist attack away from rising again to dominate the American mainstream, the men and women calling the shots at Fox News made their choice. They decided to make things worse.

If you want to understand why Fox’s decision is so cynical, so irresponsible and so revealing, you should know that releasing the video wasn’t only a break from the policy followed by other media outlets. It was a break from Fox’s prior stance, too. When ISIS released video of American journalist James Foley’s murder, Fox didn’t act as a distributor for the paramilitary group. It kept the worst from the public, out of respect for Foley, his loved ones and a sense of common decency. But when ISIS’s victim was a Jordanian rather than an American — and despite the fact that his death may have been the most sadistic and gruesome ISIS has shared yet — suddenly, the calculus was different.

“I’m not going to compare two deaths under any circumstances,” John Moody, the executive vice president of Fox News, said when Andrew Kirell of Mediaite noted the inconsistency. He then went on to do just that, arguing that the Jordanian man’s murder was more newsworthy than was Foley’s. “As we’ve seen from the news reports out of Amman,” Moody said, “this [video] — more than the previous acts of ISIS — has profoundly touched the Muslim world as well as the West.” Having apparently decided that it is his job to cajole “moderates” in the Middle East to more vocally oppose the “sub-human conduct” of ISIS, Moody explained that the video has shown “where the Muslims are who condemn this.” Fox News, apparently, is the average Jordanian’s news network of choice.

In a separate statement to the media, Moody went on to mount a similarly didactic and patronizing defense of the release. “After careful consideration, we decided that giving readers of FoxNews.com the option to see for themselves the barbarity of ISIS outweighed legitimate concerns about the graphic nature of the video,” read Moody’s statement. “Online users can choose to view or not view this disturbing content,” Moody continued, as if anyone had charged Fox with forcing its audience to watch the video, and as if the only persons that mattered in the situation were Americans. The network’s Brett Baier said much the same on his television show Tuesday night, telling the viewer at home that Fox was showing an image from the video because “[w]e feel you need to see it” in order to “bring you the reality of Islamic terrorism and to label it as such.”

How a Jordanian man’s final moments of unfathomable anguish and degradation showed “the reality of Islamic terrorism” in a way the death of James Foley and ISIS’s other victims hadn’t was left unexplained. Yet it hardly mattered, because that wasn’t really the point. The real motivation behind Fox’s decision was buried at the end of Baier’s excuse, with the assertion that watching the video was necessary in order “to label [Islamic terrorism] as such.” If you’re not familiar with the talking points that currently suffuse conservative media, that probably sounds odd; since when is Fox News a fan of micromanaging others’ political language?

If you’re aware of the far right’s current obsession, however, which is criticizing President Obama for avoiding rhetoric that could strengthen ISIS’s claim to be fighting for Islam in a religious war, then Baier’s statement — and, indeed, Fox’s entire decision — falls neatly into place. As frequent Fox News guest, über-hawk and South Carolina Republican Sen. Lindsey Graham said recently on the far-right Hugh Hewitt’s radio show, conservatives have had just about enough of the president’s refusal to go along with the jihadists' view of the world as locked in an apocalyptic clash of civilizations. And as many Fox News pundits, and some likely future GOP presidential candidates, have shown, conservatives have had just about enough of the president’s unwillingness to send large numbers of American troops back to Iraq for the third time in 25 years.

And while the humanity of someone like James Foley is too precious to sacrifice in the name of traumatizing Americans in order to induce calls for more war, Fox seems to be hoping the sickening murder of a Jordanian man will do the trick. This is the moral universe in which the people running Fox reside, and I shudder to think how many lives they’d be willing to commodify in order to drag the rest of us down with them.