What the anti-vaxx backlash can teach us about climate change: We need to be way angrier

Climate change threatens kids, too -- so where's the moral outrage? 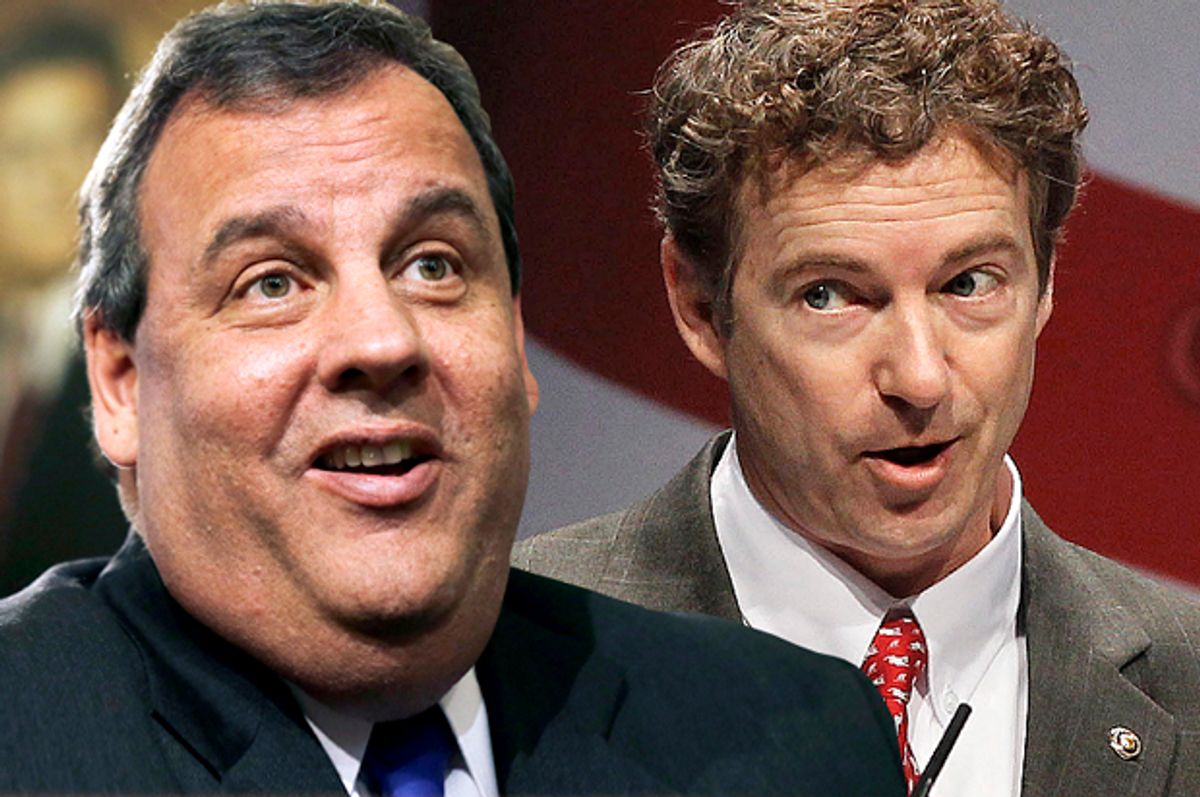 The words were barely out of the 2016 hopefuls' mouths before they were quickly made to regret them.

The backlash to comments made by Chris Christie and Rand Paul this week — suggesting that parents should be able to choose whether to vaccinate their children — was fast, furious and nearly universal, even among conservative news outlets. To wit: Fox News host Megyn Kelly stood up for “Big Brother” as a means of ensuring herd immunity. Breitbart News argued that Christie and Paul deserved the media criticism being hurled their way. And, in a stinging rebuttal, the Wall Street Journal editorial board rebuked Paul for “indulging bad science,” calling vaccination laws “a reasonable and small sacrifice of liberty to prevent the potentially fatal infection of unsuspecting infants at Disneyland.”

It was a bipartisan takedown driven not by politics, but a much deeper sense of moral outrage: that it is wrong to ignore science, and a downright crime when, in so doing, you put our children's health at risk. And as a society, we will not tolerate it.

Now, if only we could take that same outrage and channel it at climate change — and the denialists running our government.

The scientific consensus on man-made climate change, after all, is incredibly strong, and the health impacts of burning fossil fuels are undeniable. Air pollution is the "single largest environmental health risk" facing the world today, as well as a leading cause of cancer, and children are particularly vulnerable to its effects. Last June, when the EPA introduced its plan to limit pollution from coal-fired power plants, it emphasized the fact that we'd feel the benefit, first, in our lungs. Indeed, the American Lung Association predicted the rules could prevent up to 4,000 premature deaths and 100,000 asthma attacks in their first year alone. The agency took the same tack this past November when it unveiled its proposal to crack down on smog-causing ozone, arguing that the current standard of 75 parts per billion is too weak to protect public health.

Even if mitigating climate change was only a side effect of creating cleaner air, such policies would still be worth pursuing. But climate change is a public health threat in its own right, creating the conditions for new and intensified risks, many of which we’re already experiencing.

In an investigative piece for Mother Jones, David Ferry attempts to garner outrage for the plight of prisoners in California's Central Valley, thousands of whom have fallen ill from valley fever. The potentially fatal disease, contracted from fungal spores and kicked up by dust, is raging through the Southwest, fueled in part by a climate that's becoming increasingly hot and dry. "If valley fever was endemic to the hills above Rodeo Drive or the boulevards of Palo Alto and struck down Caucasians with the ferocity it lays out African Americans," Ferry charges, "it would be the kind of public health emergency that sends Anderson Cooper into the field with a face mask." And as climate change worsens, experts say, so too will the epidemic.

Then, there are the mosquitoes, which are growing in number and range where climate change leads to warmer and wetter conditions. As the insects continue to creep north, as scientists predict, the U.S. could see dengue fever epidemics of the sort that created a public health emergency in Central America last summer. (Globally, a recent study found, billions more will become newly vulnerable to the disease.) Meanwhile, other diseases Americans have barely if ever even seen before — like the painful, mosquito-born chikungunya — are posing a brand-new threat: Researchers at Yale University have warned of the potential for "a historic epidemic on U.S. shores.” And Chagas disease, which is already gaining a foothold in Texas, is similarly poised to explode. Referring to the need for expensive, long-term treatment and the disease's disproportionate effect on the poor, tropical disease experts at Baylor College of Medicine in Houston dubbed it “the new AIDS of the Americas.”

The list of climate-change threats goes on: air pollution from increased wildfires, the rising threat of waterborne illness, the health risks and hazards posed by natural disasters and the mental health impacts that can arise in their aftermath. A recent survey of members of the American Thoracic Society -- physicians who specialize in respiratory and critical care -- revealed that the majority are already seeing symptoms in their patients that they believe are linked to climate change. That includes an increase in chronic respiratory disease from air pollution, but also increases in symptoms of allergies and in injuries attributed to extreme weather.

And that's to say nothing of the threats of extreme heat, itself already the leading cause of weather-related deaths in the U.S. The National Climate Assessment warns that heat waves are projected to increase in frequency, intensity and duration, putting urban populations, and the poor in particular, at risk of death due to heat stroke, as well as cardiovascular, respiratory and cerebrovascular disease.

Over and over again, it's the most vulnerable -- children and the elderly, the sick and the immunocompromised, the poor and certain minority groups -- who get thrown under the bus when leaders ignore the risks in favor of scoring political points.

If the U.S. could get a handle on reducing greenhouse gas emissions, a recent study in the journal Climatic Change concluded, we could save between $6 billion and $14 billion in healthcare costs in 2020  -- and between $10 billion and $24 billion if we really cracked down. Climate policy, in other words, is public health policy, and ignoring the science behind the former is a direct attack on the latter. This isn't a new idea, but it's one that's failed, thus far, to trigger our primal desire to protect the commons from the anti-science antics of the few.

Why aren't we angrier? Climate change is a more abstract issue, to be sure, as well as one that lacks a clear villain -- it's easier to castigate a small group of people for threatening the larger public than to acknowledge the culpability we all share in climate change, not to mention the sacrifices we'll all have to make to address it head-on. The anti-vaxxer community may be an intractable force, but they've got nothing compared to the money and power wielded by special interests insisting that climate change is a giant hoax -- and who, in so doing, lead others to believe that the science isn't nearly as settled as it in fact is.

But where anti-vaxxers and climate deniers differ, the same logic that caused us to lash out at politicians pandering to the former should carry over to the latter. Science denial, in all its forms, has consequences. And it's about time we stopped tolerating it.