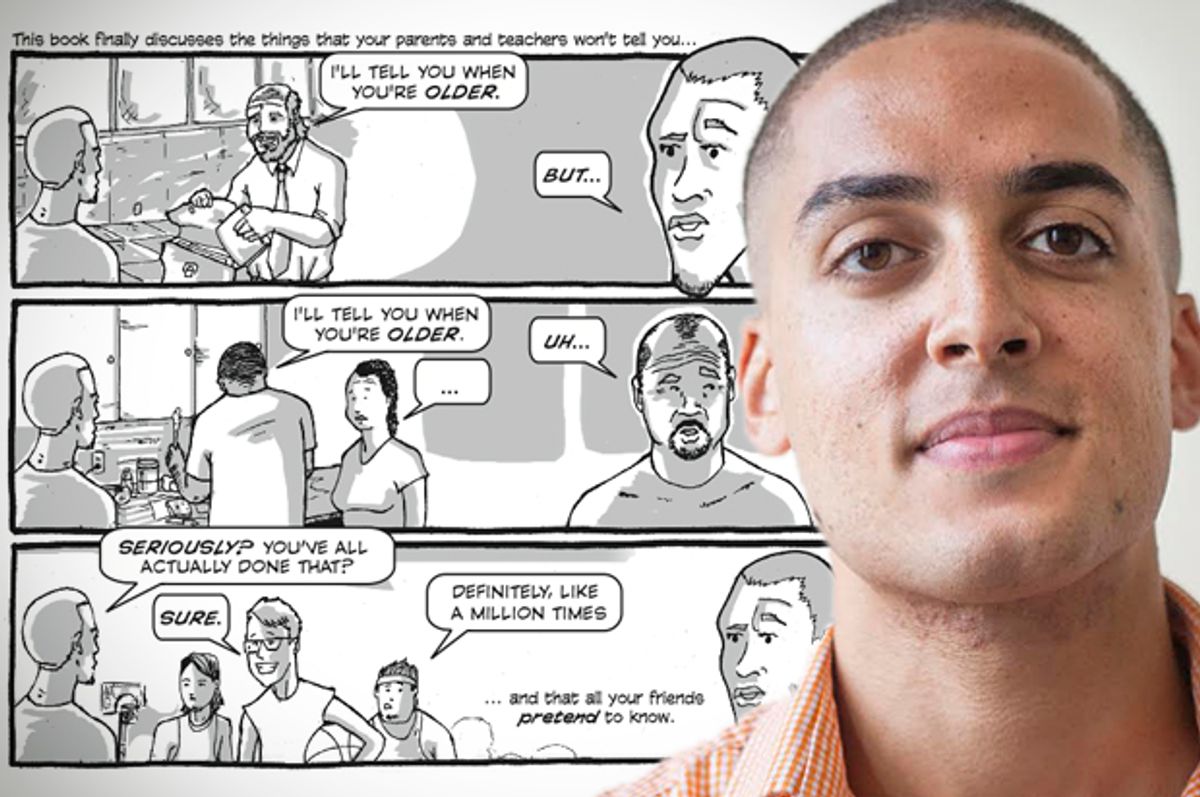 Colin Adamo, creator of the website Hooking Up & Staying Hooked (HUSH), wants to change how heterosexual teenage boys learn about sex. Namely, the 26-year-old, who helped organize Sex Week at Yale while a student there, offers the opposite of a pickup artist guide. One the website, he provides practical dating and, of course, hookup advice, such as, “Whenever you get resistance move your hand away from where it’s landed. Only touch where she wants you to and soon enough she’ll urge your hands to travel further. Try prematurely for a handful and she’ll have you put to the curb.”

Now, to reach more teenagers, he’s launched a Kickstarter campaign to fund a graphic novel, illustrated by James Gilmer, that he plans to distribute free online in early 2016. While the website is a factual resource, Adam told Salon of his planned project, “the graphic novel literally illustrates what it would look like for a reader to navigate the world of dating, relationships and sexual decision making in high school. The illustrated pages will follow multiple characters as they improve themselves, initiate and build healthy relationships, make decisions about sex, and grapple with conflict.” We emailed with Adamo about what was missing from his sex education, the role of pornography in teens’ introduction to sex and why “do the right thing” isn’t the right message.

What kind of sex education did you get as a teenager? What was missing from it?

I was lucky enough to grow up in a state that took sex ed relatively seriously. In my suburban town in New Jersey we got a healthy mix of contraception and abstinence, a decent discussion of STDs, and a weird encouragement for marriage — about as good as you can ask for in America right now. The only formal talking to about sex I got from my parents was a very firm “Not in my damn house” from my mother during the drive to school one morning.

The unfortunate reality of growing up as a guy in a world that is so hyper-sexualized and intent on objectifying women’s bodies is that so many peers and mentors who might mean well convey an emphasis on the physical acts of sex. What was missing was any useful information or guidance around relationships. It seemed odd to me [so often] other people acknowledged that sexual activity was taking place in the context of some form of a relationship between two people, but no one ever mentioned what that relationship looked like, what it needed to be healthy or enjoyable, or how to make yourself and someone else happy within one of them.

You've taught sexuality health education in urban public schools; what are the most common questions you've gotten from students? Where are they mainly getting their information?

What makes providing young people with quality information about sex and relationships difficult is that they are currently receiving information from everywhere. If you want a young person to learn about trigonometry, their trigonometry teacher is probably the only one helping them understand what this concept means and how to master it. When it comes to sex, young people are bombarded with contrasting values, messages, statistics, pseudo-science and medical information, all of which is usually presented with some sort of motive.

This always struck me as evidence that what was missing from all of our lessons, as well as from our nation’s educational institutions, was information on interpersonal interaction. Understanding the importance of condoms, consent, or STI status is crucial, but if you can’t put any of that into action by communicating with a partner, than how useful is anything you’ve learned about sex?

What is the main thing you see as missing from most sex advice for straight teen boys?

In sex ed we simply ask young people to always do the “right” thing simply because it’s the “right” thing to do. If you’ve ever failed to recycle, wear a seatbelt, or floss before bed, you know personally this is not the way we as human beings manage our own behavior.

When it comes to teaching young men to respect women or make responsible decisions about sex, other resources fail to address the extremely complex milieu young men are acting in. When we ask them to do the “right” thing, often this goes against dominant norms of what it means to be a man or young or both. I want young men to be respectful and responsible but I want to help them figure out what that might look like in their lives. If we merely demand better of young men without helping them make sense of the competing forces that influence their behavior, their failure to do better is on us.

Why did you decide to use the graphic novel format for HUSH?

First, with a narrative that is visually represented, we have the opportunity to contextualize our information and advice even further. Readers get the chance to see what all of this looks like played out on the page. The artwork, the story and the presentation are all reason enough to engage with this resource or share it with a friend. We believe this will provide a reason to read this guide to guys who might not have sought out this info on their own.

Why is the focus only on straight teens?

Part of my focus on straight guys is just writing about what you know. What gives the current guide a leg up is that I understand what it means to put all of this information into action. Having grown up as a straight cis guy in high school, I don’t think it’s my place to pretend I know what it means to face the challenges that young LGBTQ people do.

But what drove me to create this resource in the first place was that I didn’t see anything out there that was speaking to young straight men. They’re at the intersection of so many issues we’re trying to address in the fight for sexual health, gender equity and LGBTQ rights. Young straight men are usually involved in one way or another in matters of unplanned pregnancy, STI transmission, sexual assault, dating violence, or homophobic/transphobic bullying. While there were a number of resources that I could point to that were specific to young straight women or queer youth, I hadn’t seen anything that was built for straight guys. If no one is speaking to young straight men directly about these issues it is too easy for them to ignore the importance of their role in the movement.

I want to provide men with the tools to think critically about the type of person they want to be, the pressures they might face, the desires they might feel, the decisions they make, and the consequences of those decisions when it comes to sex and relationships. Because of porn’s ubiquity today, it’s hard to untangle it from the sexuality of any digitally connected young person. The goal remains the same: figure out what we need to do to prepare guys to think critically and act responsibly in their relationship to pornography.

Though HUSH is geared toward young men, would you say it's a feminist project? What impact do you hope it will have on straight teen girls' relationships?

I absolutely see this project as feminist influenced. This guide is built to help guys be more communicative, respectful and responsible in their romantic and sexual relationships with women. If young men are prepared to communicate about needs and boundaries, young women will see the benefits just as much as the boys.

What I hope HUSH can accomplish is to alleviate the insecurity young men sometimes feel when approaching dating or hooking up. Our culture expects young men to be competent and competitive, yet provides them with poor examples and unhealthy beliefs about how to treat women or build strong relationships. When guys are ill-equipped to navigate these complicated issues, it might be expected that they’d make harmful choices. I want them to feel prepared for success in their interactions with women.