I thought our story was as epic as the Colleen McCullough romance. It took a while to discover it was a nightmare 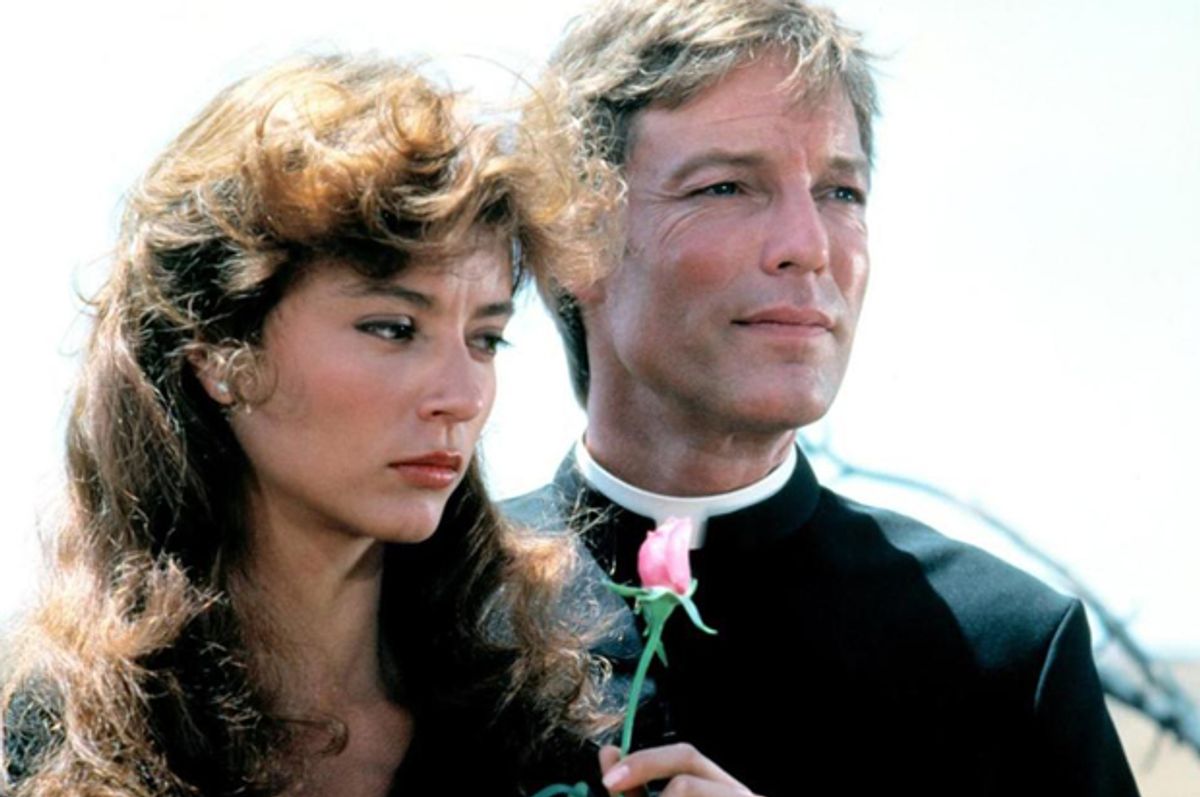 Rachel Ward and Richard Chamberlain in "The Thorn Birds" (ABC)
--

I felt a small tug of personal loss when author Colleen McCullough passed away last week. She was the author of a book that, in some ways, read like the story of my life. I fell in love with my priest and later married him — the same torrid forbidden love story that fuels McCullough’s classic novel. But in other ways, my story was nothing like that romance. It was more like a nightmare.

I was in the middle of a breakup from an abusive, drug-addicted boyfriend when I first went to Father W — for counseling. He was the most caring, compassionate man in the world. He was so tender, so concerned, and our intimate nightly telephone talks quickly became the highlight of my day. I was in the process of joining the church through the adult conversion program, and in my weekly class, I saw how beloved he was by the community. How powerful. I prayed daily my thanksgiving for such a wonderful priest.

In our evening calls, he revealed to me that he cared for me more than I could ever know. After the abuse and horror of my recent relationship, such kindness was irresistible. We went for dinner one night and ended up in the rectory, passionately making out. We continued to speak or see each other often, pushing boundaries further, until the very night I was welcomed into the church at Easter. After giving me my First Communion, he took me into his private rooms in the rectory and we made love.

Then the full-fledged affair began. He came over every night, staying later each time, until he was creeping away at dawn. When I wondered about the future of the relationship, and how guilty I felt, he made me promise to love only him, and to recite the wedding vows with him one night to bind us. He told me afterward that we were both technically excommunicated by that private act – but that our love was bigger than the church or any rules of mankind. It was something God had given us. It was, as if by McCullough’s own pen, our own “Thorn Birds” story.

Of course, we were discovered. The bishop heard rumors, confronted Father W —. He was moved from my parish to another church in another town but continued to drive back to my apartment to stay all night anyway. He eventually took a leave of absence and looked for a job in the private sector. As soon as he found it, he left the priesthood.

The bishop thundered. My priest’s mother freaked out. The diocese and the brotherhood of priests burned with gossip. My parents remained philosophical -- because even a fallen priest was better than a drug-addled bully. We married almost immediately, with a secret wedding license so it wouldn’t appear in the newspaper. And we went to a different church -- still Catholic, but we sat at the back, hoping not to be recognized.

My new mother-in-law didn’t make eye contact with me for well over a year. I had ruined her chances at the honor and glory that the mother of a priest enjoys. She was shamed by our selfishness. And she did not hesitate to shake her finger in my face, hissing, “I knew it was a woman!” Priest friends came to visit our little apartment and told us how hard our lives would be. And, not for the first time, they called our love “The Thorn Birds.” All the drama was bearable because our love was the greatest story ever told.

We struggled in those first few years – with finances, with skulking around and learning to be married with the shadow of shame over our heads. I had a miscarriage, I quit my job, and we moved in with his mother – which worked as well as you can imagine. I had two babies in rapid succession (good Catholics don’t use birth control). And we tried to find a way to worship and to celebrate our Catholic faith, but it was in such opposition to how the church worked in the real world.

On Easter, we kindled a fire in the backyard and my husband, wearing his priestly garments, blessed wafer and wine, and the two of us celebrated our own Mass in the firelight while the babies slept. We heard about married priest advocacy groups and got involved. “The law of celibacy for priests is holding the church back,” we said. “St. Peter was married! Jesus may have been married! This is about keeping property in the church! About controlling priests’ libidos, their lives, with arcane rules!” We were vocal and political, fighting for our right to exist as a married priest and his wife. It was a struggle as powerful and romantic as anything in “The Thorn Birds.”

But, as it turns out, our story was also fiction.

It took some years for me to see it, but my husband had a drinking problem. An I’m-fine-all-day-but-I-pass-out-every-night kind of problem. An I-say-things-I-don’t-really-mean, except-I-really-mean-it problem. I was busy with Brownies and PTA, cutting coupons and trying to placate or nurse my bitter mother-in-law. When he was drinking, he said things that puzzled me at first, then alarmed me, then, slowly, turned our marriage into a sham. He commented favorably on handsome men in commercials. He liked certain pop-culture figures known to be gay icons. He got very excited about some new neighbors who were young and sexy, and he said he’d like to fuck them all.

After 10 years of being married to a holy, pious ex-priest, I found myself married to an increasingly belligerent alcoholic who was, it was pretty clear, revealing his closeted homosexuality. There were so many layers to this convoluted relationship that it took me about three years to fully extricate myself, and it was ugly, dangerous and spiteful. Underneath the layers of religiosity and sexual predation, underneath the unchecked alcoholism and increasing misogyny was a man afraid to be himself, who would do anything to avoid it -- and I couldn’t stay and raise my daughters while married to that man. I was the beard, after all those years -- and our romantic story turned out to be woven of lies and shadows. So I divorced my priest, and we went our separate ways.

Immediately afterward, he came out and lived as a gay man for several years. Then he closeted that side of his life again and married another woman, and they seem happy now. I couldn’t say.

I don’t claim to be his victim. I walked into the illicit relationship and the forbidden marriage with my eyes as open as they could be for a damaged, abused woman. I was blind enough, and he hid it well enough in the beginning, so it took a long time to see where we really were. Mine was not a story of epic romance. Mine was a story of survival.

Catherine Crum is the pseudonym for a freelance writer. Names were changed to protect those involved.