You know about Clinton and JFK, but what about Grover Cleveland? A tawdry history of White House affairs 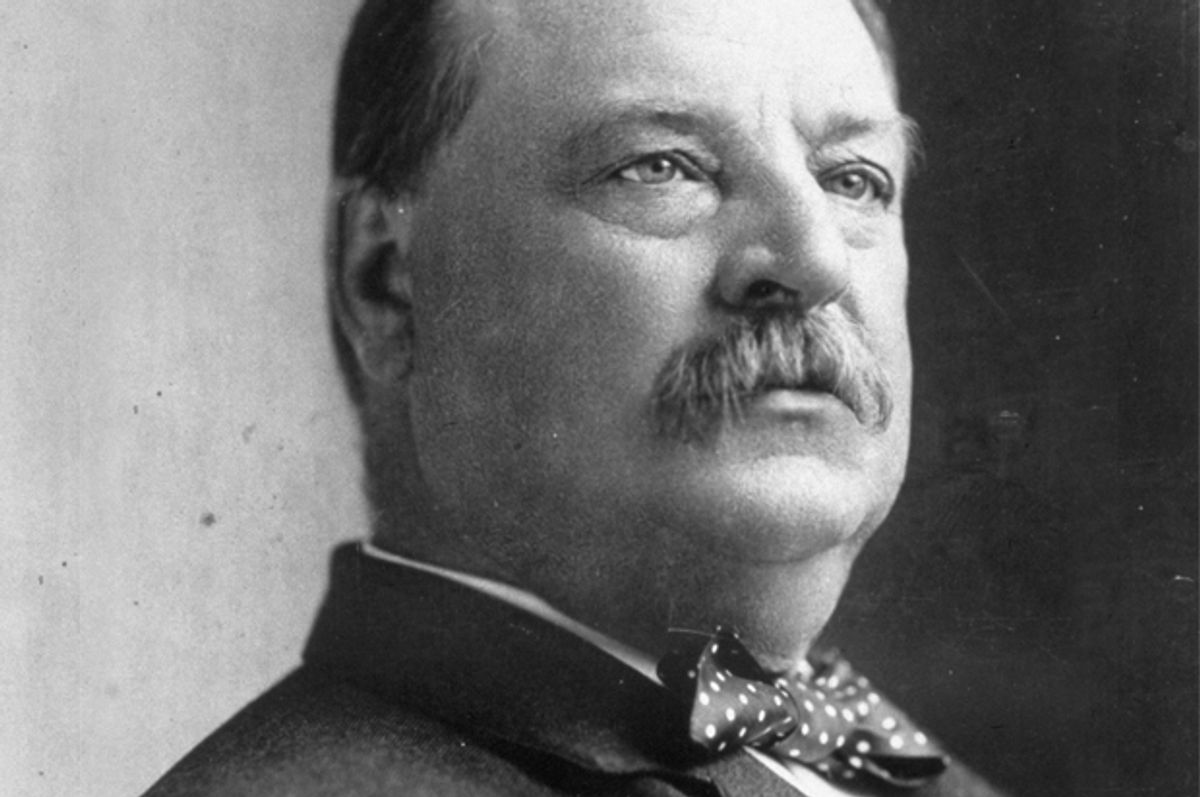 Before 1988, when presidential contender Gary Hart was brought down by the media for a sex scandal, the private lives of politicians and presidents were considered just that: private. Hart dared the press to follow him, and they did—all the way to a pleasure cruise aboard the Monkey Business and a picture of pretty Donna Rice sitting on Hart's lap. Hart’s travails, and this turning point in American media and politics, are detailed in Matt Bai’s surprisingly sympathetic portrait, All the Truth Is Out. In Bai’s telling, Hart, who never held political office again, wasn’t the only loser in the deal. Politicians have been stalked ever since the new era of gossipy, “gotcha” political journalism was born.

Bill Clinton's missteps became topics of discussion in households all over the country. Politics was never so icky ... or interesting. The sex lives of our political leaders may have no bearing on their abilities to perform their jobs, but they sell a lot of newspapers and popular books.

Because of the antics of Hart and Clinton, we can be sure that, abilities be damned, no politician today gets a free pass with any sexual skeletons hiding in the closet. Just ask John Edwards. Long before Hart and Clinton, there were ample examples of leaders who, if they held office today, would have made for some sensational copy. Here are seven of the most notable.

The list of extramarital dalliances in John F. Kennedy’s black book is impressive: Marilyn Monroe, Angie Dickinson and Blaze Starr. Frank Sinatra, leader of the Rat Pack and a strong Kennedy supporter, fed the president a constant stream of pretty paramours. But JFK wasn’t only interested in glamorous women. His own White House secretaries, Priscilla Weir and Jill Cowan (referred to as Fiddle and Faddle behind the scenes), were among his bedmates. Most intriguing was his affair with Judith Exner Campbell, a fetching beauty who also happened to be sleeping with mob boss Sam Giancana at the same time. (Conspiracy theorists have zeroed in on this triangle as evidence that the mob was involved in Kennedy’s murder in 1963.) J. Edgar Hoover, the ruthless head of the FBI, used his knowledge of the president’s infidelities to keep JFK in line and make sure that whatever Hoover wanted, Hoover got. Some apologists for Kennedy’s behavior have pointed to the medication JFK took for his Addison’s disease as the cause of his relentless hound-dogging. Despite the fact that the press was certainly aware of his escapades, it remained silent on the subject.

An openly gay president would generate headlines, although one hopes that in today’s more tolerant America, it wouldn’t be considered scandalous. But roughly 1 in 35 adult Americans identify as gay, and we’ve had 44 presidents ... you do the math. In all likelihood we have had our first gay president, and unfortunately for the gay community, it’s James Buchanan, 15th president of the United States, and number one on many a list of worst presidents ever. A practitioner of “do nothing and maybe it will go away” style of leadership, Buchanan presided over the country as it slid into civil war (while arguing that secession of states was illegal, he also proclaimed that going to war against them was illegal). The country’s only lifelong bachelor president, Buchanan was not without a partner. He lived with William Rufus King, a former vice-president under Millard Fillmore, for 10 years. Buchanan and King were apparently the talk of the town. Andrew Jackson referred to them as Miss Nancy and Aunt Fancy (a term at the time for a man with effeminate qualities). Others referred to King as Buchanan’s “better half,” and in a letter to former president James Polk’s wife, King was referred to as Buchanan’s “wife…rigged out in her best clothes.”

The second candidate for first gay prez is decidedly more illustrious. In a 2005 book, The Intimate World of Abraham Lincoln, C.A. Tripp proposes that Honest Abe wasn’t totally honest about his sexuality. Citing the fact that Lincoln often shared a bed with men while traveling (a fairly common 19th-century practice) and drawing on Lincoln biographer Carl Sandburg’s description of Abe as having "a streak of lavender and soft spots as May violets," Tripp alleged that Lincoln’s fondness for men went beyond bonhomie. Most Lincoln biographers dismiss Tripp as mistaken, so Buchanan remains the front-runner.

Grover Cleveland had a reputation for being quite the ladies man. While practicing law in Buffalo, New York, Cleveland had a romance with a young woman named Maria Crofts Halpin. Years later, Halpin accused Cleveland of fathering her son, Oscar. Cleveland did not deny it, and while never admitting paternity, did send her child support. When he ran for president in 1884, that dalliance came back to bite him, as his opponents rallied around the slogan, “Ma ma, where’s my pa, gone to the White House, ha ha ha.” Still, Cleveland prevailed in the election to become president (an office he lost in the subsequent election, and then regained in 1892).

As an aside, Rose Cleveland, Grover’s “spinster” sister served as First Lady to the bachelor president until Cleveland married in 1886. During that time, Rose began a friendship with a married woman named Evangeline Simpson. In letters that later came to light, Simpson breathlessly refers to Rose as, "my Clevy, my Viking, my Everything." Rose in return writes, “I dare not think of your arms,” and “I tremble at the thought of you.” After Simpson’s husband died, Evangeline and Rose moved to Italy, where they lived together until Cleveland died in 1918.

FDR’s paralysis, caused by the polio he contracted as a young man, was no impediment to his desires. Roosevelt had a lifelong affair with Lucy Mercer, his wife’s social secretary. The affair probably began in 1916 (before FDR’s polio struck in 1921), while Roosevelt was serving as Assistant Secretary of the Navy, with Eleanor and their children away for the summer. A couple of years later, Eleanor happened upon some steamy letters between her husband and Lucy. Threatening divorce (which would have ruined Roosevelt politically), Eleanor remained FDR’s partner if not lover. Undaunted, FDR continued his relationship with Mercer until his death in 1945 (Mercer was actually with the president when he died.) Other rumored affairs included his secretary, Missy LeHand, and another with the Crown Princess Marta of Norway. Not to be outdone, Eleanor had her own extracurricular activities to keep her busy, not least of which were probable affairs with Nancy Cook, Marion Dickerman and Lorena Hickok.

Lyndon Baines Johnson competed with John Kennedy in realms beyond politics. Referring to JFK’s sexual voraciousness, LBJ once claimed, "I have had more women by accident than he has had on purpose." It might have actually been true. A woman named Madeline Brown claimed to have had a 20-year affair with Johnson, which she said was purely physical, and produced, she says, her son. If so, LBJ was working her on the side, as he also, according to Johnson biographer Robert Caro, was conducting a 30-year affair with a woman named Alice Glass, beginning in 1937. Alice was the wife of a newspaper magnate who owned papers that strongly supported Johnson. The affair ended in 1967, apparently because Alice was vehemently antiwar. It seems the war ruined more than Johnson’s political career.

Warren Harding’s administration was riddled with corruption, bribery and general ineptness. Though immensely popular with the electorate, he was a terrible president. It didn’t matter to him though, as he was busy carrying on with various women in the White House closet. Besides a long affair with Carrie Fulton Phillips, the wife of his friend James Phillips, Harding was also having his way with Nan Britton, a woman 30 years younger than him. That affair produced an illegitimate daughter. Florence Harding was not unaware of her husband’s shenanigans, and when Harding died, in office, in 1923 from a case of ptomaine poisoning (probably contracted from eating contaminated crabmeat), rumors circulated that it was Florence herself who poisoned the President.

Author of the Declaration of Independence, third President of the United States, architect, philosopher, and man of enlightenment, Thomas Jefferson was rumored as a young man to have tried to seduce his best friend’s wife, Betsy Walker. In Paris, as America’s ambassador to France, he had an affair with a married woman, Maria Cosway. Jefferson also shared his bed with his half-black slave, Sally Hemings. Even more scandalous, Hemings was actually the half-sister of Jefferson’s wife, Martha who shared the same father as Sally. Jefferson had a long relationship with Hemings, fathering six children and taking her everywhere he went, including Paris (where presumably he was involved with both Cosway and Sally). Four of their children, all said to be of light complexion, survived to adulthood, and were freed by Jefferson. Oddly, Jefferson never granted Sally Hemings her freedom, which was left for Jefferson’s daughter Martha Randolph to grant after her father’s death.

Andrew Jackson: He married his wife Rachel before she was actually divorced from her first husband, making him the first president married to a bigamist.

Ronald Reagan: According to unauthorized biographer Kitty Kelley, Reagan was accused of raping a woman in 1952, when he was serving as president of the Screen Actors Guild. Kelley also claims Reagan’s wife Nancy had an affair with Frank Sinatra.

Bush 41 and Bush 43: Both father and son were rumored to have had extramarital affairs. 41’s alleged affairs occurred both before and during his administration. 43, keeping in step with his ragged reputation, allegedly had an affair with a stripper. Both Bushes denied the rumors and the stories gained no political traction. 43 was also accused of rape in October 2000 by a woman named Margie Denise Schoedinger, who later died of a self-inflicted gunshot wound in 2003.