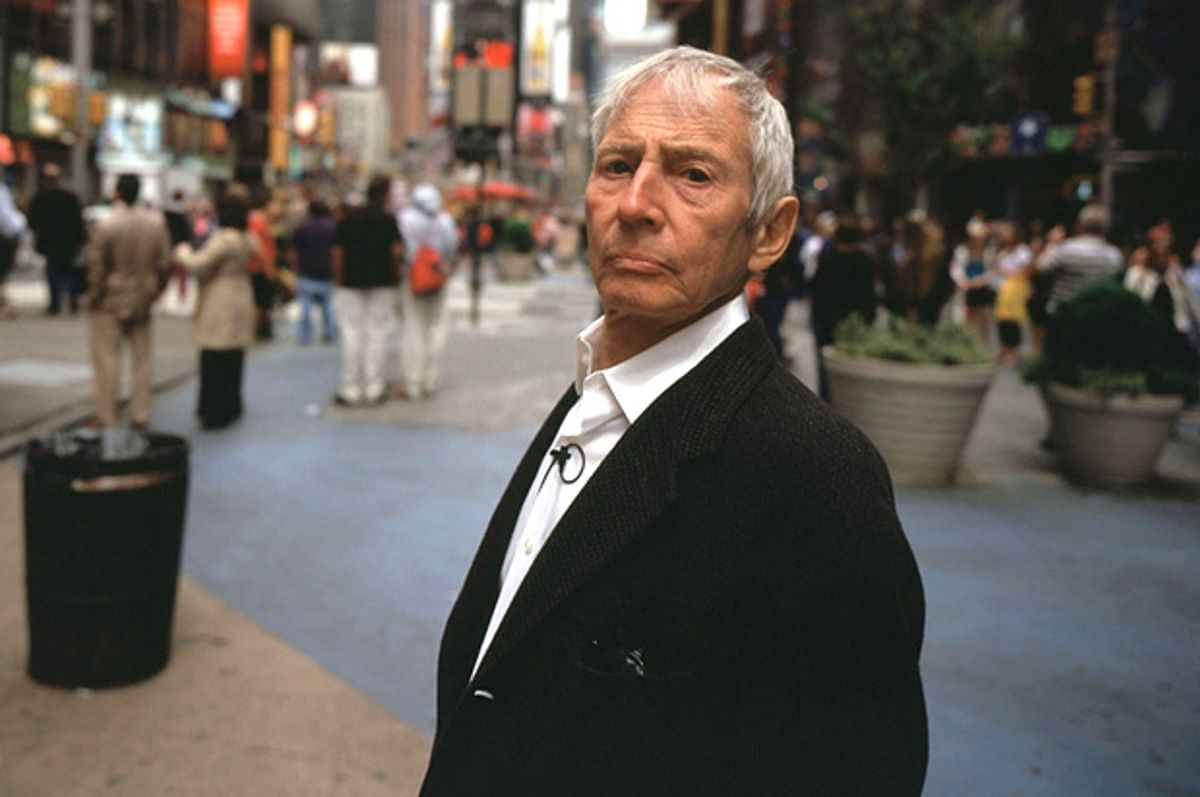 The first episode of “The Jinx” starts with the discovery of a gruesomely dismembered body off the coast of Galveston, Texas. It has the shape and feel, at first, of many other true-crime stories—indeed, set as it is on the Gulf Coast, it has a whiff of the meditative investigation and rural mystery of “True Detective.” The investigators sport cowboy hats and bristle-brush mustaches. It feels more like a news network’s salacious prime-time programming than an HBO documentary.

But then things start deviating from the script: The murdered party’s upstairs neighbor is a mute woman. She is described as “ugly.” A man is found picking up a prescription found in her apartment. The man flees. The man walks into a Wegman’s in Pennsylvania and tries to steal a hoagie, despite having more than $500 in his pocket and $38,000 in the car. And the man, whose name is Robert Durst, insists he has done nothing wrong.

Is Robert Durst jinxed? The possibility is where HBO’s six-part documentary series, debuting Sunday night, gets its name. The wealthy scion of a New York City real estate mogul, Durst has been linked to three different unsolved cases—the 1982 disappearance of his wife in New York, the murder of a journalist in Beverly Hills in 2000, and, most recently, the 2001 murder and dismemberment of an elderly man in Galveston. He has only been charged once, for the Texas murder; he was acquitted. Today, Durst walks free, albeit with some limitations on his movement. “The Jinx” is an attempt to tell the story of this man and the mysteries surrounding him—it’s subtitled “The Life and Deaths of Robert Durst”—with one major trump card: Durst himself, who sat down with director Andrew Jarecki for a face-to-face interview.

Jarecki is best known for the critically acclaimed 2003 documentary “Capturing the Friedmans,” also produced by HBO, which examined the case of a father and son both being arrested for child molestation and eventually pleading guilty. It’s a chilling documentary—not just because of the nature of the crimes, but because of how difficult it becomes to pin down any one truth about the guilt or innocence of these men. Stories conflict; testimony is tampered with; home video is excavated and examined. The viewer doesn’t leave “Capturing the Friedmans” thinking that justice has been served; the viewer leaves wondering if anything they’ve just seen is real.

“The Jinx” is Jarecki’s attempt to do something similar for the case of Robert Durst—a man who displays breathtaking arrogance and self-delusion along with real pain and confusion. In one of the oddest twists of the story, Durst actually came to Jarecki with his story, instead of the other way around. Jarecki produced a feature film based on Kathleen Durst’s disappearance in 1982, and in an interview clip included in “The Jinx,” he says his mission was to create a story that Robert Durst himself would have an emotional reaction to. Apparently, on some level, he succeeded. Durst called Jarecki and offered him not just an interview, but the interview—exclusive access and full cooperation.

It takes “The Jinx” until the second episode to even start talking to Durst—first, we hear from others what he is presumed or accused of being. We are told how, years after his wife Kathleen’s disappearance, Durst showed up on the dock behind their old house, staring out into the lake. We learn that Durst’s brother, Douglas Durst, who is the heir to most of his father’s business, has hired a bodyguard to protect himself from Robert.

When Jarecki sits down to question Durst, then, what follows is a face-off of increasingly epic proportions—the type of interview that has its roots in “The Fog of War,” where Errol Morris interviewed Robert MacNamara on the Vietnam War. Jarecki doesn’t just pose questions; he waits for Durst to answer, and the camera watches as Durst’s face slides in and out of micro-expressions, pausing inopportunely, blinking sympathetically. At times he seems completely trustworthy. At others, he seems like a coldblooded murderer. The case keeps getting harder and harder to understand; by the end of the two episodes HBO sent out to critics, it seems entirely plausible that Durst is both innocent and guilty, at the same time.

“The Jinx” can be a tad too self-referential at times, and unlike the hot-blooded thrill of the podcast “Serial,” this is a story whose particulars can all be found—albeit presented far less well—on Wikipedia. But it’s absorbing, due to the exhaustive research underpinning it and the hook of Durst’s actual, shiftless presence. As with any good murder mystery, the end is going to indicate a lot of how good the whole story is, and there are elements of “The Jinx” that could go either way. But it is one of those series that makes me want to watch all the way through to see not just what happens at the end—which is already obvious in the first episode—but rather, how it happens; how Durst jinxed himself, and/or jinxed everyone around him.