Yes, we're stuck with Hillary: But we don't need an Elizabeth Warren-esque savior for a battle of ideas

Republicans will have a real debate over ideas heading into 2016. Progressives won't -- unless we build a movement 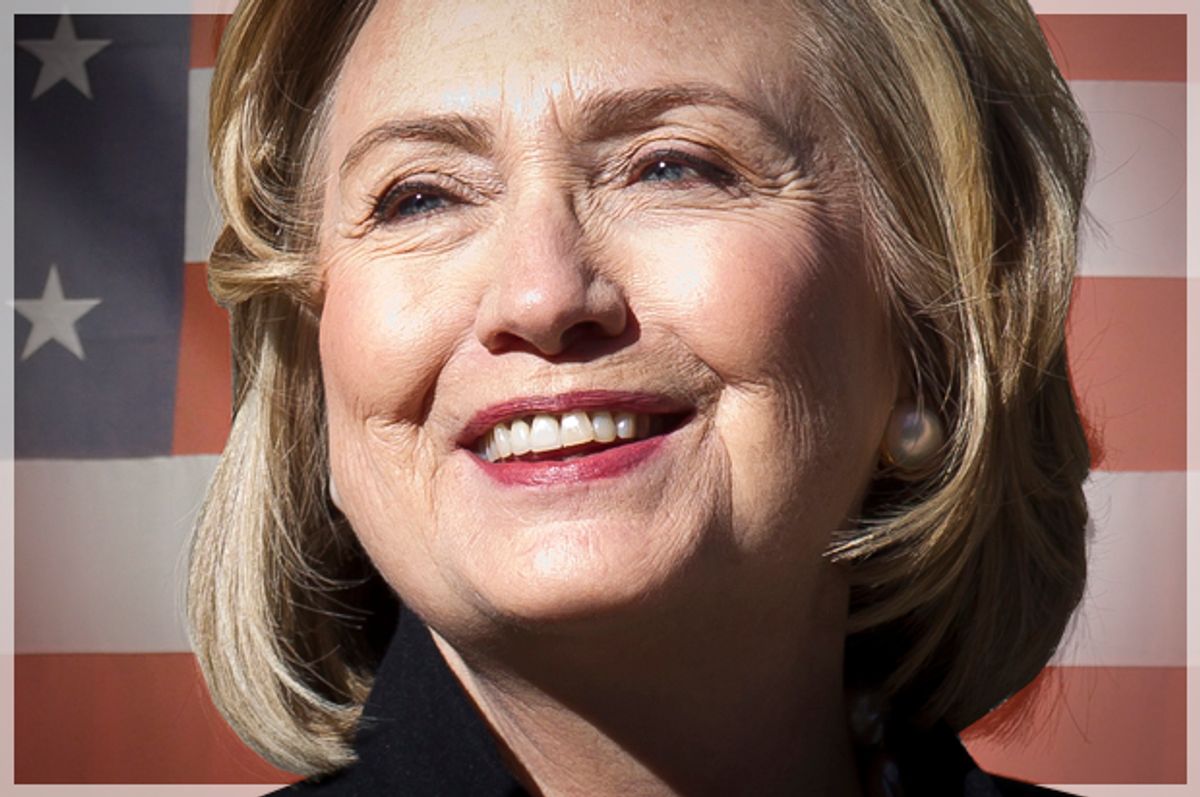 Take a moment to ponder our major parties at the dawn of the 2016 presidential election. The GOP race is as crazy and crowded as a Black Friday at Wal-Mart, while the Democrats’ contest is, to quote Leonard Cohen, as dead as heaven on a Saturday night. It’s only partly due to their very different circumstances.

Hillary Clinton’s lead within her party bests that of any non-incumbent since Dwight Eisenhower, and maybe ever. Her Democratic support tops off at over 60 percent; her toughest opponents barely crack double digits. In a Fox News poll, Jeb Bush squeaks past Rand Paul by 15 percent to 13 percent.

If Hillary’s crowned, too bad for her. She’s caked in rust. She botched last year’s rollout of her latest memoir, as when she told Diane Sawyer she and Bill left the White House “dead broke.” When Jon Stewart asked her how she’d fix foreign policy she replied, “We have not been telling our story... we did a much better job back in the Cold War.” Translation: a little programming upgrade for Radio Free Europe and we’re fine. By the end she’d made history: the first candidate ever to lose a book tour.

The difference between the parties goes way beyond the relative size and strength of their fields. Republicans are now in their fourth decade of an often bitter and very public war over ideas. It’s led by think tanks and wealthy funders—yes, the Kochs—but lately two leading presidential candidates, Bush and Paul, have been in the thick of the fight.

Democrats don’t engage in that kind of public debate, not even after a public whipping. Their think tanks are fewer in number and not nearly as well-funded. Those they have enjoy less status within their party and less access to its leaders, who’d rather spend their time and money kibitzing with pollsters and media consultants about "message."

It’s what Hillary’s doing now. Her advisers think by laying low she avoids risk, but it leaves a poor impression. While Jeb Bush appears focused on America’s future, she seems focused on her future. It may not be fair to her but it’s fair comment on the two parties’ very different styles. Yes, Republicans have more rich guys and probably pay their pollsters more money, but they also have real debates. One may ask why Democrats don’t, or if they ever will.

The first question’s easy. Democrats don’t debate policy because they can’t. They can’t because they tell their donors one thing and their base another. This divides policy from message. It’s a situation rich with irony: To pay for populist-themed ads they mortgage themselves to the status quo. Needless to say, when they divvy up the spoils, the donors get policy and the base gets message.

Democrats hate to hear it, but that’s how it went down in 2008. Obama ran on cleaning up Washington and Wall Street, rescuing homeowners, raising the minimum wage and passing a public option. We know what happened next.  The homeowners got the ax. The minimum wage, the public option and the ethics reforms got shelved. Wall Street got a get-out-of-jail-free card.

Obama's defenders say he wanted to do right but Republicans blocked him. I believe he had more leeway than he perhaps wisely let on. (If the public option dies, better the base blames the other side.) But even so, who’s to say if he chose out of preference or perceived necessity? No one has to, because the real problem isn’t him, it’s the system.

By "the system," I don’t mean the whole democracy. I mean the system Democrats regard as inevitable, but which they in fact choose: the system of big money and empty ads; of consultants tied to big business; of elites who manipulate rather than engage the base. It’s the world in which Hillary’s now sequestered and in which she, Obama and most top Democrats have spent their lives.

We can change the system but only if we admit two things. One is that it won’t change itself. The other is that we don’t need it; indeed, we are far better off without it. These are hard truths for insiders to swallow. But progressives are outsiders and many of them don’t believe this, either.

Listening to Obama's State of the Union, many liberals fell in love all over again. Hailed as a populist manifesto, it was a sharp turn for a guy who after six years of abuse still bleats on about bipartisanship. Some say the "liberating" midterm defeat changed Obama. I’d wager not, but it doesn’t matter. The system has to change and it barely even tries.

As Obama wrestles with Congress, Democratic candidates dial for dollars or hobnob with consultants. All give rousing populist speeches. Most then seek out quiet places where they can safely whisper to their donors. They’ve been at it so long it doesn’t feel like lying, but if cognitive dissonance were a fatal disease they’d all be dead by morning.

The advice Democrats get from consultants is killing them but they don’t know it. America needs broad reform to solve problems that affect us all. Consultants micro-target niche constituencies. It turns out you can’t sell big changes with mere slogans. Real reformers must marshal facts and apply logic to sway opinion. Political consultants are in a different line of work.

Progressives waiting for Democrats to change are dangerously deluded. It hurts to admit that their leaders are addicted to money and to the sense of emotional security consultants provide in lieu of insight -- and worse, they can't see it or change.

The midterm elections showed just how poorly the Democrats’ business model is working for them. Our entire political debate attests to it. I said last week that the public is growing more progressive. A right-leaning reader wrote in to ask if I’d heard about the election. I did, which is why I didn’t say people are growing more Democratic, just more progressive.

Democrats see this well enough to hop on the populist bandwagon. Even Republicans are climbing on board, not knowing what else to do. The issues on which they built their careers crumble about them. Ten years ago they ran anti-gay marriage referenda to gin up voter turnout. Now most avoid the topic. Two years ago they dismissed income inequality. Now they shed crocodile tears over wage stagnation. One year ago they were climate-change deniers; then they just weren’t scientists. Now they don’t want to talk about that either.

In December, Republicans went shilling for the fossil-fuel industry but hid the deed in the budget bill. (Obama foolishly accommodated them.)  They appease their base attacking Obama’s immigration policy but focus on his alleged abuse of his executive authority.  They’ll fight to defend their prize donors’ tax breaks but pray they aren’t caught doing it.

Their cultural "populism" is as obsolete as their laissez-faire economic doctrines. With each passing day, racial politics is a more dangerous game to play. Patriarchy is on its way out the door. They can block gun control but most Americans back every sensible reform before Congress. As for foreign policy, they can still bang the drum for bloated Pentagon budgets but their war hawks now divide even their own party.

It’s why Democrats who just got trounced came back to town with more to say. It’s why Obama could seize so many initiatives and deliver the strongest speech we’ve heard in a long time. Republicans are back to repealing Obamacare. They do it to for their base and because they don’t know what else to do. They’ll deny it, but the smart ones get it.

So how could we be losing to these guys? The biggest reason is a system that binds Democrats to the status quo; that teaches them to spout empty phrases; that wastes their time raising money behind closed doors when they ought to be out in public learning and debating new ideas. All say they want to do just that but can’t. They are trapped in a fear-based system they resent but don’t dare question and aren’t about to change.

Many progressives have already signed onto a 2016 campaign. Elizabeth Warren’s is the most popular, even though it doesn’t actually exist. The Draft Warren movement is growing. She says she’s not a candidate but won’t budge from the present participle—I’m not running—which only fans the flames of the draft. I could be wrong but I take her to mean she’ll run only if Hillary were to stumble badly, then she’d jump right in.

Some progressives imagine Warren will allow the draft to go on—for it to work she does have to allow it— all the way to Iowa. She may even imagine it but it would be one sticky wicket to get through. Others hope Bernie Sanders proves a better messenger than Dennis Kucinich or at least gets a fairer hearing.

I don’t doubt Warren would light a fire under a movement—she’s done it before—but two things worry me about all such scenarios. First is how tenuous they seem. Second is that they slight what I now see as our most urgent task: building a progressive movement powerful enough to transform our utterly debased and thus wholly ineffectual politics.

No matter who the Democrats or any party may nominate, winning requires an agenda that speaks to the disaffected, a group that now includes most voters. Democrats can’t do it on their own; they’ve neither the tools nor the permission.  And regardless of who wins we’ll achieve little without a strong movement to hold the winners to account.

Much progressive work goes on outside elections yet is essential both to winning races and enacting reform. Consider two of the most inspiring movements of the 21st century, the campaign to raise the living standards of low-wage workers and the movement for marriage equality.

The working poor don’t have any money to give politicians or to lavish on consultants, but in November they steamrolled big business in four red states. They did it the way progressive movements do: setting a goal and then building consensus and trust in face-to-face meetings with as many people as would talk to them.

At first glance the gay marriage fight looks different. Wealthy advocates gave lots of money to politicians, mostly Democrats running for federal office. But those politicians did no more for gay marriage than they did for restaurant workers. Gay marriage was won in courts, legislatures and referenda. If anything, its success was even more dependent on personal engagement. Its best advocates were the millions of gays who bravely came out to family and friends. If you were so privileged as to be in one of those conversations you saw what progressive leadership is all about.

The latest word out of Hillary’s camp is that she’s thinking of putting off a formal announcement till May or even later. The longer she’s holed up with donors, consultants and other insider types the more vulnerable she’ll be. Progressives must put their time to better use.

We know what kind of leadership we need. Want to help the Democrats? Build a movement that keeps them honest and wins back some of the trust they’ve lost, one that builds a solid case for change and the public support to see it through. Do it and we might win something bigger than an election.