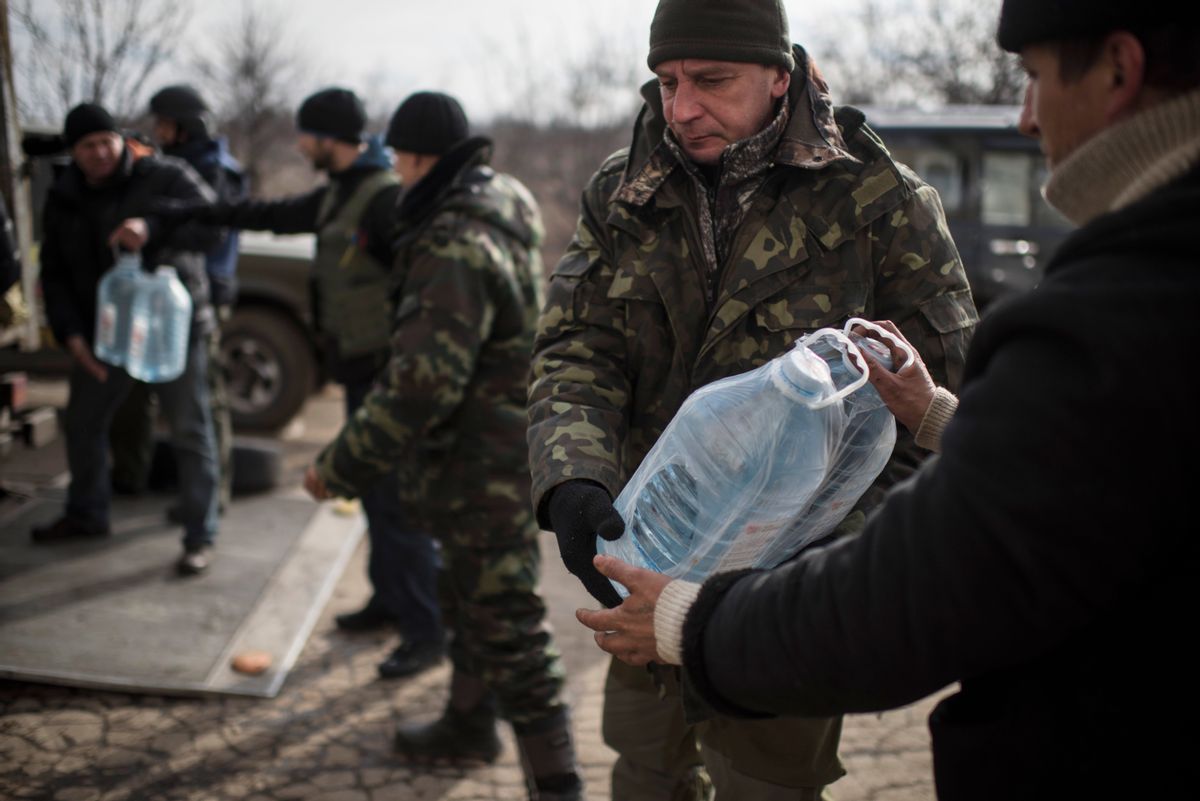 Ukrainian soldiers unload supplies near Debaltseve, eastern Ukraine, Sunday, Feb. 8, 2015. The government-held town of Debaltseve, a key railway junction, has been the epicenter of recent battles between Russian-backed separatists and Ukrainian government troops. For two weeks, the town has been pounded by intense shelling that knocked out power, heat and running water in the dead of winter. (AP Photo/Evgeniy Maloletka) (AP)
--

Leaders from Russia, Ukraine, Germany and France aim to revive a much-violated peace plan and end a war that has killed more than 5,300 people, according to United Nations estimates.

The turmoil, only three years after similar violence killed 74 people, began ahead of a match east of Cairo.

3. LOOK WHAT'S BEARING DOWN ON US NORTHEAST AGAIN

Winter-weary New York and New England brace for another round of snow, with Boston in the crosshairs for up to two feet.

4. WHY HOMELAND SECURITY SPENDING HANGS IN THE BALANCE

The department's budget will freeze by Feb. 27 if Congress doesn't come to an agreement over immigration matters in the agency's annual funding bill.

The parents of American aid worker Kayla Jean Mueller cling to hope that she is alive, days after the militant group said she died in a Jordanian airstrike.

6. FROM PARALYSIS TO POLITICS: A FORMER FOOTBALL PLAYER'S JOURNEY

Fifteen years after a spinal cord injury, ex-Penn State defensive back Adam Taliaferro is one of New Jersey's newest lawmakers.

Investigators may try to determine if the former Olympian or other drivers involved in a deadly chain-reaction Malibu crash were texting at the time of the wreck.

The "Stay With Me" singer takes home the best new artist trophy, while Beyonce and Jay Z win for best R&B song.

But some critics say the potential $1 billion agreement pays too little to former players struggling from the effects of brain injuries.

That's how Michael Jordan recalls Dean Smith, his former coach at UNC and the winningest coach in men's history, who died at age 83 at his Chapel Hill home.