From Sam Smith's sweep to Kristen Wiig's interpretive dance: Everything you missed at the 2015 Grammy Awards

From Pharrell's Ferguson tribute to the return of "Interrupting Kanye," the night as told in videos and GIFs 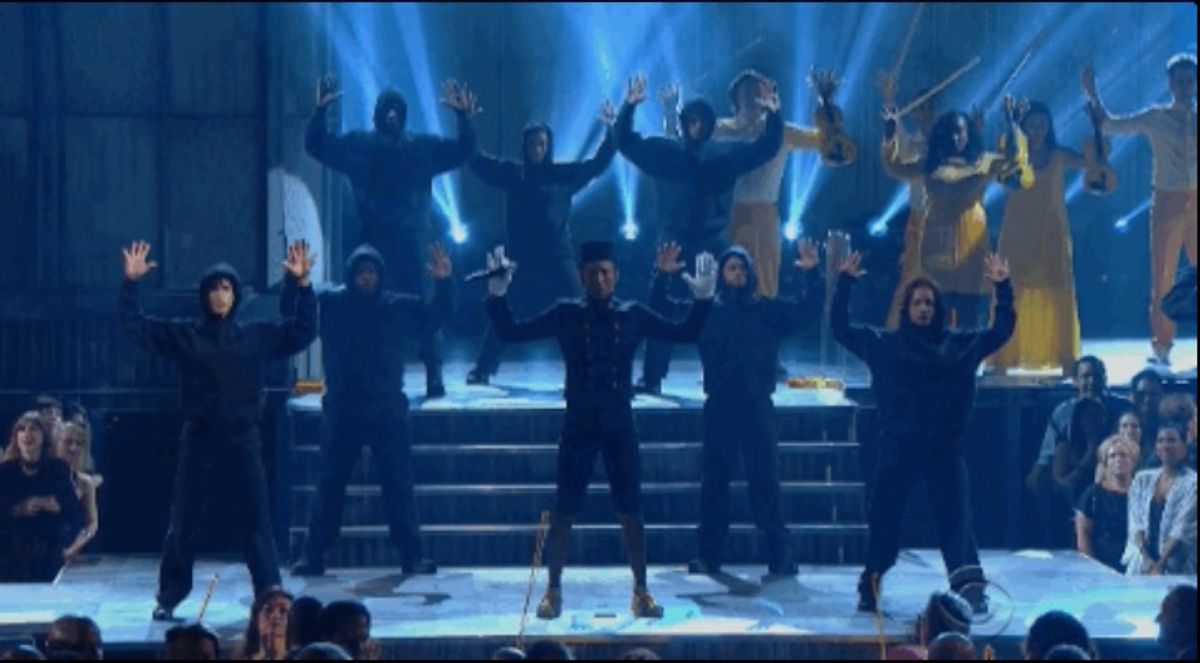 The 2015 Grammys took place last night, and frankly, you probably didn't miss much if you decided to avoid the madness and tune into "Better Call Saul" and "Last Week Tonight" instead. The full winners list is here if you're curious (basically: Iggy and Beyonce lost, Sam Smith won a bunch) but as always, the experience is less about who wins than about all the weird GIFable reactions, off-the-cuff flubs, outlandish set-pieces and bizarre "Grammy moments" that pepper the the nearly four hour long telecast. But let your FOMO rest easy, because we have distilled all the relevant takeaways for you here:

To the relief of everybody, Iggy Azalea did not win the Grammy for best rap album, nor any others. Her braid game, however, was pretty strong;

This was the year of Sam Smith, as the 22-year-old British crooner took home four trophies: record of the year, song of the year, best pop vocal album and best new artist. As he put it at one point, "I'm having a really, really, really good night." See his gorgeous duet with Mary J. Blige on "Stay With Me" here:

Katy Perry, meanwhile, toned things down since last week's Super Bowl performance. After a video message from President Barack Obama and a moving speech from domestic violence activist Brooke Axtell, Perry came out and gave a stirring rendition of "By the Grace of God," off her album Prism. Yet a number of people called out Katy's performance for being hypocritical.

Pharrell’s live “Happy” performance was a bizarre hodge-podge of influences, including a Ferguson tribute and some "Grand Budapest Hotel" lobby boy stylings:

As usual, there were plenty of good audience dancing shots:

Although some cameraman had the nerve to tell Sir. Paul McCartney to sit down during ELO's performance. The nerve!

Kristen Wiig delighted everybody by joining Maddy Ziegler onstage to perform Sia's "Chandelier," proving that she's one of the few people who can match the "Dance Moms" star in interpretive dancing gusto.

Not all the duets and "Grammy moment" teamups were a waste of time. Ed Sheeran's performance alongside Questlove, ELO and John Mayer was surprisingly enjoyable (although a T-Swift reaction shot would certainly have spiced things up).

While Hozier and music legend Annie Lennox, sizzling with energy and a demonic twinkle in her eye, delivered an epic mashup of "Take Me to Church" and "I Put a Spell on You."

Kanye, Paul McCartney and Rihanna did a solid job at their first ever live performance of "FourFiveSeconds" (and welcome back, Rihanna!)

Prince showed up and won the night just by being himself, naturally. (He also took some time to recognize the importance of albums: "Albums -- remember those? Albums still matter. Like books and black lives, albums still matter.")

And the Carters' stunned reaction shots were priceless:

Meanwhile, Kanye and Taylor agreed to let bygones be bygones:

Beyonce may not have taken home the best album trophy, but as her moving end-of-night performance of the Gospel track "Take My Hand, Precious Lord" shows, you don’t need a trophy to prove that you’re the queen.