It's come to this: To appeal to the party's far-right base, GOP leaders want to gut public education. Here's why 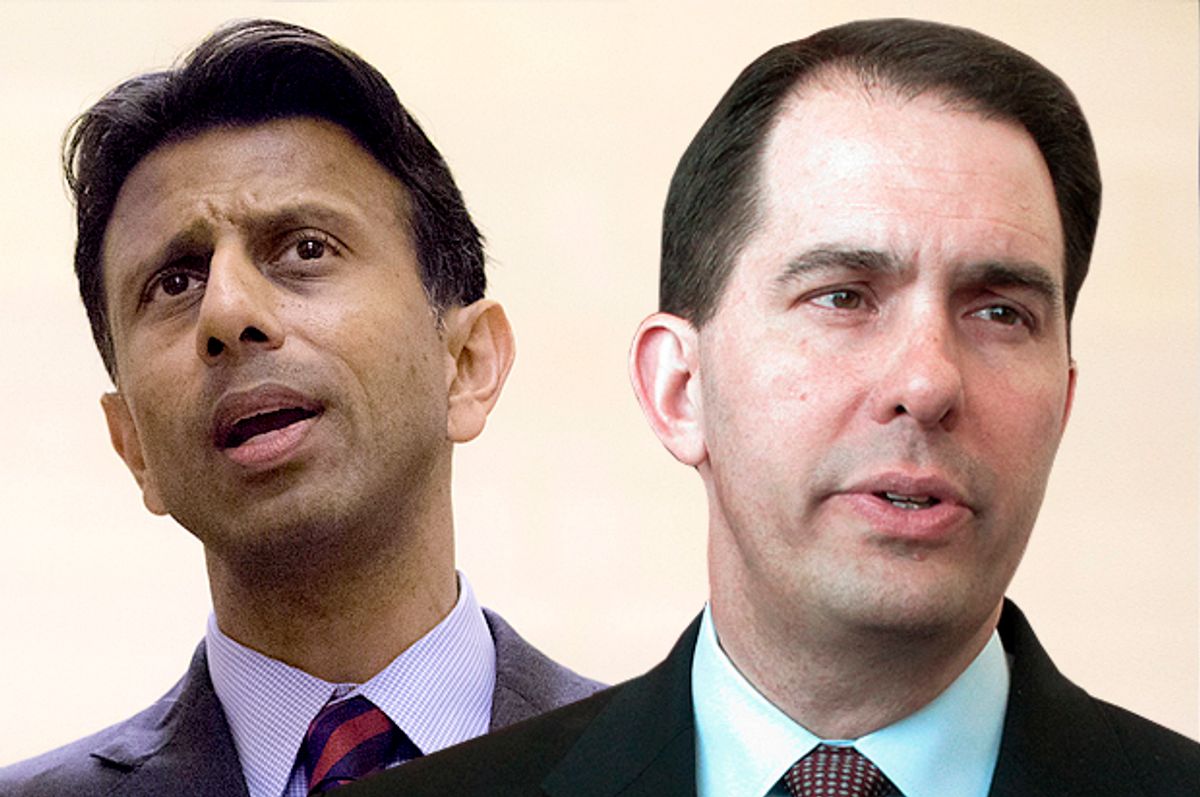 If you’re a governor and you want to be president, usually you run on a record of achievement.  But two such Republican governors, who have both witnessed declining  popularity numbers in their states, are smack in the middle of crises caused by their common design to impose on their states’ highly respected universities punishing budget cuts.  Scott Walker of Wisconsin and Bobby Jindal of Louisiana are eagerly pursuing wider name recognition in the lead-up to the 2016 presidential campaign.  They want to be seen as tough-minded conservatives fighting big bureaucracy on behalf of real moms and dads.  Is it now patriotic to put roadblocks in the way of building a superior system of public higher education?

Scott Walker wants to be president.  Elected twice in a more or less blue state, he thinks he has built up a personal story that gives him the street cred the “new GOP” gets excited about–you can hear it in his hopeful strains before the state Legislature in addressing a huge new budget deficit: Scott Walker is primed to bring back the “American Dream” to Wisconsin.  He likes the idea of mandatory drug tests for people on public assistance.  Big dreams, right?

In the gluttonous era of Citizens United, he’s already gained the attention of the big-money men.  His claim to fame is that he took on public sector unions and won, stripping them of their rights.  He stood up to the Democrat machine (so-called), avoided a nasty recall vote, and then went on to win reelection.  Now, with his state facing a nearly $1 billion budget shortfall, the property tax-cutting Walker has proposed a devastating $300 million cut in the University of Wisconsin’s budget.  Alarmed, the university’s chancellor, Rebecca Blank, has called the reduction “too large for the system to absorb.”

Walker no doubt thinks his act courageously conservative; he says it’s about “efficiencies,” and will somehow make UW “stronger.”  In a Milwaukee radio interview last week, he ignorantly defended the cuts by claiming that university professors needed to be teaching more classes and, yes, working harder.  (How about drug-tested, while we’re at it?)  Meanwhile, as has been widely reported, he aims to spend an amount of state money approximately equal to the university cuts to build a basketball arena.  His upside-down logic?  Professors only add daily, and unendingly, to knowledge of the world; whereas professional hoopsters can be called upon to deliver an extended moment’s entertainment for all who can afford tickets.

What mind-set leads one to argue that cutting higher education funds (while calling it “reform”) strengthens a state?  Is downsizing faculty related, in the conservative lexicon, to the hallowed principle of slashing government bureaucracy?  Seriously, is it?

As for Jindal, after going to London to establish foreign policy credentials, and succeeding only in embarrassing himself with his broad-brush anti-Muslim comments, he came home to speak at the “American Principles Project,” a conservative group seeking influence over public school issues.  According to the most recent issue of Education Week, he berated Washington bureaucrats and all those who were twisting the curriculum for the nefarious America-hating purpose of dismissing the very principle of “American exceptionalism.”

Jindal’s reality-avoiding rhetorical pose is his means of deflecting attention from his failures as an executive.  Louisiana now faces a $1.6 billion budget shortfall, some $300 million of which (the same number Walker has identified in Wisconsin) is meant to come out of higher education.  With the figures Jindal is proposing, Louisiana State University might well be required to cut up to 40 percent of its operating budget.  LSU is already near the bottom of flagship state universities in the amount of spending per student.  It is probably unreasonable to hope that the governor will consent to some invisible form of tax increase (in the most undertaxed of states) that can be called something else so that his pal Grover Norquist–who wanted Mitt Romney to make Jindal his running mate in 2012–can sleep easily.

Jindal is a bright man who wears his conservatism less comfortably than Walker.  Except perhaps for Newt Gingrich, no Republican touts American exceptionalism quite as loudly as Jindal does. He goes overboard in emphasizing his Southernness, his gun-culture affiliations, and (despite his stint as a Rhodes scholar) his insistence that everyone ought to homogenize as he did, surrendering all hyphenated identities (he himself is Indian-American) to pure Americanism.  He has married himself to the politics of fear.  To listen to a Jindal speech is to learn that someone is trying to steal your independence by imposing national standards or take your savings and give it to the unworthy.  Government is plotting a takeover of education, and, by the way, as he repeats ad nauseam, “elites think they’re better than you.”

What makes this precocious Ivy Leaguer (a two-term governor still in his early 40s) not an elitist isn’t clear.  In his heart of hearts he cannot want to damage higher education.  But if his national political prospects are aided by a heartless stance at home, there is no telling what Jindal will try to do. It must be said that he wears his hubris awkwardly.  As Elias Isquith reported here at Salon, the slightly formed governor whose voice can slip into the whine of 30 Rock’s “Kenneth” began making an effort to put pounds on so as to look like a more substantial national candidate.  He wants to be president in order to return power to the states—yet the people of Louisiana are notoriously at or near the bottom of every measure of education, health, and well-being.  (Drawing on FBI crime statistics, the Centers for Disease Control, and other unimpeachable sources, Politico’s second annual assessment put Louisiana in 50th place.)

Over two terms, Bobby Jindal has ruined Louisiana while attacking President Obama for maladministering an improving U.S. economy.  Like George W. Bush in 2001, Jindal inherited a big surplus at the time he entered office, and completely squandered it.  You have to take in more than you spend–it’s an easy principle to understand.  Reluctant to review his own failures, Jindal broadcast his desire to eliminate all income and corporate taxes, in favor of higher sales taxes.  He has done a lot of privatizing, too.  Yet in late 2014, only 21 percent of GOPers in Louisiana said that their governor should seek the presidency–he had, at that point, an approval rating of 32 percent, among the lowest of all U.S. governors, and lower than that of President Obama in the reddest of red states.

Academic standards matter.  Or should.  LSU has a mammoth reputation for its football program.  Suppose LSU’s president shut down football for as long as it took to get the state to equitably support the education of its children.  Like Walker and his basketball stadium project, LSU recently completed a multimillion-dollar makeover of its 102,000 seat football stadium.  The Romanesque structure stands tall–but will it become Louisiana’s equivalent of Rome’s Coliseum, a grand monument that survives while the surrounding community is burnt to the ground?

It is ironic, to say the least, that the party of “family values” is so willing to throw its children under the proverbial bus.  We live in a time when football coaches earn more than the President of the United States.  All the big college football programs, as Steven Salzberg wrote in Forbes in 2011, provide “free training for the super-wealthy owners of professional football teams, while getting little in return.”  Govs. Scott and Jindal have seemingly forgotten that the purpose of every university is to educate and empower a rising generation of good citizens, to fund valuable research, and to teach the tools that support economic growth.

And what’s football by comparison?  Beyond life-altering head trauma concerns, the small numbers who actually receive the useful college education they theoretically signed up for should make all shudder.  Maybe university presidents should hold their football programs hostage.  Non-educational activities ought not to prosper when a fine university is under threat of sinking into the lower ranks of academic standing because of a dependence on irresponsible state leaders for education funding.  No family education, then no family entertainment.  High academic standards have to be priority one.

So, what makes a Jindal think he is a man of good ideas who is needed to rescue the nation from whatever is supposed to be ailing it that liberals inflicted?  How is Jindal’s Louisiana achievement a bright mirror of what he could do for America?  What has his shrinking of government done to improve anyone’s life?  And what makes Scott Walker believe he is equipped to direct the entire United States economy?  Who is telling these charisma-resistant guys to run for president, and what planet do they live on?