The comedian roared back to HBO with season 2 last night 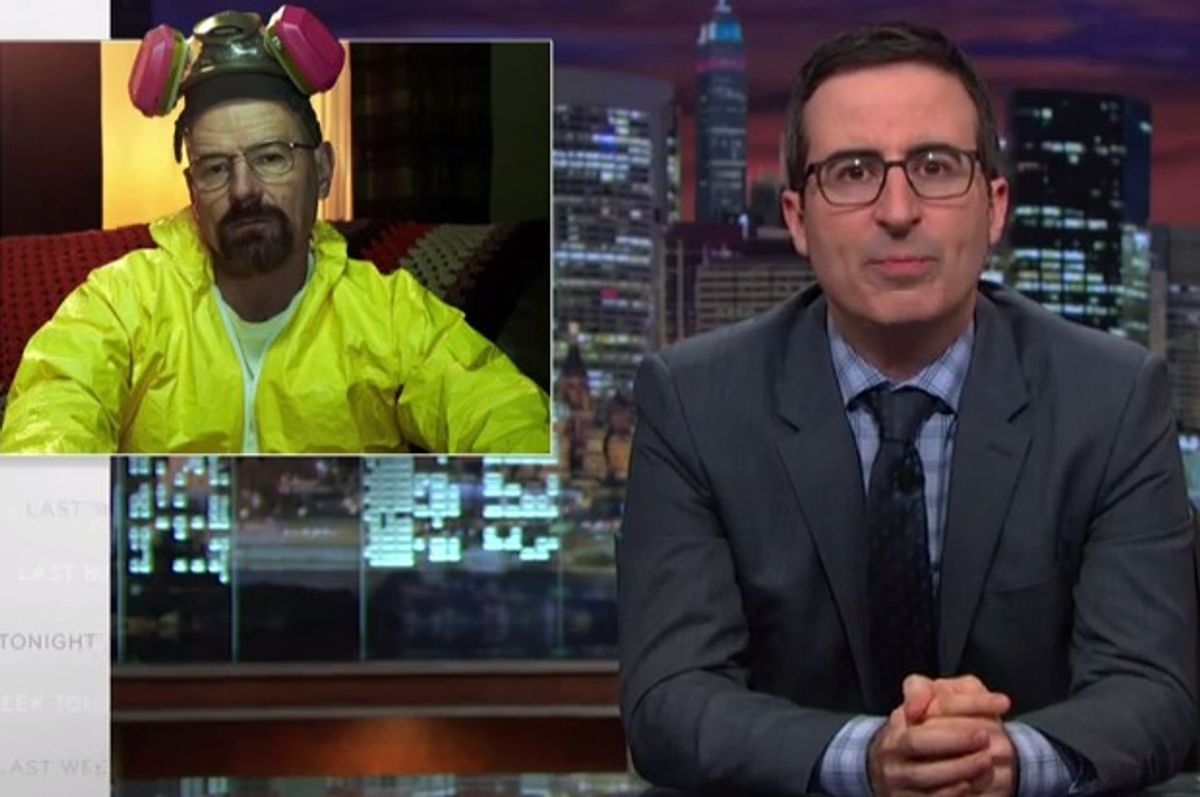 Last night, “Last Week Tonight With John Oliver” roared back to life after three months on hiatus. Its first season was a sleeper hit—a half-hour show on an already packed Sunday night that turned into a must-watch for fans of shows like “The Daily Show With Jon Stewart” and the no longer airing “The Colbert Report.” Oliver got his start as a guest-anchor on Stewart’s “Daily Show,” but for “Last Week Tonight” he took the leap from Comedy Central to HBO, to join a lineup including the dubious charms of “Real Time With Bill Maher.”

I was inclined, at first, to dismiss Oliver’s new show; it is not immediately obvious how “Last Week Tonight” differs from “Daily Show,” “Colbert Report,” and now, “The Nightly Show With Larry Wilmore.” It is, as many shows before have been, a late-night news-comedy show, taking a liberal stance and the continually farcical nature of current events as material for comedy. Stewart’s winning formula was to mimic the style of the nightly news to then comment on nightly news; Colbert took that stance even further, by making the mimicry into full-on parody.

The Comedy Central style often has the anchor playing a little dumb to prolong the joke; it’s the guests that get to deliver the punchlines. This is also the style that “Saturday Night Live”’s “Weekend Update” uses—it’s the art of the comedic straight man, the person who does the hard work of letting the other person be funny.

John Oliver doesn’t have much room on his show for straight men—“Last Week Tonight” has jettisoned almost all of the interview, panel, or guest-anchor segments that characterize other late-night shows, or other news shows, for that matter. Oliver has an audience that he occasionally turns to, but often, like last night, he’s engaged primarily in a rapport with the audience. Partly that’s because Oliver has a lot more material to work with—a week’s worth of news, instead of just one day’s, meaning that the show doesn’t need to fill up minutes by bringing on a guest or two. And partly, that’s because the guests that do show up appear in “Last Week Tonight”’s sketches, those made-for-YouTube bits that are pre-produced during the week.

The result is that “Last Week Tonight” comes off as a far more deliberate and streamlined production. The show makes use of its week of lead time to produce segments that introduce a surprising amount of complexity. Last night, for example—without any discernible news peg—Oliver devoted the main portion of his program to the way prescription drugs are marketed to doctors. It was a segment with the ambition and scope of a feature article in the New York Times—Oliver’s editorial staff dug up archival evidence, old sales videos, and even a clip from a Congressional committee hearing. But lest it get boring for even an instance, Oliver was at hand to offer amusement throughout—whether that was quick commentary following each piece of information, or the pre-recorded capper to the segment, a parody of a prescription drug commercial.

“Last Week Tonight” is a show made in the model of “The Daily Show,” but in its substance, it’s actually closer to a newsmagazine program like “Dateline NBC.” The show’s strength is less in the opening monologue of current events and more in their specific, sharp takes on broader issues. “Last Week Tonight” is educational, but it doesn’t feel educational; it feels like comedy. The show has a demonstrated knack for distilling a lot of information and making it interesting to watch.

The only danger with being so informative is that it can come off is preachy—audiences don’t like being talked down to. It’s there, I think, that the rapport Oliver has with his audience is so important—the close relationship between audience and host indicates that we have his undivided attention. The talk-show element of late-night is one of its most unpredictable. Even with afternoon taping, leaving a few hours in the middle of the day for editing, there are rough edges, weird pauses, and awkward, forced laughter—a conversational, casual tone that is intended to make you, the audience, feel like the show is taking place in your living room.

“Last Week Tonight” scraps that entirely, perhaps recognizing that the way we feel included, in 2015, is less about a living room and more about who’s online right now. The content of the show is easily watchable and easily shareable with the viewer’s community online—meaning that the shared experience is accessible, even without guest-stars. A week’s worth of news, distilled into minutes-long chunks. Late-night hosts typically want to make the audience feel like they’re relaxing after a long day; “Last Week Tonight” feels like the digestible, informative news programming of the future. Instead of a living-room couch, it feels like Oliver is a friend telling you, yes you, something very important that you need to understand. He just happens to also be very funny—but of course, you knew that already! That’s why you’re friends.