Our dangerous macho delusions: Brian Williams' fraudulence -- and our own

The NBC anchor's fibs run deeper: He sold us war as entertainment, chicken-hawk fools as heroes. We all bought it 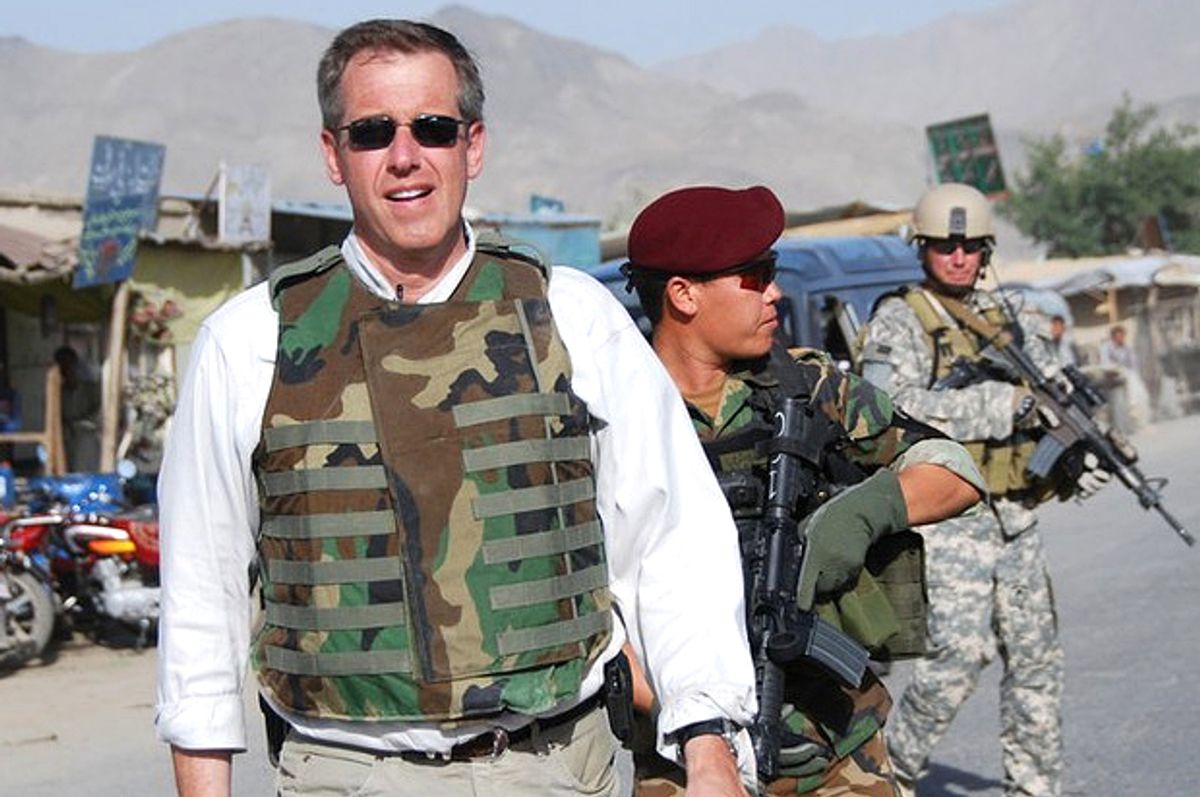 As the whole wide world knows at this point, Williams was not actually aboard a helicopter that was downed by rocket-propelled grenades during the early days of the Iraq War in 2003. That was just something he told national audiences in order to appear intrepid.

At this point in articles of this ilk, the standard move would be to quote Williams talking about his fake experience then to froth about what a disgrace it is that such a prominent journalist could lie about such a thing, and how he has betrayed our soldiers and the public trust and blah-blah-blah.

I’m not going to do that because such sermonizing misses the point, which is that, as Americans, we are totally hung up on notions of physical courage to the near exclusion of moral courage.

I’ll elaborate in just a second, but let’s begin with two smaller points. The first is that Brian Williams, whatever else he might be, is primarily a television star. Every night, he sits on an elaborate set with his hair and makeup just so and he reads the news. To consent to the idea that he embodies the journalistic integrity of NBC News and its affiliated reporters is sort of like judging a deodorant based on how its pitchman smells.

The second point is that the national chorus of indignation over the vain, clumsy lies that Williams told is, in fact, a direct measure of our own neurotic impulses. Americans consume more violence—both real and imagined—than any other nation on earth. Yet as a population, we move about our daily lives with almost no threat of actual violence from enemies abroad.

We're a nation of coddled cheerleaders who have offloaded the physical risks of our imperial adventures to a volunteer army consisting mostly of working-class kids. We cheer for them in the same vicarious manner we do the muscled ubermensches who risk brain damage by ritualizing combat on our bright gridirons.

In this sense, what Williams did is merely an exaggerated version of what any of us might do. He got close enough to the action to appropriate the manly courage of his military escorts. This is why his lies so offend us. In vilifying him, we help cleanse ourselves of the hidden shame we feel at sanctifying war while living amid such decadent safety.

But the outraged kabuki swirling around the Williams scandal reflects a more fundamental confusion in the national psyche: our compulsion to lionize valor above all other forms of virtue, particularly those that involve questioning the moral worth of violence.

If Brian Williams wanted to display genuine courage—if he was interested in actual journalism, as opposed to the elaborate construction of war propaganda—he might have spent his time in Iraq questioning the motives, costs, and intended goals of our invasion. In fact, as the bright public face of a huge journalistic army, Williams might have questioned the unctuous and ultimately bogus justifications our leaders offered for invading Iraq in the first place.

To howl about how Brian Williams has a “credibility problem” because of his famous fibs is to miss the true nature of his fraudulence: that he and his team were happy to render the Iraq War as a form of entertainment, a righteous crusade in which badass high-tech G.I. Joes defend the holy Christian homeland by slaughtering and eventually civilizing Islamic savages.

I don’t mean to single Williams or NBC out. With a few notable exceptions, the television coverage of the war was carefully stage-managed by Department of Defense. We were shown approved footage of rolling tanks and magical bombs, and precious little in the way of dead bodies, American or Iraqi. Our leaders made promise after promise about how the occupation would proceed, nearly all of which proved false.

As I thought about the Williams Follies, a passage came to mind from the book “The Living-Room War” by the media critic Michael Arlen, who spent the late 1960s writing about how the Vietnam War was portrayed on television. Here’s the paragraph in question:

“And I switch back to CBS and there – and there is Morley Safer, CBS’s man in Vietnam, standing in front of a thicket of trees, soldiers moving all around him, the camera taking his picture jiggling slightly, Safer not standing tall and staring purposefully into the camera, the way he’s supposed to, but instead with his hand on his hip, out of breath, telling us about an action that some American troops have just been engaged in, a smallish encounter, two or three men killed, nothing extraordinary, but Morley Safer is out of breath, he has not written anything down, he is speaking with pauses, changes of direction in mid-sentence, occasional gaps between words, he is rubbing his face and moving his microphone about as if he’d just as soon not have to hold it, and pausing again, and going on, doing just fine. He does more than he thinks he’s doing, because in addition to providing a good piece of news reporting he is providing the first sound of an individual human voice that many of us have heard on television for days and days.”

Morley Safer isn’t trying to make himself seem brave here. He’s trying to report the news. Arlen highlights his report as one of those rare moments when the television news manages to show us the urgency and chaos of combat: actual humans beings in proximity to actual death.

The great national shame on display in the Brian Williams “scandal” is that our view of war remains so pathetically and dangerously occluded by macho delusions. It’s as if we’re still back in 2003, with the voice of that tough-talking chicken-hawk president still ringing in our ears. How brave he is! Vowing revenge from a pile of rubble!

But what happens when we define physical courage—in the absence of moral consideration—as our highest good is that we deplete our capacities for mercy. This, in turn, allows our leaders to peddle any invasion or torture program or drone strike, no matter how ill-conceived, no matter how destructive to other human beings, no matter how degrading to our basic sense of decency, as necessary to “the national interest.”

Does America’s civilian culture even understand what war is anymore? That it’s not just some proving ground for the masculine ego, but an experience by which thousands of human beings—many of them women and children—are systematically killed, maimed, traumatized, and displaced? Is Brian Williams really the only American confused on this point? Or is he just the most famous one?