The Grammys' mixed message on domestic violence: It's unacceptable -- except when the abuser is a pop star we like 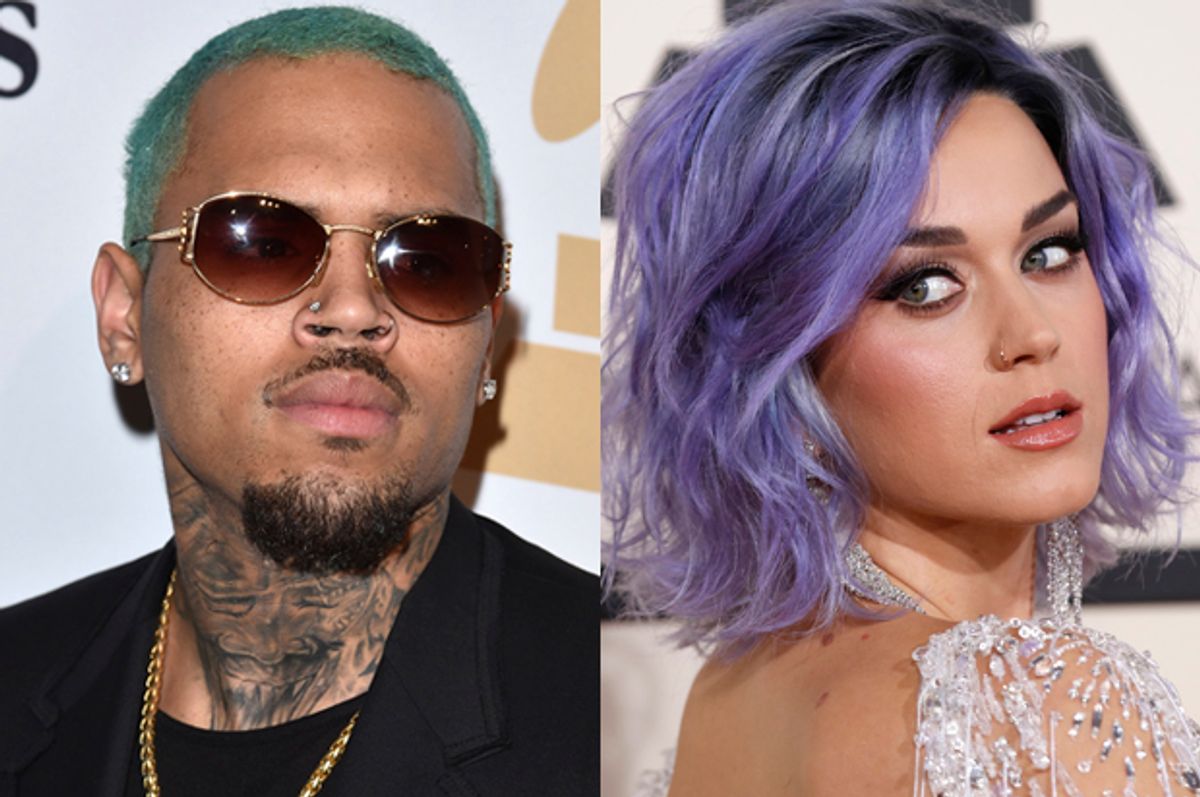 Katy Perry’s Grammy performance last night, a stripped-down rendition of “By the Grace of God,” was introduced with a message from President Obama about violence against women and a moving speech from Brooke Axtell, a poet and anti-violence activist who spoke bluntly about her experience as a survivor of abuse.

In her speech, Axtell addressed the powerful mix of emotions and instincts -- love, shame, compassion, denial -- that kept her locked into the relationship. “I believed he was lashing out because he was in pain, and needed help. I believed my compassion could restore him and our relationship,” she said. “I was terrified of him and ashamed I was in this position. What bound me to him was my desire to heal him. My compassion was incomplete because it did not include me.”

I have little doubt that Axtell’s words resonated with other survivors watching in the audience and at home, and hopefully she will inspire victims of abuse to find help where they can. And while bringing a message about intimate partner violence to millions of viewers is obviously a good thing, there is something odd to me about Perry and the Grammys' short-sightedness about the issue they apparently wanted to bring center stage last night.

Most of the headlines about Perry’s performance, even in advance of the show, were about her sharing the stage with a survivor of domestic violence. In an interview with Slate, Axtell said that Grammys executive producer Ken Ehrlich had asked her to be part of the show as a way for the Grammys "to speak about issues that are important to them." But one thing I kept thinking as I read story after story about Axtell's presence onstage was how, in reality, it isn’t unique to perform with a survivor of domestic violence. It happens all the time, we just don’t talk about it.

Going on the data we have about the pervasiveness of violence against women in the United States, it actually seems that it would be unusual if the Grammys didn’t feature a survivor. We know that the Grammys have featured Rihanna and other high-profile women who have experienced abuse in their relationships. Similarly, a big production Grammy performance, with backup singers and dancers, also almost definitely features a woman who was at one point a victim of intimate partner violence. That is just what the numbers tell us. One in four women will experience abuse in her lifetime. We interact with them daily. They are our neighbors. Our bosses. The singers we love. We know them. They are us.

Which is maybe why Perry's performance left me with a feeling of, Thus concludes our anti-domestic violence portion of the evening, now back to our regularly scheduled coddling of abusers. This is so often how we are asked to think about domestic violence, as something separate and foreign and distinct from the rest of our lives. An issue to be addressed solemnly and then ignored completely.

But living out the kind of awareness President Obama called for -- “a culture where violence is intolerable, where survivors are supported” -- requires more than just a performance at the Grammys that gives a platform to one survivor’s voice, no matter how powerful that one voice may be. If the Grammys and artists like Perry want to take domestic violence seriously, "to speak about issues that are important to them," then they'll need to start incorporating this perspective more broadly in the partnerships they seek out and the artists they celebrate and perform alongside.

Perry, who recently told Rolling Stone that she was “all about female empowerment,” performed earlier this month at the NFL’s Super Bowl halftime show. The NFL has long protected violent players and coddled the coaches and executives who have helped conceal their abuse, but 2014 was a year in which it became impossible to look away or feign ignorance. And yet Perry performed during the league's halftime show.

And while producers at the Grammys may, rightly, feel good about giving Axtell a platform, they also gave Chris Brown, a domestic abuser with a history of other violence, a platform in 2014. And Brown, along with alleged serial rapist R. Kelly, were both nominees this year.

This isn’t easy work, ending a culture that props up abusers and creating space for survivors to speak. And while I was moved by Axtell’s speech, Perry's and the Grammys' commitment to the issue rings incredibly hollow. Axtell’s remarks were so powerful in part because of how candid she was about her own struggle. Leaving the relationship wasn’t an easy process for her. She spoke directly to the messy realities of what survival looks like for women in abusive relationships. But the Grammys can't match Axtell in her bravery or vulnerability. It wants its involvement in the issue to be clean -- a feel-good performance to raise “awareness’ about domestic violence -- while the actual, messy work of making abuse unacceptable and holding abusers accountable is left to others.

Update: A reader brought it to my attention that Eminem also won awards this year in two non-televised categories. Eminem took home best sung/rap collaboration and best rap album, an award he also won 14 years ago. The list of women Eminem has rapped about violently abusing or sexually degrading includes but is not limited to: Kim Mathers, Lana Del Rey, Pamela Anderson, Mariah Carey, Miley Cyrus  and Kim Kardashian.