It's the lessons the U.S. didn't learn from Vietnam that make its loss there the real tragedy

The U.S. has become a serial invader and destroyer of other nations, especially Muslim ones. What happened? 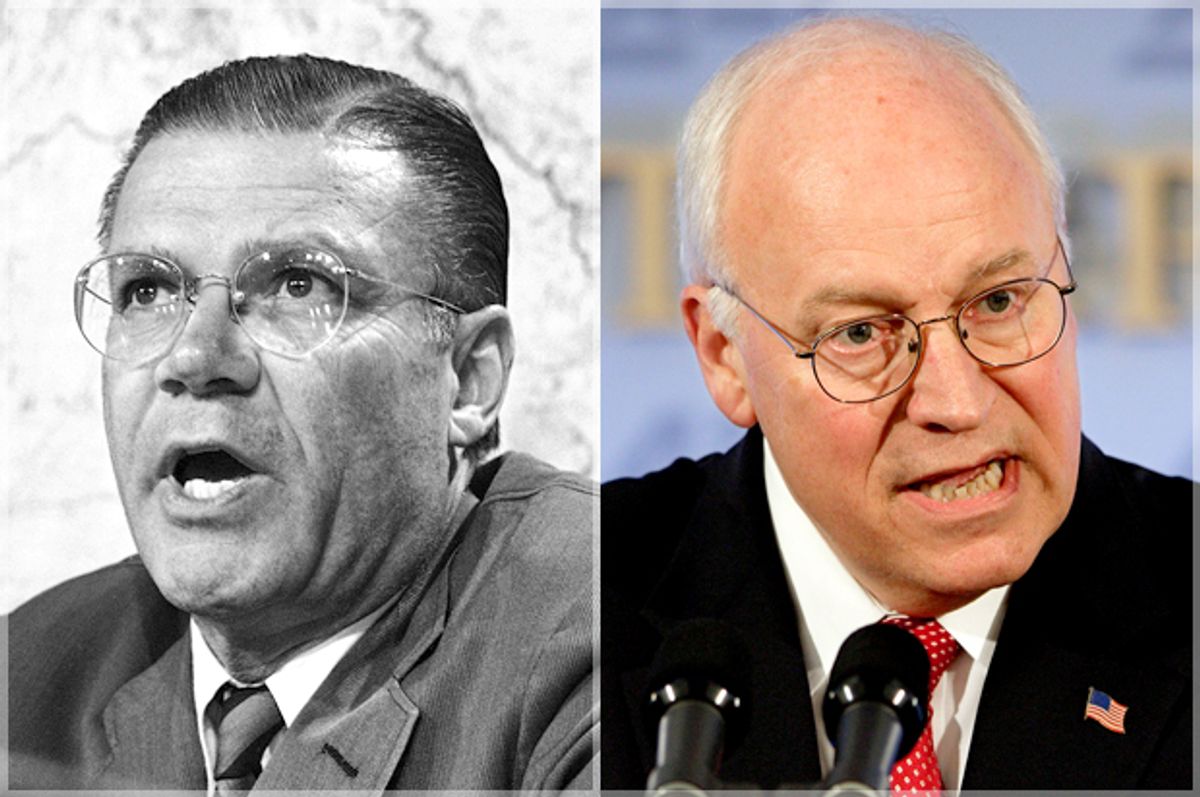 Last month was the 47th anniversary of the start of the Tet Offensive. Tet was the tipping point of the Vietnam War, the battle that exposed the lie of “light at the end of the tunnel.” It is worth remembering to see if we can salvage any lessons from it.

On Jan. 30, 1968, the Viet Cong and the North Vietnamese Army launched a series of assaults aimed at breaking the back of the U.S. occupation of Vietnam. It included attacks on more than 100 hamlets, towns and cities and dozens of military bases. It was named “Tet” for the traditional Vietnamese Lunar New Year, which was when it was launched. It reversed the course of the war, causing the U.S. to begin planning its withdrawal.

The attacks themselves were repulsed but their psychological effect was devastating. For the prior six months, the Johnson administration had waged a “Success Offensive” in the U.S., claiming that the U.S. was winning the war. Robert McNamara, U.S. secretary of defense and the original technocrat, had claimed “all available measures are showing progress.” The myth of imminent American victory was brutally exploded by the surprise, the breadth, the ferocity and the tenacity of the fighting.

But Tet was only the realization of an inevitability. The U.S. defeat in Vietnam was ordained from the beginning. Understanding why is key to learning any lessons from the war.

Ho Chi Minh had approached Harry Truman in 1946 asking if the U.S. would help the Vietnamese evict the French colonial occupiers, much as the Americans had evicted the British colonial occupiers in their Revolutionary War almost 200 years before. Fatefully, Truman sided with the French. That was the “original sin” that doomed American prospects in Vietnam.

That sin was compounded when the French were defeated at Dien Bien Phu in 1954 and the U.S. picked up their sword. It was compounded yet again when the U.S. set up a “South” Vietnam to give itself a foothold to carry on the fighting. The Geneva agreement that had negotiated the French departure explicitly stated that there was to be no division of the country.

The U.S. compounded the sin still again when it brought in a rich, urban, Catholic Mandarin from New Jersey, Ngo Diem, to be the president of a nation of poor, rural, Buddhist peasants. And it utterly destroyed its credibility as a country trying to save the Vietnamese people from the horrors of communism when it dropped four times the tonnage of bombs on Vietnam than had been dropped by all sides in all theaters of World War II combined.

So, if the turning point hadn’t been Tet, it would have been some other battle. The U.S. had not only not “won the hearts and minds of the Vietnamese people,” it had repulsed them with its hypocrisy, its condescension and its savagery.

It’s worth noting that its savagery repulsed its own people as well. As television images of assassinations, carpet bombings and napalm crept into the nightly news Americans rose up in protest. When middle-class white boys began coming home in body bags  people took to the streets. The massive protests of the late '60s convinced Lyndon Johnson’s committee of “Wise Men” that he had to end the war. Two months after Tet Johnson announced he would not run for reelection in 1968. He turned the task of withdrawal over to Richard Nixon.

Under Nixon, the U.S. left Vietnam in 1973, though not before he had tried to “bomb them back into the stone age.” For the prior two decades the U.S. had proclaimed that it would “not let Vietnam fall to the communists.” Vietnam fell to the communists in 1975, making it the first war America had ever lost.

Are there any lessons the U.S. might have learned from that defeat?

The military certainly learned to control the media presentation of its wars, hence the journalistically humiliating “embedded reporters” who only report self-serving stories of American soldiers’ battlefield valor. The result is a suitably ignorant, confused and, therefore, pacified public that can only burble crypto-patriotic vapidities about American prowess and honor in its now unending wars.

The same media, now concentrated in corporate hands, has learned how to easily engineer consent for the wars that the empire demands. Witness, for example, the lies about weapons of mass destruction that were used to justify the U.S. invasion of Iraq, not unlike the Gulf of Tonkin lie that formed the go-ahead for U.S. escalation in Vietnam. Witness, too, the lies about Bashar al-Assad gassing his own people in Syria, and of Putin being the aggressor in Ukraine—all public rationales for recent U.S. aggressions.

The government, the weapons industry and their handmaiden media have certainly learned how to swap out “communism” as the national bugaboo and replace it with “terrorism.” As a device for keeping people scared, intimidated and docile, they are almost search-and-replace alternatives—easily contrived, easily manipulated, easily escalated and constantly, threateningly invoked.

But it is the lessons the U.S. did not learn and the behavior it did not change from Vietnam that make its loss there the tragedy that it really is.

The U.S. did not learn the limits of imperial power. Vietnam cost the U.S. $450 billion. It inflicted grave damage on the U.S. economy and even greater damage on the U.S. reputation as a “beacon of democracy” in the world. Iraq alone will end up costing the U.S. some $6 trillion according to Nobel Prize-winning economist Joseph Stiglitz. That’s twice the amount needed to make Social Security solvent forever. The cost to the U.S.’s prestige in the world is still being tallied.

The U.S. certainly didn’t learn how to live at peace with other nations. Indeed, without the threat of the Soviet Union to constrain its aggression, the U.S. seems to have become a serial invader and destroyer of other nations, especially Muslim ones. Think Yugoslavia, Afghanistan, Pakistan, Yemen, Ethiopia, Iraq, Syria, Libya and more, where the U.S. has killed millions of Muslims, mainly civilians.

Perhaps the greatest irony is that the U.S. has become the very agent of falling dominoes that it once so ominously invoked in justifying its aggression in Vietnam. The “domino theory” was a brilliant — because simplistic — device for evoking a cascading series of communist takeovers from Laos and Cambodia on through Thailand, Burma and all the way to India. The CIA repudiated the theory in 1961, four years before the U.S. escalation, but the public never seemed to have gotten the memo.

Today, it is the U.S. that is tipping over dominoes around the world and there’s no end in sight. Its illegal invasion of Iraq ignited the Sunni-Shiite civil war that has metastasized into ISIS and threatens U.S. allies throughout the Middle East. Its destruction of government and all forms of order in Libya has loosed mayhem throughout North Africa, echoing now as Boko Haram in Nigeria. Its backing of the February 2014 coup in Ukraine threatens to unleash civil war in Europe with an outcome that, at its worst, portends World War III.

In 1995, McNamara published his memoirs of his experience with Vietnam, titled “In Retrospect: The Tragedy and Lessons of Vietnam.” In it, he wrote, “We of the Kennedy and Johnson administrations who participated in the decisions on Vietnam acted according to what we thought were the principles and traditions of this nation. We made our decisions in light of those values. Yet we were wrong, terribly wrong. We owe it to future generations to explain why.”

If Tet teaches us anything it is how little has been learned, how much has been forgotten, and how difficult it is for an arrogant nation to change its destructive ways.

Robert Freeman is the author of "The Best One-Hour History" series, which includes "The Protestant Reformation," "World War I," "The Vietnam War" and other titles.