The film industry’s sorry state: There were fewer female protagonists in 2014 than there were in 2002 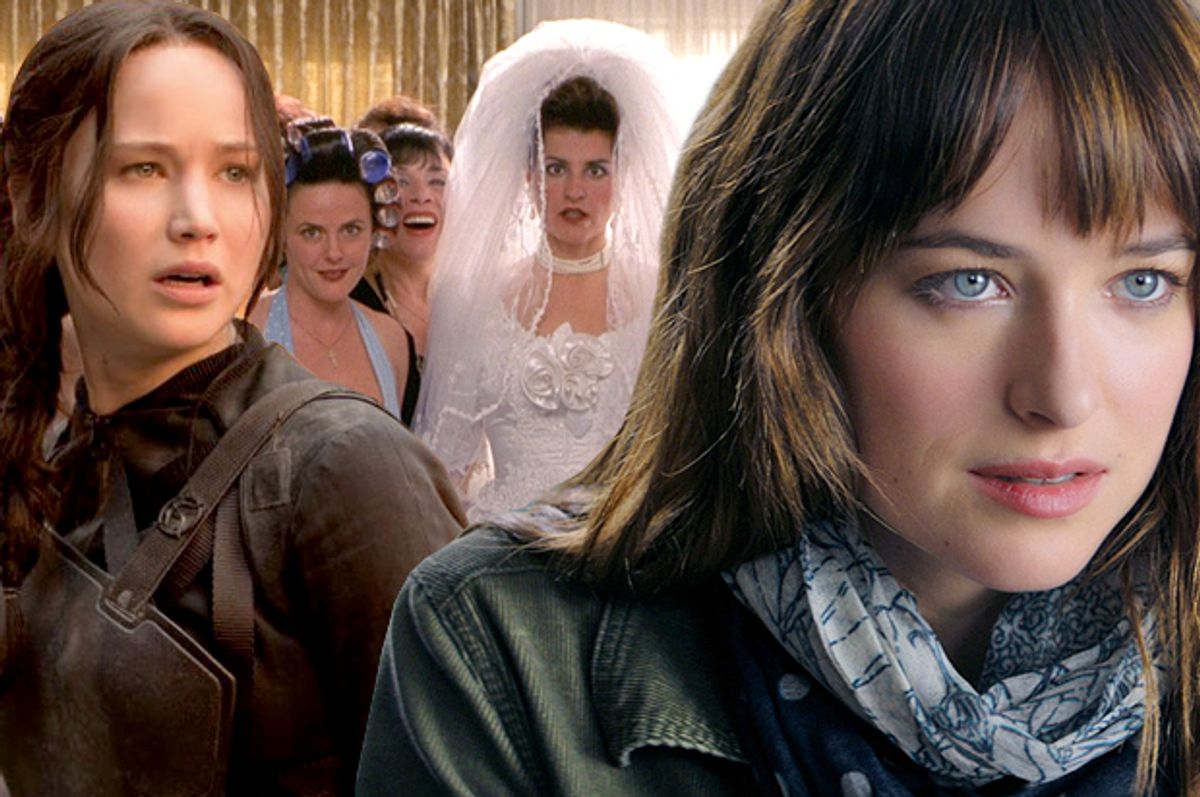 Whatever you might feel about the aesthetic or political merits of the upcoming “Fifty Shades of Grey” movie, at least it's a woman's story.

That fact is more significant than you’d think. While a handful of very visible female-centric movies, like "Gone Girl" and "Mockingjay" made a big splash at the box office last year, the situation for women onscreen is actually more dire than ever. A study conducted by San Diego State’s Center for the Study of Women in Television and Film analyzed 2,300 characters in the year’s highest grossing domestic films to discover that, of the top grossing films of 2014, women were protagonists only 12% of the time. The figures have dropped three percentage points from 2013 and four percentage points from 2002, when the highest grossing film with a female protagonist was "My Big Fat Greek Wedding," starring Nia Vardalos, at the number five spot.

The stats are just as depressing across the board. Females are similarly underrepresented in secondary roles, comprising just 29% of major characters and 30% of speaking characters. The study found that gender stereotypes continue to exist on film: While most male characters are shown in the workplace, females are mainly identified as wives, mothers or girlfriends. Men are more likely to fight and commit crime, while women were more likely to be depicted helping others. Diversity has declined slightly as well: only 11 percent of female characters are black and 4 percent Latina (both a decrease from last year) while 4 percent are Asian (a raise of one percent).

“The chronic under-representation of girls and women reveals a kind of arrested development in the mainstream film industry,” said Dr. Martha Lauzen, executive director of the Center for SDSU's Study of Women in Television and Film. “Women are not a niche audience and they are no more ‘risky’ as filmmakers than men. It is unfortunate that these beliefs continue to limit the industry’s relevance in today’s marketplace.”

Another recent study conducted by Lauzen’s team indicated that things are no better behind the scenes, finding that women made up only 17% of directors, writers, executive producers, producers, editors, and cinematographers on the top grossing movies of 2014. One needs look no further than this year’s Oscar race to see these trends in action. This year, not a single one of the best picture nominees featured a female protagonist, and no women were nominated in the directing or screenwriting categories. Yet having more women behind the scenes could have a positive impact on the amount of women onscreen: As Lauzen discovers, in films with at least one female writer or director, 39% of protagonists are female, vs. just 4%  in films with all-male writers and directors.

"I think part of it is continuously talking to people who have power, because a lot of them don’t understand, or don’t realize, how egregious it is," said Melissa Silverstein, director of the Athena Film Festival celebrating women in leadership, when we spoke to her last week. "Their jobs are to make money, to make movies that make money, and they get put forward with the directors, they get these scripts, everything becomes like a cycle. You need to put a pause on it and say, 'Maybe the cycle’s not working anymore, we need to think outside the box.' Sadly, even though we’re half the world, thinking about women is outside the box."

So when the astronomically high box office numbers for “Fifty Shades of Grey” roll in this Friday, don't expect me to be surprised. There is a clear thirst for diverse depictions of female experience on screen, one that isn't being met by the paltry offerings Hollywood is putting forward. (And isn't necessarily being sated by TV's diverse landscape of rich female roles, either.) The numbers don't lie: Jennifer Lopez’s "Boy Next Door" was by all accounts not a good movie, but viewers showed up in droves, with the film ultimately grossing over eight times its original budget. Anastasia Steele may not exactly be a feminist hero, but she's a real woman with a set of unique goals and desires, whose billing isn't "wife" or "sexy co-ed number 2" or "Katniss Everdeen." Her story matters. We might be a long way from seeing femininity represented all its myriad hues and shades, but at least "Fifty Shades" is a start.