Amy Poehler? Louis CK? Who should host the "Daily Show" next

What about Chris Rock? Samantha Bee? We look at the favorites and the wild cards in line for the throne 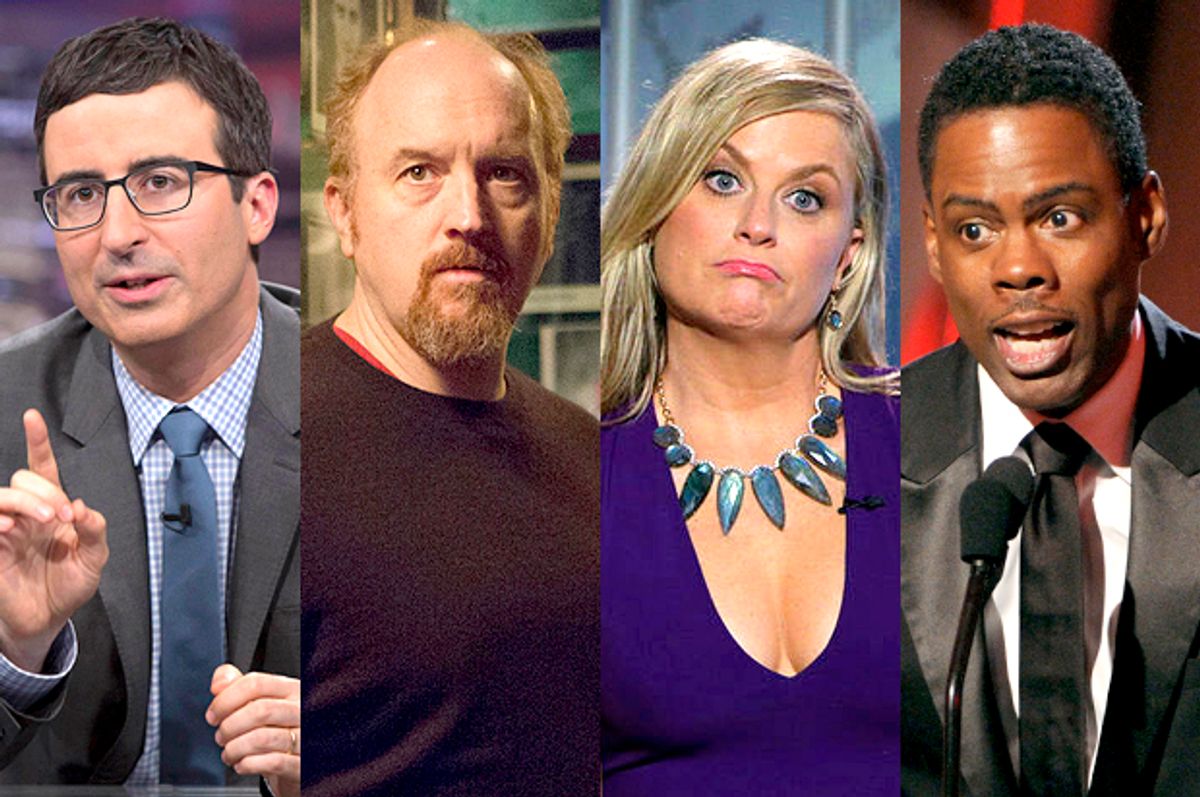 It's so hard to say goodbye to a beloved institution like Jon Stewart anchoring "The Daily Show," but after the mourning comes the inevitable morbid examination of our comedic line of succession, complete with odds-making and and endless speculation.

It could be foolish for Comedy Central to cannibalize its own lineup, so “The Nightly Show With Larry Wilmore” is likely to stay its own satisfying beast — for now.

Everyone has an opinion on who could be the Next Jon Stewart, and with a deep well of talent to draw from itself, a "Daily Show" alum — say, long-time correspondent Samantha Bee — might be the most likely choice. But after 16 years of the same flavor, it's also just as likely that Comedy Central could shake up its most influential product. Let's take a look at some of the front-runners and dark horses in this race.

John Oliver
Many are going to point to dry-witted “Last Week Tonight” host John Oliver as the de facto heir apparent to Stewart’s throne. But Oliver has his own singular thing going over at HBO, and he might not be super-eager to jump back into the old Comedy Central format. On “Last Week Tonight,” Oliver doesn’t just have to react to the news every day, he gets to shape long-form commentary on current events — a creative luxury that could be tamped down in the demands of an every-day schedule.

Amy Poehler
“Parks and Recreation” is coming to an end this month, so Poehler is free. She has an incredible amount of anchor cred from her years co-hosting "Saturday Night Live’s "Weekend Update and knows how to deliver absurd punchlines with a disarming twinkle in her eye. Poehler also has that wacky best-friend quality that would give the interview segments an unpredictable appeal. If she wants the job, it’s probably hers.

Chris Rock
He’s one of the most intelligent, outspoken and charismatic comedians working today, and nobody — nobody — delivers exasperated outrage and smart commentary on politics and culture like Chris Rock. Stewart helmed “The Daily Show” to its current perch as the most reliable and comprehensive outlet for news commentary on TV, and Rock could be the right voice to deliver the show to its next level.

Tina Fey
Calm down, Feygency. Tina Fey might be the anchor “The Daily Show” deserves, but this isn’t the show she needs right now. Would she be amazing? Of course. But after years at SNL and then “30 Rock,” Fey knows what a grind this kind of work can be. Like Fallon and Meyers before her, when she wants it, she won’t need this gig on her resume to land one of the network late-night desks.

Samantha Bee
She’s the longest-serving regular correspondent on “The Daily Show,” so for fans, Samantha Bee would provide no small measure of continuity, keeping the tone and the approach relatively stable during the transition. Time and again — go back and watch her interviews at the 2012 Republican National Convention, especially — Bee has shown she can go head-to-head with political blowhards and spin doctors and come out on top. She’s not quite a household name, like Poehler or Rock, but she’s certainly stayed with “The Daily Show” long enough — maybe because she knows she’s next in line?

Jason Jones
But Bee’s husband, fellow “Daily Show” correspondent Jason Jones, could also step into the lead role. He has experience hosting — he sat in for a sick Stewart last fall, and has demonstrated a knack for the meta-joke in his recurring “Law & Order” guest role as the host of the fake news show "Len Pewels' America." Weirdly enough, if we needed to cast a fake Brian Williams for an SNL sketch, he'd be a great choice, which may just work in his favor in these odd media times.

Sarah Silverman
We've long thought Sarah Silverman would be a fun addition to the late-night line-up, and she's a mercurial enough talent that you never quite know where she's going to land on a joke — she could push the boundaries of what we expect from "The Daily Show" host. Silverman interviewing Mike Huckabee would be glorious. A bonus: if watching Silverman go toe-to-toe with Jimmy Kimmel in the late-night ratings war isn't enough to make you not cut the cable cord, we don't know what is.

Louis CK
Remember the arc on “Louie” when he decided to try out for David Letterman’s late-night gig, written and aired years before Letterman announced his retirement? Louis CK has precision timing, an Everyman affability, and is one of the finest comedic minds of his generation. Would he give up his groundbreaking FX show for the demands of hosting “The Daily Show?” He’d be brilliant, but Louie is best when he’s exploiting his own human foibles for laughs. Would the relentless absurdities of our news cycle turn him into an (even more) bitter old man before his time? It seems like a high price to pay.

John Hodgman
Another “Daily Show” alum who could take the show’s tone in a quirkier direction, Hodgman has an eclectic media track record—he’s done everything from contribute to McSweeney’s to heading up his own “Judge John Hodgman” Maximum Fun podcast—and his dry, cerebral wit is tempered by a sweetness that flirts with appearing deceptively naïve.

Patton Oswalt
Because he's unabashed about his liberal principles but he's nobody's stooge. Also, because he once went to three Los Angeles public library branches in one day to read aloud from "Moby-Dick." (Come on, that's awesome.)

Nick Offerman
Again, “Parks and Recreation” is over, and the idea of a Ron Swanson-esque character leading his own Comedy Central show is just crazy enough to work.

Kristen Schaal
She's too weird, and we mean that as a compliment. Besides, she has a new sitcom coming up next month with Will Forte, "The Last Man on Earth." Kristen Schaal's talents are needed elsewhere, but we hope "The Daily Show" will always have a place for their Senior Women's Issues Correspondent.