Key members of the European Union, including Germany, have expressed misgivings about Athens' ties to Moscow 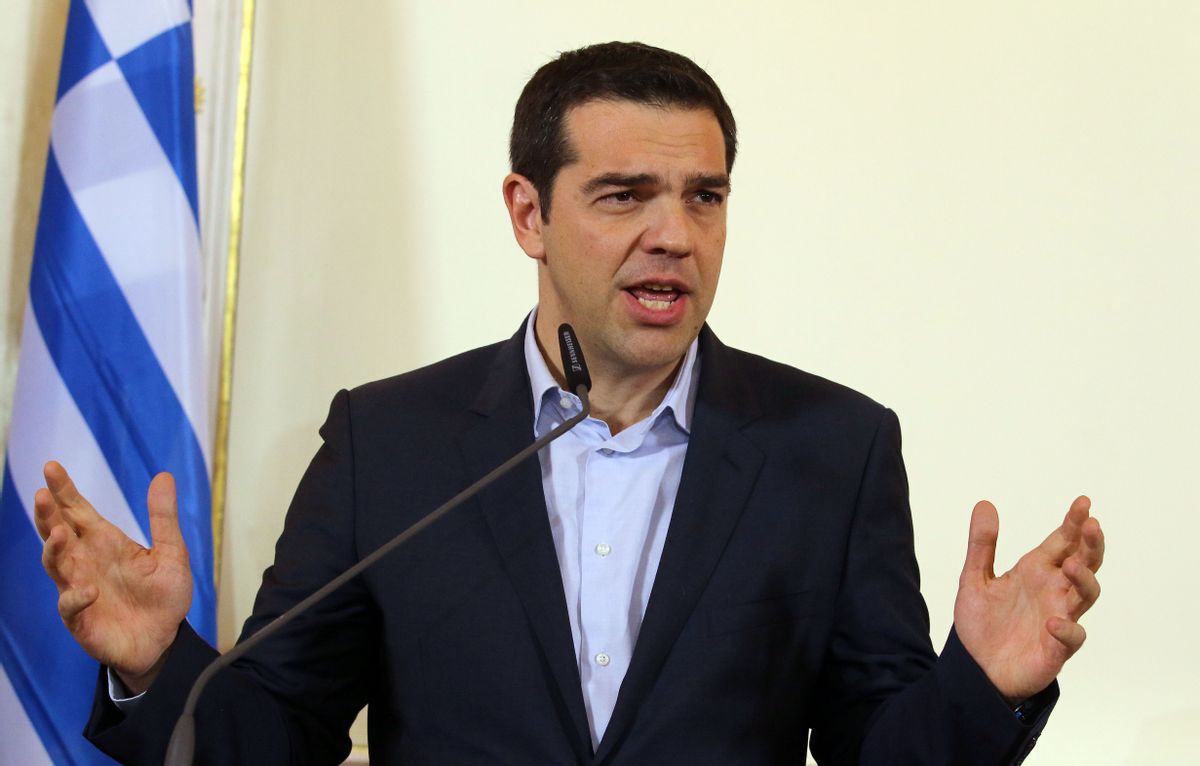 LISBON, Portugal — Of course the warning had to come from the Germans.

With the two countries at loggerheads over Greece's economic program, it fell to German Defense Minister Ursula von der Leyen to voice the fears of many in NATO about the foreign policy goals of the new government in Athens.

Von der Leyen went as far as to suggest a new, more Russia-friendly stance could jeopardize Greece's position within the Western alliance.

"Greece will have to shift. You can argue all the time about reform in Europe, but there can be no doubt we have to agree on fundamental values. Greece must not put at risk the trust in the reliability of its security policy that has been developed over decades," she told the daily Sueddeutsche Zeitung, ahead of a meeting of NATO defense ministers on Thursday.

He evoked Germany's Nazi past while suggesting Berlin was overriding international institutions to extend its own dominance in Europe.

“Greece always was at the side of the allies when they repelled the German occupation troops," Kammenos said in a statement Thursday. "The behavior and the statements of German officials who replace NATO and EU institutions are not only impermissible, but coercive."

As on the economy, Europe is struggling to understand where Greece is going on foreign policy.

The coalition of far-left and hard right parties elected on Jan. 25 has been sending out mixed messages — particularly over the vexed question of Europe's relations with Russia.

Kammenos flew to NATO headquarters in Brussels on Wednesday to soothe concerns.

A swearing in ceremony in Athens meant Kammenos could not attend Thursday's meeting of NATO defense ministers, but his representatives did not seek to block the key decision to strengthen the alliance's eastern borders with reinforced rapid reaction forces — a move denounced by Moscow.

Yet as the NATO ministers were meeting, Greek Prime Minister Alexis Tsipras was chatting on the phone with Russian President Vladimir Putin, accepting an invitation to Moscow and mulling how to "substantially" strengthen bilateral ties — including through a Russian gas pipeline project that bypasses Ukraine.

The following day, however, he largely went along with an EU agreement to impose more sanctions — although he may have been relieved to see that his EU colleagues were not exactly proposing to radically toughen their approach.

They only proposed adding the names of a few more Russians — expected to be relatively minor officials — to a list of those banned from traveling or moving assets through the EU. The incremental extension of that blacklist has proved wholly ineffectual in deterring Russian aggression in Ukraine.

A bigger test could come next Thursday, when Tsipras attends his first EU summit. That meeting is scheduled to discuss broader economic sanctions on Russia — as well as Greece's economic mess.

Tsipras has denied any link between the two issues. He has dismissed talk Greece could turn to Russia to bail out its economy if a race-against-the-clock effort to strike a deal with EU partners fails — although Moscow has offered to help out.

Diplomats in Brussels however fear the Greeks could seek to use the threat of blocking a tougher line on Russia to secure EU concessions on the economy.

While their declarations seem contradictory, there's no doubt the government comprised of Tsipras' Coalition of the Radical Left (SYRIZA) and Kammenos' nationalist Independent Greeks party (ANEL) carry a lot of pro-Russian baggage.

Tsipras has repeatedly complained about EU sanctions on Russia and called Europe to instead seek closer ties.

As fighting raged in Ukraine last year, SYRIZA repeated the Putin regime's claims that the government in Kyiv is a nest of "Neo-Nazis" operating with the support of "imperialist forces" in the West.

A couple of days later he suggested Greece could become a "bridge of peace and cooperation between the EU and Russia." Officials from both countries are working to make 2016 a Russia-Greece friendship year.

Kammenos has been a frequent visitor to Moscow. While there in early January, he called for southern European nations to build an alliance to overturn the "stupid, stupid situation with sanctions against Russia."

Foreign Minister Kotzias was photographed hanging out with Russian ultra-nationalist Aleksandr Dugin who spoke at a Greek university in 2013 as part of a course tutored by Kotzias. Dugin, who is influential at the Kremlin, last year called for a "genocide" of a "race of bastards" in Ukraine.

Beyond Russia, the Greek government’s approach to other foreign policy issues also has allies worried.

Syriza has traditionally held strong pro-Palestinian views. Its election victory was warmly welcomed by the radical Hamas group. Although Israel may have been reassured by Kammenos' pledge to "continue to cooperate at both political and military level" it can be less happy with accusations of anti-Semitism leveled against members of his ANEL party.

In one of his first acts after becoming minister he took a helicopter trip over a contested Aegean Sea islet that sparked a crisis between the two countries 20 years ago. Turkey scrambled fighter jets in response.

On Ukraine, Greece is hardly alone within the EU in its reluctance to get tough with Russia.

Cyprus, Slovakia, Hungary, Italy, the Czech Republic, Spain, France and Germany are among those reluctant to up the ante due to concern over economic interests or fear of Putin's response.

Yet few have ministers in power who have expressed such open sympathy for Russia as new Greek administration.

The Tspras government looks sure to make it harder to find consensus on further measures to deter Putin's designs on Ukraine — or even an extension of existing EU economic sanctions which start coming up for renewal in March.