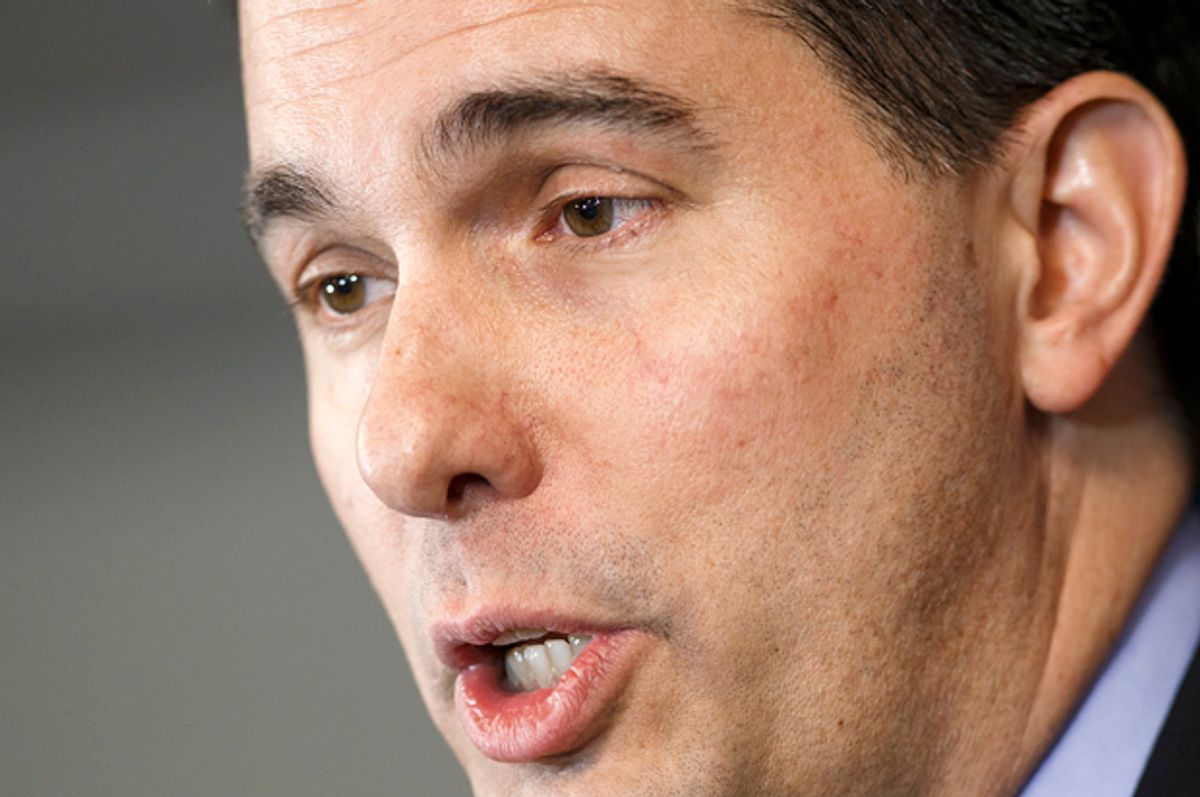 Wisconsin Gov. Scott Walker jumped to the front of the unimpressive GOP 2016 presidential pack thanks in large part to rave reviews for his speech at the conservative Iowa Freedom Summit late last month. (The Washington Post charts the impact of the speech here.)

But it turns out one of its most powerful moments was a lie.

Walker told the story of Megan Sampson, whom he said was “the [2010] Outstanding Teacher of the Year in my state.” He claimed Sampson was laid off that same year by Milwaukee Public Schools because of union seniority rules, which were abolished by Act 10, the 2011 legislation that dismantled protections for public employees.

In fact, Sampson was not the Outstanding Teacher of the Year, not even one of them. An actual 2010 Wisconsin Teacher of the Year, Claudia Klein Felske, who won the high school award, laid out the extent of Walker’s fib in an open letter to Walker posted on the Marquette Educator site Monday. There were also awards given for middle school, elementary school and special services teachers of the year, she explained, but Sampson was not among them.

It turns out the award Megan Sampson received was the “Nancy Hoefs Memorial Award,” given to “an outstanding first year teacher of language arts” by a small Wisconsin English teachers association. Winners nominate themselves, and there were fewer than a dozen such nominations that year.

It’s true that Sampson was sent a layoff notice due to state budget cuts that year, and seniority was one factor, but she was recalled to her post that same summer. She declined the job, and went to teach in the suburbs.

And while Walker was boasting that his 2011 rollback of public workers’ rights made layoffs of younger teachers like Sampson impossible, in fact Act 10 doesn’t even prevent the use of seniority in layoffs. (Uppity Wisconsin has a good recap of Walker's distortions here.)

Walker has used Sampson politically before. In a 2011 Wall Street Journal editorial, he told her story a tiny bit differently, saying she “was named an Outstanding First Year Teacher in Wisconsin,” while still using her to hype his assault on collective bargaining.

The irony is that Felske was classmates with Walker at Marquette University, where he left without graduating under still-mysterious circumstances. She charges her former classmate with “a systematic attempt to dismantle public education, the cornerstone of democracy and the ladder of social mobility for any society.”

I was remiss last week in failing to write about Walker’s slashing the budget of the University of Wisconsin system – of which I’m a product – by a punishing 13 percent. Maybe more outrageously, he attempted to slash the nationally renowned foundation of that system, the statement of ideals that became known as “the Wisconsin idea.” Walker tried to cut such statements as “basic to every purpose of the system is the search for truth,” and that the system’s mission was “to educate people and improve the human condition” and “serve and stimulate society.” The new statement charged the university with meeting “the state’s work force needs.”

As the New York Times editorialized, “It was as if a trade school agenda were substituted for the idea of a university.” Walker later claimed the changes to the statement were the result of a “drafting error,” but in fact a Walker budget analyst had directed the changes in language. And when university officials protested, they were rebuffed. Wisconsin’s Politifact rated the governor’s claim of a drafting error “not only inaccurate, but ridiculous. Pants on Fire.”

Felske closes her letter by remembering their freshman orientation at Marquette University. “I graduated from Marquette and later became Wisconsin High School Teacher of the Year. You never graduated, and you became the Governor of the State of Wisconsin bent on dismantling public education. Ironic, isn’t it? Situational irony at its best. I’d laugh if its ramifications weren’t so utterly destructive for the state of Wisconsin.”

Will Walker’s latest fibs be destructive for his presidential bid? We’ll find out. The national media has yet to dig deeply into the many nagging questions about Walker’s career, from his Marquette student government hijinks to his mysterious departure from the university, to his Red Cross years, to all the details of the two John Doe probes that led to the conviction of six aides and close associates.

Walker’s a frontrunner in some polls right now, but this year might be a rerun of 2012 – a bit like a kids’ T-ball tournament, where everyone’s takes a turn as winner, and everyone gets to hold onto the trophy for a while. (Remember when Herman Cain and Newt Gingrich led the pack, and Michele Bachmann won the Ames Straw Poll in Iowa?) I’ve underestimated him before, I admit, but I don’t see this guy as a presidential nominee, let alone president.