The new racists on campus: Meet the youth wing of the white nationalism movement 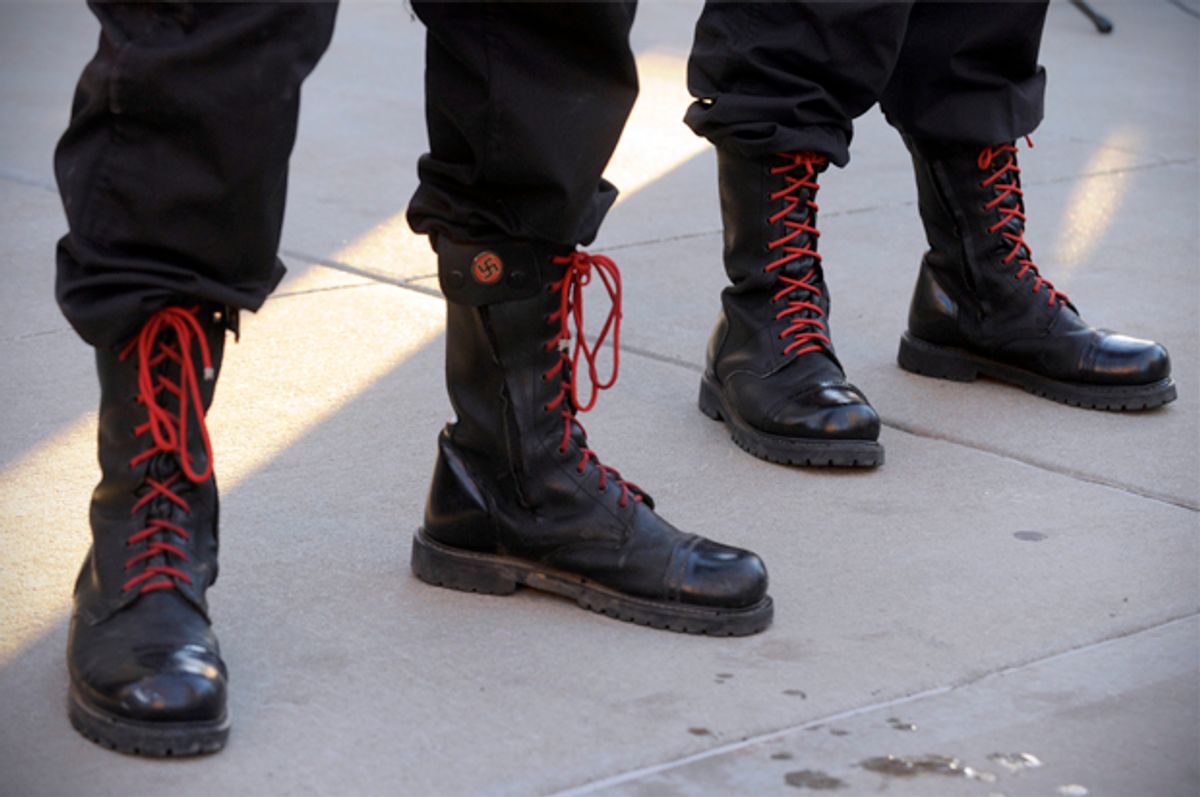 Late last week, on the campus of Arizona State University in Tempe, a hooded individual distributed fliers and hung posters declaring a war on immigration. Using the most recent covers of Charlie Hebdo as a backdrop, the flier was intended to be a call to action and an ominous warning: “America is ours, and we are tomorrow.”

The group behind the campaign, the National Youth Front, was no secret. It’s the newly formed youth wing of the white nationalist American Freedom Party, and it is only the latest in a growing number of racist organizations targeting youth on college campuses.

In recent years, groups like Youth for Western Civilization, formed by Kevin DeAnna, and the Traditionalist Youth Network, which emerged from a chapter of YWC founded on Towson University’s campus by Matthew Heimbach, have dominated the campus extremism landscape. At one point, YWC boasted 13 chapters, and TYN was making regular headlines for its racist activism at Towson and Indiana University.

But while those organizations have ties that run deep into the white nationalist movement, particularly to Jared Taylor’s American Renaissance, neither have ever served as a direct pipeline to a well-established hate group. NYF does exactly that, hoping that those they recruit in college, between the ages of 18 and 35, will help rejuvenate an already aging landscape.

According to William Johnson, AFP’s chairman, “NYF is an independent organization that will send members to the AFP. The end goal of recruitment is to make them [NYF members] nationalists and racially conscious.”

From the styling of its fliers to the sleek recruitment videos on its website, NYF seems to be modeling itself after other successful white nationalist youth movements, such as Generation Identitaire, the youth wing of France’s far-right, nationalist movement Bloc Identitaire, known for its large street demonstrations targeting the Muslim community in France. According to its former chairman, Caleb Shumaker, NYF is “march[ing] to take back our streets not by words but with action.”

“Our goal is to take power from those who have weaponized our institutions against us. To put an end to the invasions of our nations. To stop the ongoing defamation of our people. … To eliminate the endless ideological subversion of our nations most precious gift. Its youth,” read NYF’s stated goals. And according to the NYF posters found at ASU, “This is a declaration of war” – another line lifted directly from Generation Identitaire.

But that war hit a snag last month when Caleb Shumaker was forced out of his position as chairman.

“Due to recent attacks against me, my family and by those whom I believed would support and appreciate what we are doing, I feel it best to step down from my position as chairman of National Youth Front, and step away entirely from the organization,” wrote Shumaker in his resignation letter on the NYF website on January 6.

Johnson, in his discussions with Hatewatch recounted the reasons for Shumaker’s departure from the group differently. “Caleb Shumaker was forced out because of his interracial marriage,” Johnson said. “I was working with him closely, but there was a lot of backlash [because of his marriage] … from people who were not involved [in NYF].”

Shumaker, who declined to comment, was replaced by Angelo John Gage, a veteran of two tours of duty in Iraq, who has previously run for the U.S. House of Representatives in New Jersey as a candidate for AFP.

Gage has a long history of racism and anti-Semitism, including stints on The White Voice, a white nationalist website, and Stormfront, where he has written about realizing “the real Jewish question and the whole ww2 and hitler [sic] truth.”