"50 Shades": Not actually the end of civilization as we know it, guys 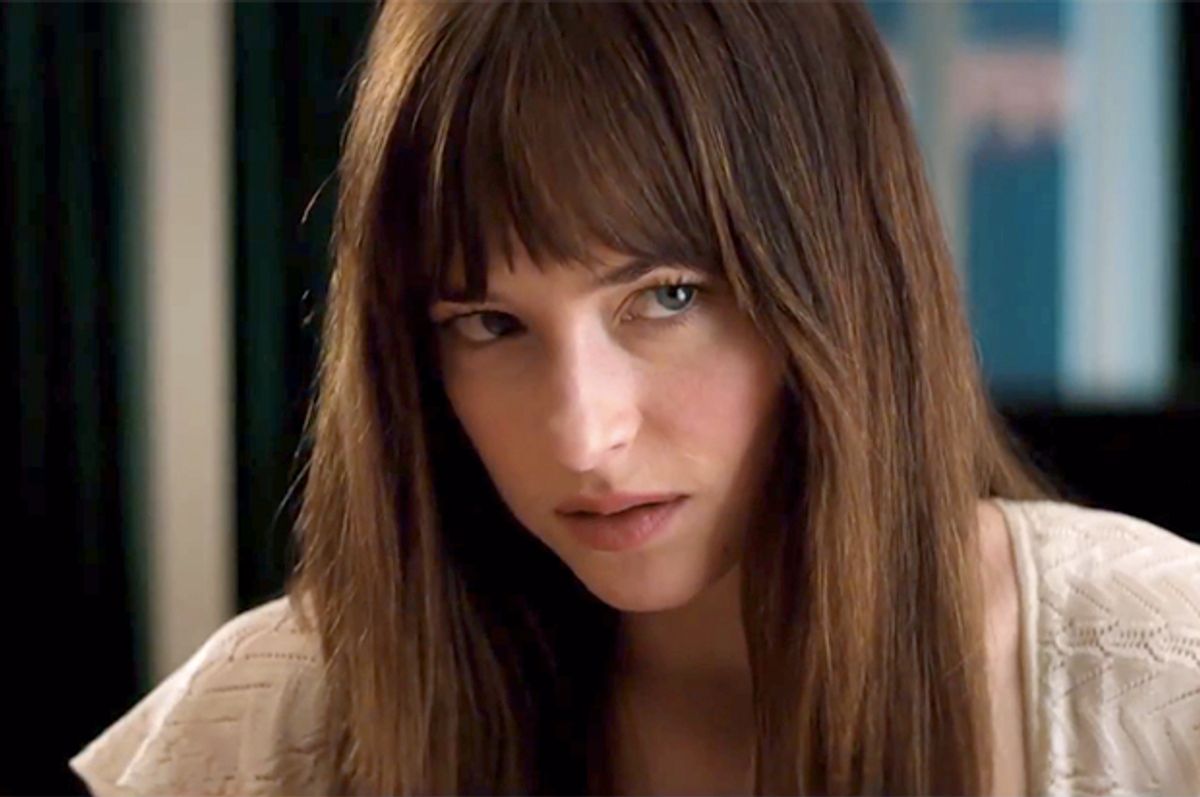 "Fifty Shades of Grey" is a silly movie based on a silly book, but if the film proves to be as big a hit onscreen as E.L. James' erotic romance trilogy was in print (over 40 million copies sold), then we can all expect to hear a lot of serious talk about it. Conservative groups have called the franchise unhealthy and un-Christian, feminists decry its depiction of a young woman in thrall to an abusive man, and everybody desperately needs to tell everyone else how bad they think the writing is. If you're about to pipe up now and assure the rest of us just how appalled you were by James' prose, for the love of God, give it a rest. You're almost as big a cliché as anything on the pages of "Fifty Shades of Grey."

Sam Taylor-Johnson's film adaptation is a far more competent work, although hampered by the constraints of James' lackadaisical plotting; in the movie as well as the book, even when stuff is happening it still feels like nothing is happening. Like "Twilight," the series that inspired it, "Fifty Shades" mostly details, to a nearly microscopic degree, the extended, incremental back-and-forth of the relationship between virginal college student Anastasia Steele and 27-year-old tycoon Christian Grey. In that respect -- that is, the respect of overanalyzing and fetishizing every tiny shift in the emotional climate -- it is incredibly girly. "Fifty Shades" was born in the sanctum of one fan's erotic imagination and fostered in the vast interior steppes of the Internet, where millions of women congregate to share similar transcribed daydreams, well out of the public eye -- if communities of such size can meaningfully be called un-public anymore.

"Fifty Shades," for all the BDSM sex that Christian introduces Anastasia to, is, like "Twilight," essentially a romance novel, and as such deploys a set of the genre's well-honed tropes. Romance fiction is the largest and most profitable sector of the publishing industry: 13 percent of the adult fiction market, 40 percent of all e-books sold, with earnings of nearly a billion and a half dollars per year, more than twice that of the next most lucrative genre, crime fiction. And yet "Fifty Shades" marks the first occasion in which a full-fledged romance fiction (as opposed to just a love story, like, say "The Notebook") -- in all the genre's wacky, reality-defying, cheesy glory -- has commandeered the big screens of malls across America. Surely some of the anticipatory derision heaped on the movie ("How long is this piece of crap?" I heard one man ask another at a screening before he'd even seen it) indicates a territorial response.

Still, many of romance's most ardent and articulate fans and defenders seem bemused by the "Fifty Shades" juggernaut: happy that their genre is finally flexing its mainstream commercial muscles but baffled as to why what they regard as a decidedly inferior specimen became the book to break out. In fact, I've yet to find anyone -- not among the handful of "50 Shades" fans I've met in person nor the dozens more I've encountered online, who'd argue that the books have any literary merit. No one thinks they're well-written (so get over yourself). The quality of the writing is simply irrelevant to the audience that has embraced these books.

This doesn't make it all that different from superhero movies that cater to young men's fantasies of possessing magical powers and saving the world in the company of women in skin-tight catsuits. Or Steven Seagal vehicles that offer an outlet to people who want to punch out everyone who annoys them and knock over fruit-vendors' stands with their sports cars. Or reality TV shows that give viewers the chance to sneer at vulgarians who don't have the sense not to make jackasses of themselves in front of a camera. Most of these forms of entertainment tend to be clumsily made, implausible examples of shameless wish-fulfillment. One of the things that makes pop culture so popular is its willingness to cater to our most atavistic and childish yearnings, and when it does so, artistry seems beside the point.

For this reason, "Fifty Shades" presents reductive social commenters -- the kind of people who believe audiences approach all fictions as if they were designs for living -- with a conundrum. Social conservatives may deplore the story's kinkiness, yet Anastasia's ultimate goal is to get Christian to settle down and form a highly conventional nuclear family with her, which is good, right? In the social-justice camp, even more ideological contortions are required. "Fifty Shades" was not just written by a woman, but nurtured in the female-dominated fan fiction community, first published by a woman-run digital press and boosted to international success by a female fan base who spread the word from one reader to the next before Random House finally stepped in to publish the print version. In no way can it be viewed as a retrograde vision of women's sexuality foisted upon them by a male-dominated entertainment industry. "Fifty Shades" is a veritable poster child for self-actuated women's culture.

And yet, and yet. Christian is so domineering, jealous and stalky: ordering Anastasia to eat, growling when she shows affection to male pals, turning up uninvited when she's spending time with family and friends, having her followed by his minions, orchestrating her career behind the scenes. As with Edward Cullen in "Twilight," who liked to sneak into Bella's bedroom and watch her sleep, he exhibits the personality traits of a controlling abuser. From the very beginning, James' series has drawn fire from both left and right for "glamorizing" such behavior, making for some mighty strange bedfellows. (Oh, the irony of conservative church leaders -- the very personification of the patriarchal -- condemning the series for promulgating "abuse of power" and "female inequality"!) In the U.K., an advocate of domestic violence argued that the books are a veritable "instruction manual for an abusive individual to sexually torture a vulnerable young woman."

Certainly some women with histories that leave them particularly sensitive to such depictions have and should skip "Fifty Shades," and there's no reason why they shouldn't make their displeasure with the books and film heard. Furthermore, in the case of a series like "Twilight," which is intended for young girls with little or no relationship experience, concerns that they might absorb some false notions of romantic love seem well-founded. Yet it's difficult to imagine the sort of reader "Fifty Shades" is intended for and largely read by -- older, married women, often with children -- making such a mistake. The point of the series is that it presents scenarios that are in every respect completely the opposite of these women's lives: The heroine is young and innocent, the hero is fabulously rich and powerful yet has oodles of time on his hands to court her, and despite a lifetime of avoiding commitment, he soon professes himself to be utterly devoted to her.

Another line on the "Fifty Shades" phenomenon comes from Katie Roiphe -- a commentator already on the record as being turned on by the idea of financial dependence on a man -- who thinks that the series' success proves that women are not only turned on by being financially dependent on men but secretly long to give up the autonomy they gained via feminism. Like the "instruction manual" theory, this notion is based on a fundamental misunderstanding of what a romance novel is and the pleasures it is meant to provide. It is a confection reserved for "me time," not a picture of real life; it is a playpen for the libido. True, there are probably some halfwits out there who truly believe that people just like Anastasia and Christian exist, or that scenes and situations like those in "Fifty Shades" actually take place somewhere on the planet, but please: The vast majority of the audience for this stuff really does know better.

At the root of all this wild surmising is a confusion about women's desires -- which tend to be better stimulated by narratives than by pictures -- and a pervasive misunderstanding of sexual fantasy. Self-help books often urge couples to realize long-harbored fantasies as a way of revitalizing their relationships (the theme of an amusingly painful interlude in the HBO series "Togetherness"), taking for granted that all such erotic daydreams ought to or can be acted out. But fantasies run a gamut from 1) things you have already done to 2) things you would happily do given the right circumstances to 3) activities you would only want to perform in a theatrical, role-playing arrangement to 4) the stuff you would never want to do at all because it would be unpleasant, dangerous, have draconian moral, social or legal consequences or is simply impossible. Part of having an adult sexuality is understanding this continuum and where your own desires and dreams fit on it.

Nevertheless, the idea persists that if someone enjoys fantasizing about something they must really want it to happen. Or, rather, we seem more inclined to believe this of women, perhaps because throughout history men have chosen to view women's desires as elusive, obscure and mysterious. It's common knowledge that the clients who seek out the services of professional dominatrices tend to be judges, bosses, politicians and other powerful men, presumably because they find sexual submission a welcome and gratifying respite from the responsibilities that come with such authority. Yet we don't assume that the same men long to give up their titles and influence to become full-time houseboys. Freedom, as Simone de Beauvoir pointed out in "The Second Sex," is a mixed bag, but acknowledging that doesn't amount to wishing one's freedom away.

Christian, it should be noted, doesn't just order Anastasia around. He treats her the way a parent treats a child: hovering protectively, meddling in her life, hectoring her to do what he thinks is best for her, and, yes, spanking her. She does push back -- as most romance heroines do when they meet their alpha male, since part of the fantasy (and if you ask me, the most outlandish part) is that powerful men enjoy being challenged by young women and come to respect and appreciate those who stand up to them. But her resistance is a sort of disguise that covers up the pleasure she (and the reader) takes from his masterful behavior, his desire for her and his determination to keep her safe. Like any child, she can do whatever she wants and she'll still be loved and tended to.

Is it any surprise that women who most likely have to both care for children and manage employees sometimes fantasize about being relieved of such duties and anxieties? If the vehicle for those fantasies is a shoddily written series of novels, well, the world is full of people who are capable of enjoying both lame porn and great films. The two appetites are not mutually exclusive. That some people indulge in them doesn't signify the fall of Western Civilization, a susceptibility to real-life victimization or, for that matter, open season on deriding anyone whose taste in crappy pop culture differs from your taste in crappy pop culture. The fans of "Fifty Shades," as Donna Summer once put it, work hard for the money, and if this is how they want to spend it on their nights off, I say we let them do it in peace.