Draft Warren campaign's amazing push poll: What are they trying to prove?

Activist groups are still trying to convince Elizabeth Warren to run. But their latest survey is laughable 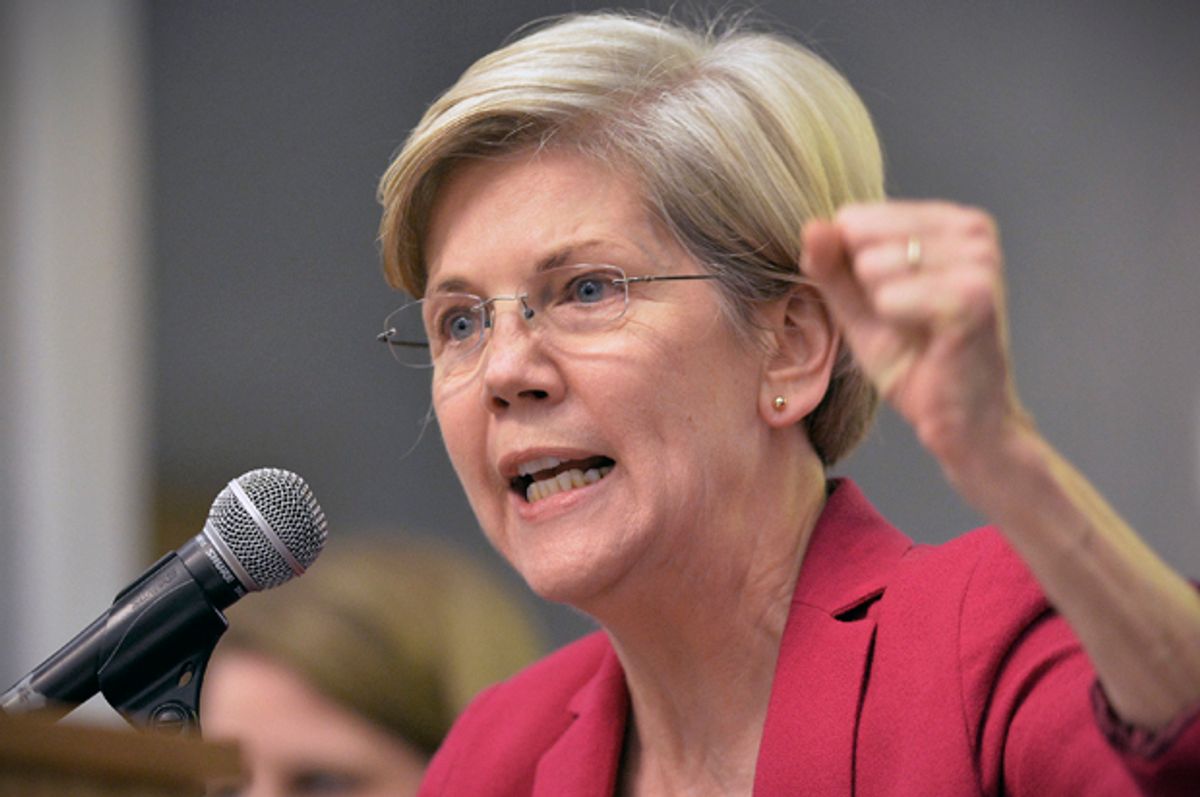 This is an unlikely effort, given the aforementioned fact that Elizabeth Warren herself has ruled out a presidential campaign.  But the people behind Run Warren Run believe that if they can prove to Warren that there's enough support out there for her campaign to succeed, they can change her mind. (They may also believe that constantly using Elizabeth Warren's name helps their organizations raise money, but they get all hot and bothered when you suggest that.)

A new YouGov poll commissed by MoveOn Political Action, as part of the Run Warren Run effort, alleges to show a "huge opening for Elizabeth Warren in Iowa and New Hamsphire." Indeed it does! And not just an opening -- it shows Elizabeth Warren beating Hillary Clinton in both Iowa and New Hampshire among likely Democratic caucus-goers and primary voters, respectively. "After respondents hear about Senator Warren’s positions and biography," MoveOn's statement reads, "without any negative information provided about other candidates, Elizabeth Warren leads all other potential candidates for the nomination in both states: 31% to 24% over Hillary Clinton in Iowa (with other potential candidates further behind) and 30% to 27% in New Hampshire."

Well golly, if this poll is to be believed, Elizabeth Warren should swoop into the race right now. Hillary Clinton can shrug her way back home to Chappaqua in shame and failure, now that a YouGov poll commissioned by MoveOn showed her losing, like a loser.

So... about this poll. Credit to MoveOn for being transparent and sharing its methodology. On the other hand: oh my god, this is hilarious. We can't believe they would share this! It's the fluffiest poll since whatever the last really fluffy poll was.

See the survey for yourself. After gathering some initial information, we arrive at question 6: what do you think about Elizabeth Warren? Respondents are all, she's pretty cool, I guess? If there was any doubt in these voters minds that Elizabeth Warren isn't the best politician/homo sapien in global history, questions 7 through 17 seek to firm it up. A sampling:

9. Elizabeth Warren is critical of big banks that have successfully blocked parts of the Wall Street oversight law that passed Congress, called Dodd-Frank. She says, "There’s a lot of talk coming from Citigroup about how the Dodd-Frank Act isn’t perfect... I agree with you. Dodd-Frank isn’t perfect. It should have broken you into pieces." Do you agree or disagree with this statement?

16. Elizabeth Warren says she grew up "on the ragged edge of the middle class." After her dad suffered a heart attack and the bills piled up, she started waiting tables at age 13. Her mom got a job at Sears, and Warren says, "That minimum wage job saved our home – and saved our family ... Sure, I worked hard, but I grew up in an America that invested in kids like me, an America that built opportunities for kids to compete in a changing world, an America where a janitor’s kid could become a United States Senator. I believe in that America." Is this a convincing reason to support Sen. Warren?

17. After the 2008 financial crisis, Time Magazine called Elizabeth Warren a "New Sheriff of Wall Street" based on her Congressional oversight work to hold Wall Street accountable. And Warren led the charge to create the Consumer Financial Protection Bureau, which has helped Americans that have been ripped off recover more than $1.5 billion. Is this a convincing reason to support Sen. Warren?

After reading likely Democratic caucus-goers and primary voters this delightful press release in the form of a survey, we get to question 18: "Would you like to see Elizabeth Warren run for president in 2016?" Sure why not! they all say. And by question 19, there's Elizabeth Warren, leading Hillary Clinton by several percentage points.

There's a scientific term for this type of survey, can't quite think of it now, but it's not a kind one. The gist of it is "when your survey spends 11 questions puffing up someone into a quasi-deity and then immediately asks if people like that person, it's not a very useful survey." This isn't how an election plays out. When New Hampshire Democrats enter the polling station on primary day, the voting machine will not read them a glowing profile of Elizabeth Warren before displaying the ballot. (Although who knows; these machines sometimes go on the fritz.)

Even if this survey is laughably rosy, though: is there "space" for Elizabeth Warren to run? Sure! Democratic operatives, including the ones in the Clinton camp, pretty universally view her as the only other Democratic figure who could put a scare into Hillary Clinton. It's ironic, though, that the best evidence that there may not be any space for Warren are, well, the turnout figures at the actual Draft Warren events.

The idea that there's "space" for Warren -- mostly likely a second-place "space" -- is not the issue here. The issue is that She Does Not Want To Run. That doesn't seem like a feint. She seems genuinely satisfied with her position in the Senate as a commanding Democratic voice on financial issues. She doesn't seem at all interested in developing the foreign policy platform necessary to run for president. She's uncomfortable talking about foreign policy. When pressed, she'll say something like, Uhh... go Israel...??

It's just not clear what MoveOn is trying to prove, other than its ability to produce the sort of questionable data that fits its own efforts. Yes, people like Elizabeth Warren. No, she doesn't want to run for president against Hillary Clinton. Maybe it's time to -- YES I'M GOING TO WRITE IT AND YOU CAN'T STOP ME -- move on. Rally around a progressive figure who is actually considering running, like Bernie Sanders.