GOP’s “manly firmness” is making us sick: How the assault on Obamacare punishes women and poor people for needing care

A GOP lawmaker uses caveman logic to attack Obamacare. Here's why he's not an anomaly in his party 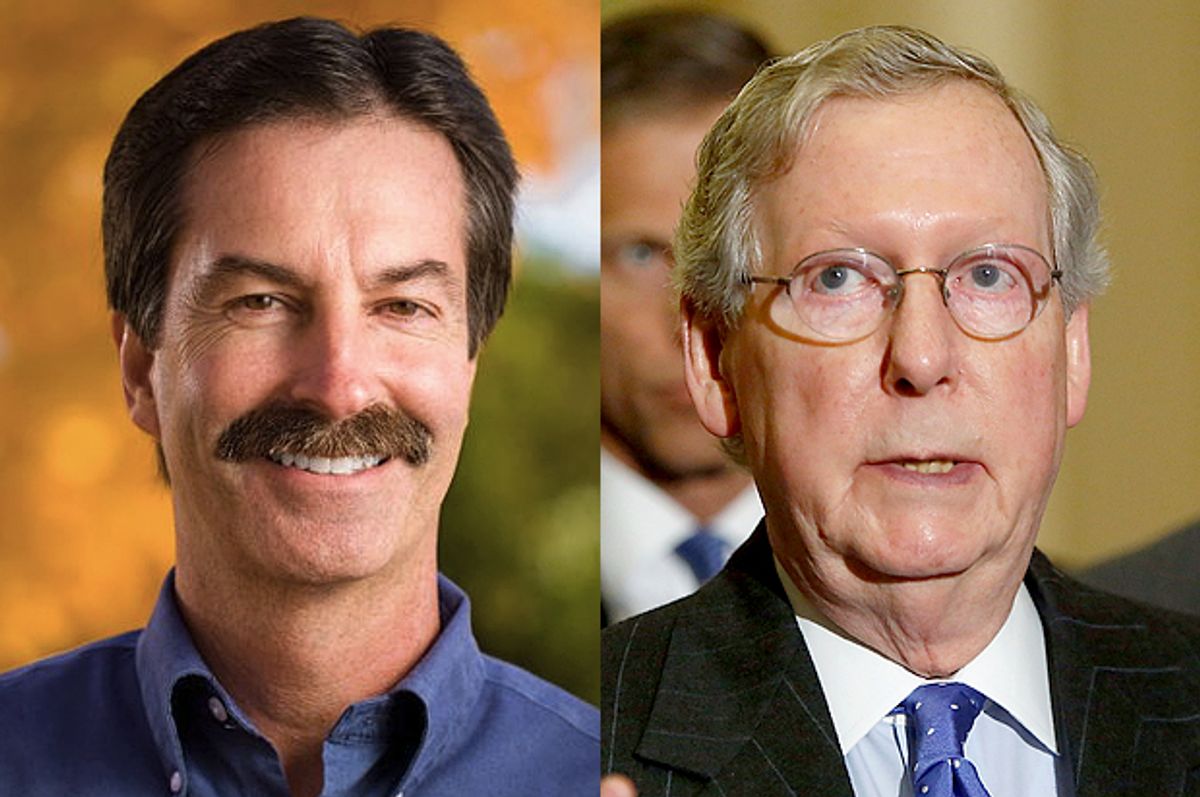 A Missouri lawmaker this week sponsored a resolution calling on his state’s congressional delegation to man up and repeal Obamacare already. No, seriously. Here’s the text of Republican state Rep. Mike Moon’s proposal:

Now, therefore, be it resolved that we, the members of the Missouri House of Representatives, Ninety-eighth General Assembly, hereby insist that each member of the Missouri Congressional delegation endeavor with “manly firmness” and resolve to totally and completely repeal the Affordable Care Act, settling for no less than a full repeal.

Sen. Claire McCaskill responded to Moon with the delightfully blunt observation she didn’t believe a person proved their manhood “by kicking folks off their health coverage and once again letting insurance companies discriminate against women and sick people.” Not that it’s stopped plenty of the new healthcare law’s most staunch opponents from trying. And far from being ideological bluster, Republican intransigence on public health is making people -- particularly women -- sick.

In Tennessee last week, the Senate Health and Welfare Committee rejected a proposal from Republican Gov. Bill Haslam to expand Medicaid to nearly 300,000 low-income Tennesseans. The proposal included market-based elements and Tennessee hospitals had agreed to cover the state's portion of the bill. It was essentially a version of the Medicaid expansion that was tailored to address Republican skepticism, but it still failed to pass a committee vote.

“The idea that there would be no state dollars [involved], I just don’t find that realistic,” said Republican Rep. Jeremy Durham, reiterating a common talking point among state conservatives hostile to the proposal.

Tennessee is currently the only state in the country that has a law explicitly criminalizing people for their pregnancy outcomes. They also drug test Tennesseans who receive public assistance, even though these tests are a pointless, discriminatory waste of money. But many opponents of the Medicaid expansion don’t see increased health coverage as connected to, or a possible alternative to, punitive laws that prosecute and criminalize people for lacking necessary access to care.

Last year, I asked Republican state Rep. Terri Lynn Weaver if she thought the dearth of drug treatment facilities that treat pregnant patients and the lack of affordable healthcare in her state gave her pause as she introduced a measure to criminalize pregnancy outcomes. “The drug courts continue to be the answer for these women. They are what we have right now,” she said, redirecting the conversation to the courts, not healthcare. “I don’t know what to say about [how] some [women] have insurance and some do not. It’s a terrible thing, but I don’t want to get into that because that’s another subject.”

Anti-choice lawmakers in Kansas right now likely think that their current budget deficit -- a $344 million hole that is now eating up education funding, vital repairs to infrastructure and pensions -- as being another subject, too. But gaps in reproductive health coverage that are a direct product of the Legislature’s years-long assault on contraception and abortion rights are directly related to the fiscal health of their state, not to mention the very literal health of women and girls in Kansas.

And in Colorado, a Republican lawmaker is pushing to end a wildly successful and cost-effective program that provides low-income women and girls with long-acting IUDs at no cost. The plan helps teens and young women who don’t want to be pregnant access the contraception they want and need -- and has saved many, many millions of dollars in the process.

As Nick Baumann reported at Mother Jones on Wednesday, the state estimates the program, between 2010 and 2012, saved Medicaid between $49 million and $111 million and reduced the pregnancy rate among women ages 15 to 19 by 42 percent. But Republican state Sen. Kevin Lundberg wants to kill the program because he believes IUDs, long considered the gold standard in pregnancy prevention, are abortion-inducing devices. (He is wrong, by the way. For more on how IUDs work as birth control, see here.)

Meanwhile, a group of Republicans in Congress, including Utah Republican Sen. Orrin Hatch, have introduced an alternative to Obamacare that excludes contraceptive coverage and maternity care, which they have deemed non-essential and too costly. But lawmakers have clear data on the cost-saving impact of affordable reproductive healthcare. The “manly firmness” lawmakers like Moon are calling for has nothing to do with fiscal responsibility or the interests of their constituents. Instead, the move to repeal Obamacare and block successful state-level programs is driven in large part by a punitive, regressive opposition to reproductive freedom. But, as McCaskill noted, there is nothing manly about wasting taxpayer dollars and punishing women and sick people for needing basic care.