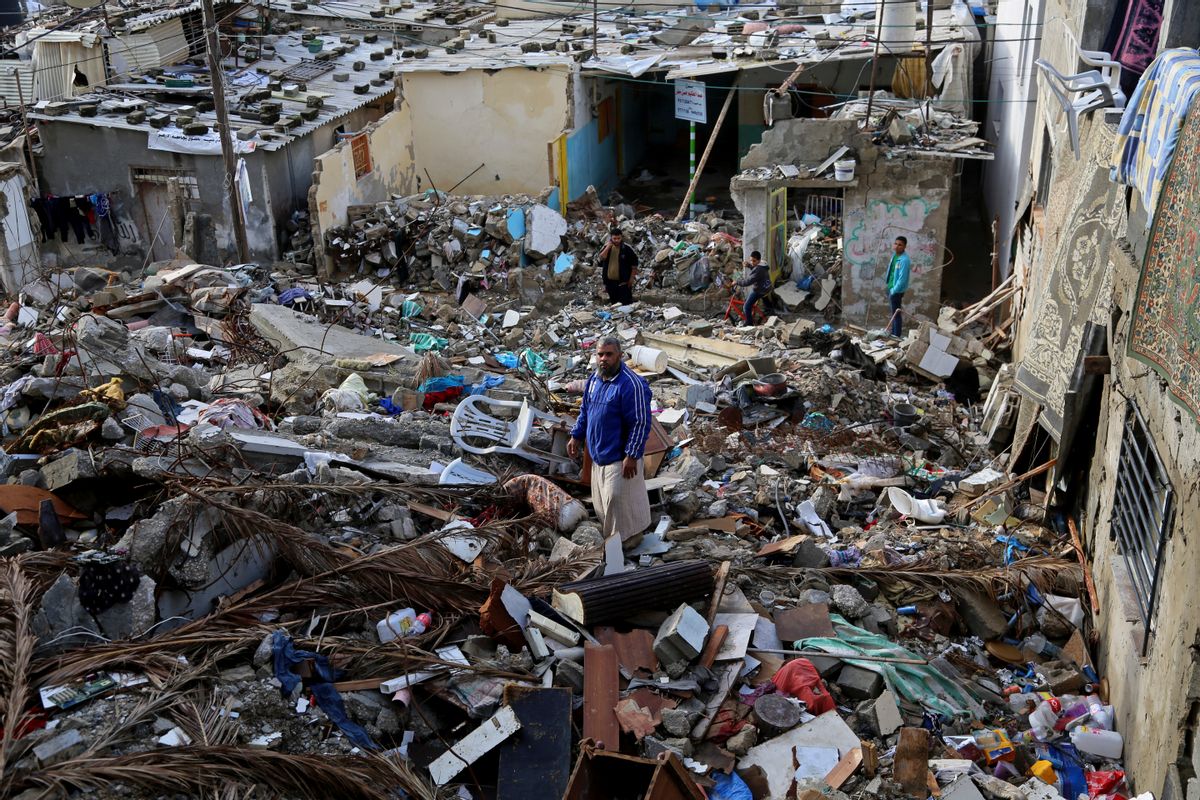 In this Tuesday, Nov. 25, 2014 photo, Mohammed al-Bakri, stands on the rubble of his family home in the Shati refugee camp in Gaza. The Aug. 4 airstrike killed six people, five of them relatives. Two of those killed were members of the militant group Islamic Jihad. Israel carried out scores of attacks on houses during its summer war with Gaza militants, alleging militants used them for military purposes. Palestinians say Israel's warplanes often struck without regard for civilians. (AP Photo/Adel Hana) (AP)
--

Associated Press reporters reviewed 247 strikes and found that sixty percent of those who died were children, women and older men.

Despite a multination brokered agreement, Washington is still considering whether to give arms to Kiev and slap fresh sanctions on Russia.

3. WHAT OBAMA IS DOING REGARDING CYBERSECURITY

Responding to data breaches and cyberattacks, the president heads to a Silicon Valley summit to try to spark alliances between policymakers and tech innovators.

4. BOTH AL-JAZEERA JOURNALISTS RELEASED FROM PRISON

Mohamed Fahmy and Baher Mohammed are freed pending a retrial after spending more than a year in an Egyptian jail on terror-related charges, a case denounced by rights groups.

5. HOW A FEDERAL AGENCY MAY BE IMPERILED

Political differences in Congress over immigration reform may lead to the shutdown of the Homeland Security Department.

Seven Harvard graduates were CEO when their companies went public, more than twice the amount of the next-best schools, a tracking firm finds.

7. 'THE FINEST MEDIA REPORTER OF HIS GENERATION'

That's what the New York Times' executive editor says about the late media columnist David Carr, famed for chronicling a brutally honest memoir about his fight with drug addiction.

8. BE MY VALENTINE, WITH CAVEATS

Thailand braces for Valentine's Day with warnings, a new hashtag and calls for morality.

An app will allow fans of the Westminster Kennel Club dog show to get a live look at all 2,711 pooches at the popular pageant.

10. WHY BRIAN WILLIAMS MAY NOT BE ALONE IN EMBELLISHING

Experts say the suspended "NBC Nightly News" anchor is far from the only one in puffing up experiences, something many do for myriad reasons.