The military sees climate change as a national security issue. What will it take for the right to accept reality? 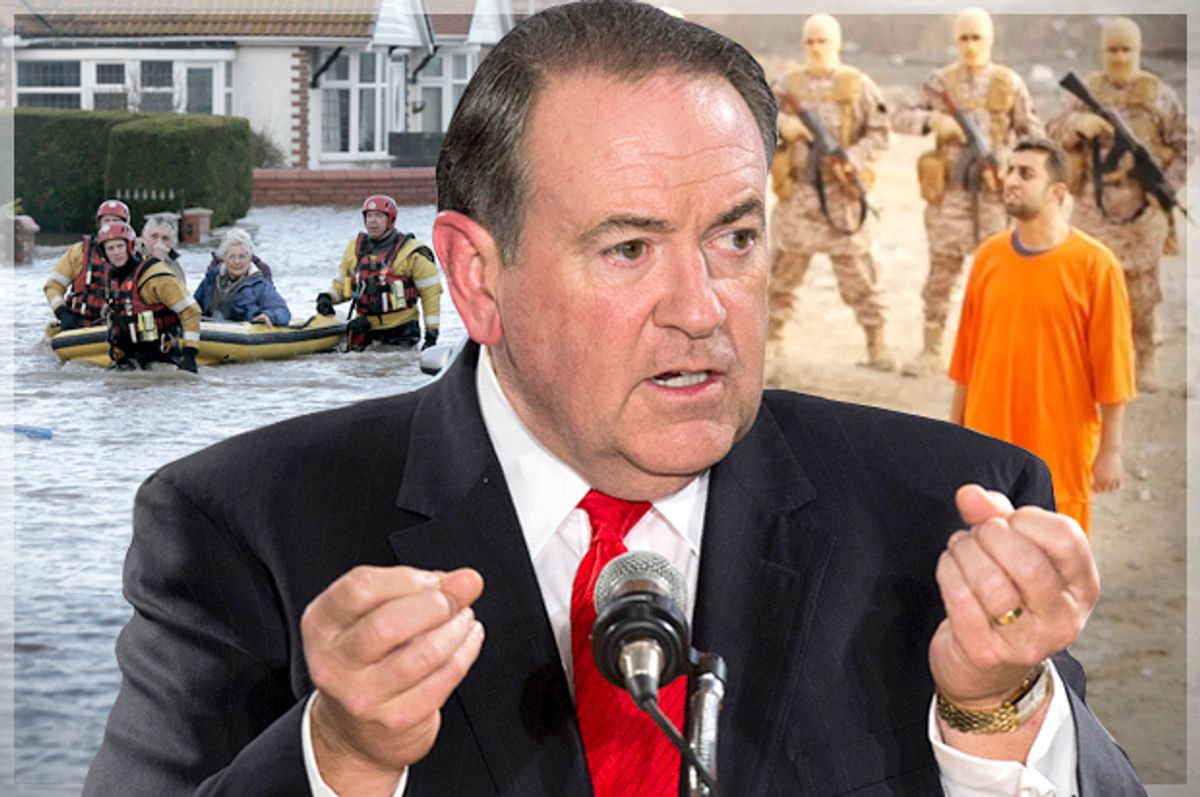 Global pandemics, nuclear weapons, terrorism ... and climate change. The Obama administration last Friday released its 2015 national security strategy, which listed, alongside the usual suspects, the "urgent and growing threat" of a changing climate.

The inclusion of a phenomenon already treated (if not deservedly so) as controversial was bound to ruffle feathers. And that was before the White House stepped it up a notch, suggesting that climate change is not only a threat on par with that of terrorism, but perhaps even worse.

This line of thinking stems from a small moment that occurred during his recent Vox interview, in which President Obama said that the media "absolutely" overstates the dangers of terrorism as compared to those of longer-term problems like climate change. Following up on Tuesday, White House press secretary Josh Earnest backed that statement, explaining: "The point that the president is making is that there are many more people on an annual basis who have to confront the direct impact on their lives of climate change or on the spread of a disease than on terrorism."

The knee-jerk reaction to such an idea can best be summed up by potential Republican 2016 presidential candidate Mike Huckabee, who, in defiance of a basic understanding of both national security strategy and the effects of climate change, has quipped, repeatedly, that "a beheading is much worse than a sunburn." Huckabee's comment entirely misses the point, but the sentiment (or, if you want to be cynical about it, the political savvy) that's driving it is understandable: It's going to be difficult, if not impossible, to convince people that climate change, with its dense scientific papers and endless diplomacy, is scarier than ISIS.

The White House, for what it's worth, is absolutely correct in stating that climate change kills more people than terrorism: Rebecca Leber at the New Republic points to a 2012 report, commissioned by 20 countries, that added up the impacts of food insecurity, nutrition and water safety to arrive at an annual climate change death toll of 400,000 -- and nearly 5 million if you count the direct health impacts of fossil fuel emissions. The 2014 Global Terrorism Index, by comparison, counted 18,000 deaths in the peak year of 2013, and 100,000 in total over the 13-year period studied.

But adding up death tolls isn't necessarily the most constructive way to convince the greater public that climate change is something worth taking seriously. It's like trying to compare apples to...something pretty similar to apples, but which also helps those apples grow and flourish. Compost, maybe? The point is, aside from being considered a threat in and of itself -- many of the United States' naval bases, for example, are vulnerable to rising sea levels -- climate change, from a national security perspective, is what's typically described as a "threat multiplier." It's an underlying factor that can exacerbate risks already in place -- things like food, water and energy insecurity -- creating the sort of conditions that lead to unrest, instability and, consequently, terrorism. The great example of where that very chain of events is already in play is in the Middle East and North Africa, where drought begat water shortages and contributed, some experts argue, to Syria's civil war and the rise of ISIS.

“I don’t think it’s necessarily helpful to try to disentangle these risks or rank them,” Franceso Femia, the founding director of the nonprofit Center for Climate and Security, told Salon. But, he added, "it’s fair to say that climate change should be treated in a very similar way to these other risks that we hear about all the time.”

That we still don't tend to think of climate change in this context could be because, as Obama suggested to Vox, it's not a very "sexy" story. It also poses problems of a very different nature from what we tend to picture in our nightmares. "It's not a threat like ISIS or ISIL, where somebody is targeting you and just you and just to do you harm," David Titley, a retired Navy rear admiral and a professor of meteorology at Penn State, told Salon. "It's the environment -- land, air, ocean -- in which we operate. And it's changing."

Sexy or not, the military has recognized the climate threat for a while now. Last October, the Pentagon released a report calling climate change an "immediate threat" to national security, citing its contributions not only to terrorism, but to infectious disease, global poverty and humanitarian crises as well. It was, the New York Times reported, one of the first indications that the military was thinking about climate risks along those broadened parameters. That it also lent weight to Obama's efforts to negotiate a global climate agreement in Paris at the end of this year does not, however, mean that it was politically motivated. After all, it was in 2003, under the climate-denying Bush administration, that the Pentagon first released a report examining the worst-case scenario impacts of climate change, which even then it characterized as having the potential to "prove a greater risk to the world than terrorism."

The 2003 study flirted with the apocalyptic: It warned of a scenario in which "once again, warfare would define human life." But, according to Titley and Femia, the military is simply treating climate change the way it would assess any risk -- which is to say, it's working off of the best available information to evaluate the probability of a threat occurring multiplied by its potential consequences.

“For the Department of Defense, at the end of the day, it’s all about being ready,” said Titley. “Just as we are ready to fight and defeat an adversary, if deterrence fails, we need to make sure that all of our training, all of our equipment and all of our infrastructure works -- no matter what Mother Nature throws at us.”

To a civilian like me, that doesn't sound like what Huckabee's ilk might call "alarmist." It sounds like good policy, and it's a reassuring indication that, while Congress wastes its time debating whether human activity has anything to do with the changing climate, the military has accepted the science and moved on to figuring out how it can use that information to protect us.

And while we're not likely to win anyone over by arguing that climate change is the new ISIS, that the military is treating it as such should be reason enough for the rest of us to trust that it's a legitimate threat. "The fact that our top military generals and admirals are elevating climate to one of their lists of concerns speaks volumes to me to the fact that this is an issue that, perhaps, needs to move beyond the policy debate stage and needs to be considered on those merits," Marshall Shepherd, a meteorologist and the co-author of a 2011 National Academy of Sciences report on the national security implications of climate change, told Salon. "These folks don't play around and worry about hoaxes."