Adultery for adults: Lies, infidelity and the fantasy of cheating 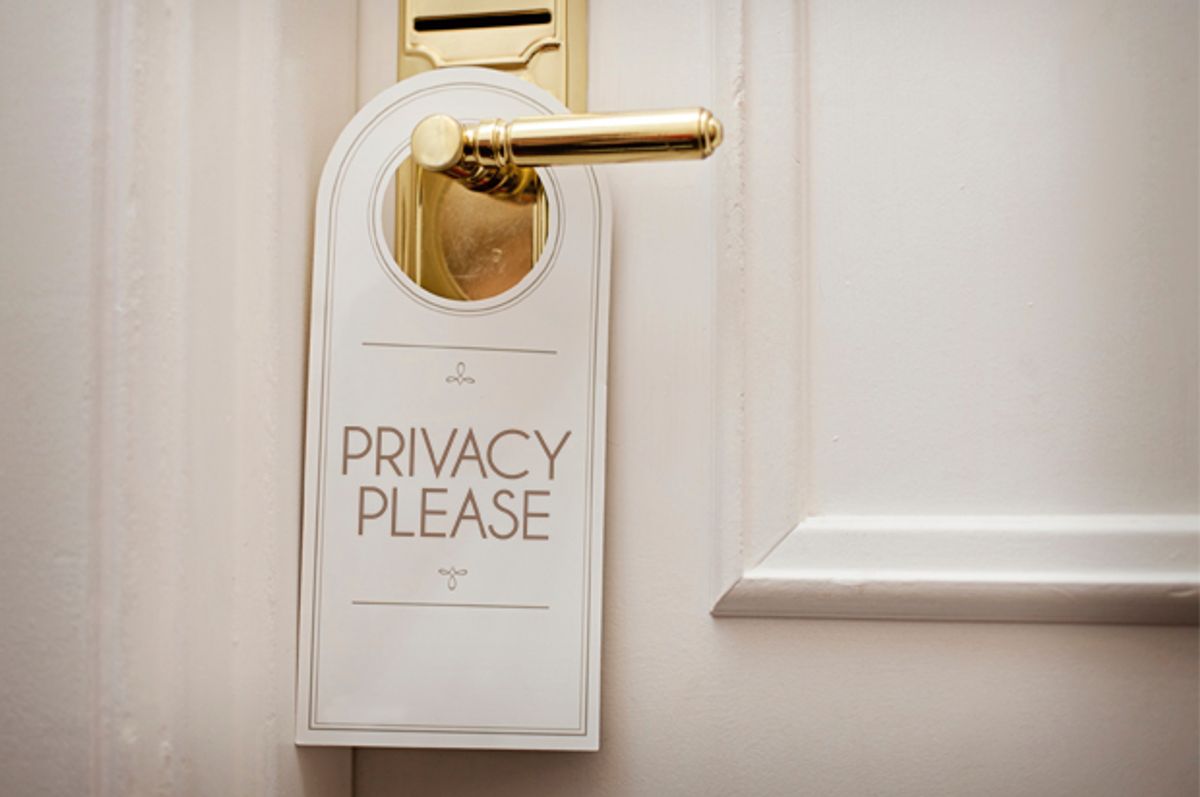 Excerpted from "LOVE AND LIES"

It was September 2000, and three of us were sitting on the steps of Waggener Hall in the warm Texas sun, arguing about the German philosopher and mathematician Gottlob Frege. I was pretending to smoke because the beautiful, long-haired, long-legged twenty-one-year-old I had my eye on was a smoker. I didn’t know yet that she was twenty-one, which was lucky for us both, because I don’t think I would have had the nerve to ask out a woman twelve years younger than I was. I was back at UT Austin, attending the graduate school I’d dropped out of seven years before to go into the jewelry business. One of my friends from the old days was still there — he’d known my first wife, in fact — he was finishing his dissertation, and he actually knew something about Frege. I was sure the twenty-one-year-old had her eye on him. She later confessed to me that she had guessed I was gay.

On our third or fourth date a strange thing happened to me. I was standing in the men’s room at a coffee shop called the Spider House. I was checking my look in the mirror when I had a vision. There’s no other word for it. I had had visions before. I came back to the table and sat down.

I had a beer, and she had an iced coffee. We were in a booth, and she was sitting across from me. “There’s something I have to tell you,” I said.

“What?” she said. She was quiet at this time. Later, when she knew how much I loved her, she became the talker.

“I just saw something. I suddenly saw that we are going to be married and have two children together.”

“What do you mean, you saw something?” she said. She was sane and skeptical.

I told her what I had seen, and it all came true. About eighteen months later we were married. Not long after that, after I had started teaching at the University of Missouri–Kansas City and she had started law school at KU, our first daughter was born; about two years later, as she was finishing law school, our second daughter was born. And on July 24, 2012, our divorce was finalized. Two daughters, just like the vision. Curiously, the whole ten years we were married, I also knew that it wasn’t going to last. I think she knew. Our marriage had the feeling of a very important game we were playing together that had to come to an end. And it did when I cheated on her after I’d been sober for a year and we’d been together for ten.

The adultery was exposed quickly — after about a month of constant lying on my part — and there was no sincere attempt by either of us to put things back together. She threw me out of the house, and a new, harder life began for us and for our two daughters, who were at that time aged six and four, and for my eldest daughter, from my first marriage, then sixteen.

When my second wife and I first started dating, I told her: “One day you might cheat on me, and I want you to promise me that if that happens, you will lie to me about it.” She thought it was bizarre and unhealthy at the time, but I still stand by it. The problem of course of sticking your head in the sand like this is that a hyena can come along and bite you in the ass. As it turned out, she was not the cheater; I was. But suppose for a moment that she had been. Would my policy have been a sensible one? What if, contrary to my express wishes, she confessed early on, while there was still time to save things? What if by encouraging her not to confess — making her promise — I was creating the future circumstances that could allow her to fall in love with someone else? I was quick to add: “But if it turns serious, then of course I would want to know.” But by then it might be too late. By then, many of us know from hard experience — whether we are the cheaters or the cheated upon — it usually is too late.

And what about the coerced confession? Usually there is at least some coercion in any confession of infidelity: a question about a strange phone call, an e-mail “I opened by accident,” a text you forgot to delete before your real lover — the one you are cheating on — borrowed your phone. “My friend said she saw you at a restaurant with ———. Weren’t you working late that night?” Fight or flight: we usually put both to work, deploying indignation and lies on the spot. But then the decision process starts.

Here again, the thought of Adrienne Rich is useful. While offering a nuanced account of truthfulness, she also correctly argues that lies and secrets always undermine what we are really seeking when we love. For Rich, it may not always be possible to be truthful, but when we are seeking to create intimacy, we are at least trying to move in the direction of truthfulness and openness.

By contrast, when we lie, as we saw when we considered the lies of children, we are affirming our independence in a way that may threaten the intimacy of love. Because I myself have been a secret drinker and I understand that mode of deception, I like the way Mary Karr puts it in her memoir: “If you lie to your husband — even about something as banal as how much you drink — each lie is a brick in a wall going up between you, and when he tells you he loves you, it’s deflected away.”

Now, as any alcoholic will tell you, there’s nothing “banal” about how much you drink if you’re the sort of person who is already lying about his or her drinking. On the contrary, you are lying about one of the most important things that are taking place in your life at that time. And for Adrienne Rich, who admits that many truths are too trivial to concern us as far as our intimacy is concerned, a truth about “how much you are drinking” would count as a vital truth in the development or discouragement of intimacy between two lovers.

So much turns on what we mean by the most important truths. There is a new category of infidelity that seems to be growing in social currency (and, probably, popularity of practice): the so-called emotional affair. The emotional affair occurs when we establish a high degree of intimacy — and probably flirtation — with a potential lover, a level of intimacy that we know would be unacceptable to our partner (and which we may or may not have with our partner, depending upon the present state of the relationship). An emotional affair need not be a prelude to an actual affair, but it certainly looks like a violation of trust; it is the creation of a world of secrets that are emotionally relevant to the marital relationship.

Suppose that you are in an emotional affair. Now contrast that emotional affair with your sexual fantasy life. When we think about our own sexual fantasies, we recognize how harmless they are yet also how damaging they could be if revealed to our spouses. If, however, we think about our partners’ sexual fantasies — the people we suspect they might involve, most upsettingly — we can bring ourselves into a rage of jealousy or a despair of insecurity (even if this rage or despair remains, and should remain, entirely hidden from our partners). “What is harmless and innocent when it takes place in my mind is dangerous and morally blameworthy when it takes place in yours.” (The psychological plausibility, the evident ordinariness of even this modest piece of hypocrisy shows us how important it is for us to become more open-minded and honest about the possibilities and perhaps inevitability of deception and self-deception in marriage.)

The emotional affair is similarly kept secret from one’s partner, but there is a crucial difference: it involves direct, emotionally fraught interaction with another real person. That other human being seems to fall within the realm of most important truths. But these matters get so complex so quickly. If we are straight women, are we having emotional affairs with our girlfriends? But does that mean we can’t have friends who are men? And won’t our friendships always involve secrets that we keep from our spouses (if only minor secrets like: “God, I wanted to slap him today because . . .”)?

We might suggest that our ordinary friendships don’t tend to intrude into our sexual consciousness; our emotional affairs, by contrast, always have the dangerous, seductive aroma of the erotic clouding them. The transition from friendship to emotional intimacy to the “must-be-revealed important truth” of the emotional affair, then, might not be so very different from the “important truth” of a real affair. The only difference may be that what is about to happen hasn’t physically happened yet. How long might we cling to precisely that self-deceptive fact that “nothing’s happened!” just because nothing physical has happened? The purpose of clinging to that belief is obvious: to persuade ourselves that our partners need not — indeed, should not, for their own sakes — know about this relationship, which is, after all, “really just a friendship . . .” (Wait, how many texts did I send her today? God, I don’t even want to look.)

I think it is because the mind is so creative, so adept in its fantastical prestidigitation, so expert at visualizing the not-yet, the better-not-be, the never-will-be, the impossible that we make the sensible moral division between imagining sex with someone else and actually having it. When we were talking about cheating and the most important truths above, I think we mean at the very least to include actual acts of having sex with someone else — or for that matter any instance of physical intimacy — among the most important truths. According to Matthew, Jesus taught: “Ye have heard that it was said by them of old time, Thou shalt not commit adultery: But I say unto you, That whosoever looketh on a woman to lust after her hath committed adultery with her already in his heart” (Matthew 5:27 – 28). Here again, we run up against our old enemy “the truth and nothing but the truth, so help me God” or “pure transparency” or “love as a ladder to the knowledge of the truth”: if a married person sincerely believed that his fantasy life amounted to the same thing as adultery — or suspected that his spouse had a robust fantasy life and so was engaging in adultery — marriage and romantic love would be impossible.

Clancy Martin is the author of the novel How to Sell (FSG, 2009) as well as many books on philosophy, and has translated works by Friedrich Nietzsche, Søren Kierkegaard, and other philosophers. A Guggenheim Fellow, he is a contributing editor at Harper’s Magazine and also writes for The New York Times, London Review of Books, The Wall Street Journal, GQ, The Atlantic, and many other publications. He is a professor of philosophy at the University of Missouri in Kansas City, where he lives with his wife, the writer Amie Barrodale, and three daughters.