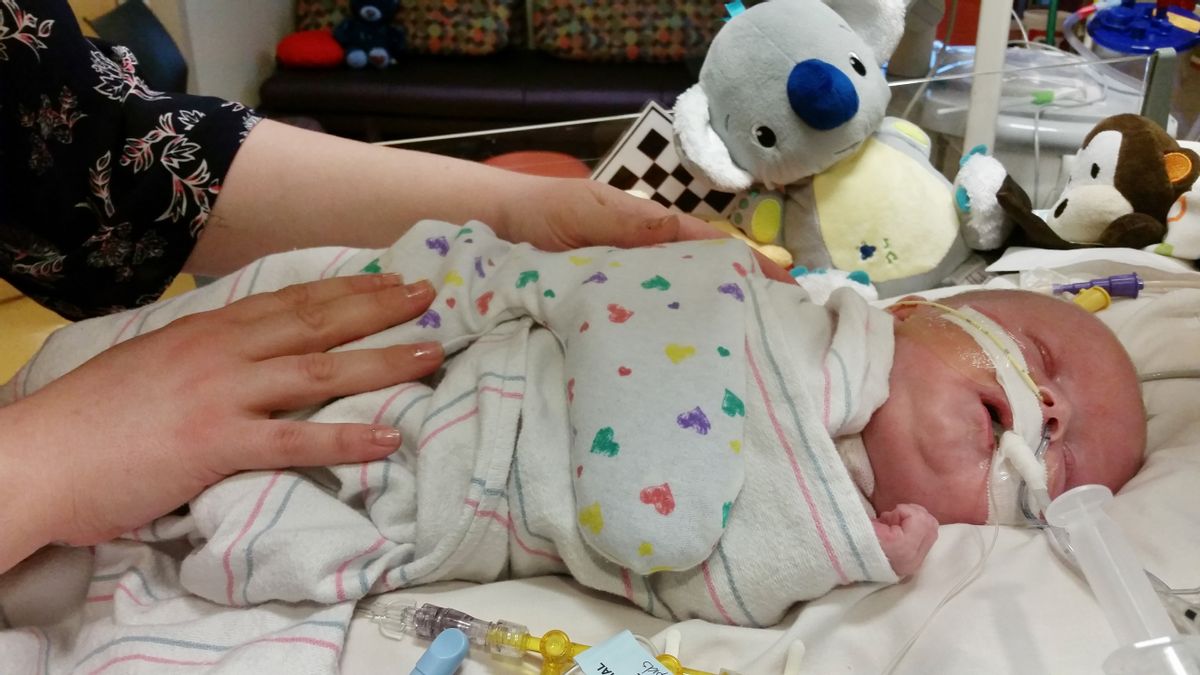 PHOENIX (AP) — Caylyn Otto bought a bracelet for her unborn son, but not for his baptism.

"I pictured it being on an urn or being buried with him," Otto said. "I never thought he'd get to wear it."

But now instead of planning his funeral, the Mesa, Arizona dental assistant can start planning her son's future. Born nearly seven weeks early, Oliver became one of the youngest heart transplant recipients at Phoenix Children's Hospital last month. He will need to be hospitalized a few more weeks. But doctors say Oliver, who was due Feb. 20, has been doing remarkably well post-transplant.

Otto said doctors noticed about 20 weeks into her pregnancy that Oliver's heart was significantly enlarged. At an appointment a month later, the heart had only gotten bigger. The couple, who have a 20-month-old son, was then told to be prepared for their baby possibly being still-born or to consult with hospice caregivers.

Oliver was born Jan. 5 with a heart the size of a 5-year-old child's with a large left ventricle, Otto said. Dr. John Nigro, the pediatric cardio surgeon who performed the transplant, said the heart was affecting the infant's lung and kidney development. Ideally, an infant needs to reach a gestational age of 36 weeks before undergoing a heart transplant, according to Nigro. But Oliver was put on the transplant list.

To everyone's surprise, a donor heart became available a few days later. Though Oliver was not yet at the ideal age, the surgical team decided to have him go through the 10-hour procedure.

"If you get the perfect donor, you may never get that donor again," said Dr. Daniel Velez, who was in charge of procuring the heart and making sure it met all the requirements needed for Oliver.

Velez said the hospital conducts about one heart transplant a month. But the last time the procedure was performed on someone as young as Oliver was about a year ago. Nigro said everyone has been pleasantly surprised at how Oliver, who now weighs 7 pounds, is coping.

"He's a real fighter. There's no question about that," Nigro said.

Oliver will have to be on immunosuppressant drugs and be constantly monitored for the rest of his life. But there's no reason not to expect that he can't go on to live a normal life like going to school and playing sports, Crawford said. He said now they can joke that the size of their son's heart was an indicator of who he is as a person.

"That's been the joke: He had too much love. He had to give it away," Crawford said.